Snow is currently ramping up for southern Colorado and northern New Mexico (Snowing moderate at Telluride- Purgatory, and Taos). This eventually slices through central and northern Colorado with winds shifting from S-SW to W-Northwest. The long term forecast looks really exciting to the extent that several feet are likely for many areas of the west during Thanksgiving week.

The storm that is currently underway over the 4 corners will bring decent storm totals (7-13) to many areas favored by S or SW flow initially (Purgatory, Wolf Creek). Northern New Mexico will also perform well from this storm.  The storm from Wednesday looks to have dropped from 6-10 inches in the southern mountains of Coorado (Webcam at Purgatory was at 6-7, and the snow water equivelant on Wolf Creek Pass at almost an inch of water).  The storm was warm so even an inch of water for Wolf Creek may have come in under a foot (Not reporting totals yet this morning).  In Arizona a nearby snowtel to the Snowbowl near Flagstaff appears to be at 14 inches.  We suspect higher amounts fell at the ski area but do not have any official reports.

In looking at the models I have high confidence in areas north of Durango (Purgatory, Silverton) with winds a bit more southerly than SW. Wolf Creek favors SW so amounts may be a bit lower further east. Purgatory can do better with the southerly flow.   The radar echoes over Telluride appear strong this morning.  While Telluride does best with NW winds there are plenty of storms that I chased with SW winds that overperformed simply from the positioning of the low-pressure system.  Currently, as of Thursday morning, 6 inches is on the snow cam at Telluride (Snow from Wednesday and still snowing).   Snow will also extend into Crested Butte/Aspen and eventually the I-70 area mountains later Thursday.   Precipitation is already underway on the western slope near Grand Junction.  Peak snowfall along I-70 will be Thursday afternoon or evening.  While the southern and central mountains of Utah and Colorado are favored there should be some decent surprises even along I-70 by late Thursday night.

Winds shift to the west and NW late Thursday so areas along I-70 start performing.  Models show 5-10 inches for many locations.  With a westerly wind initially Beaver Creek would be a likely suspect to watch followed by areas into Summit County (Breckenridge should perform well in this pattern).  All areas of northern New Mexico and Colorado will be reporting new snow on Friday morning.

Models are also very bullish for Taos where up to 12 inches are possible at the summit by late Thursday night.

If I were chasing powder I would start in the western areas of the 4 corners today storm skiing the San Juans and move east towards Taos or north towards the western I-70 corridor for Friday morning.  Snow showers will still be falling over most of north/central Colorado on Friday morning with southern areas weaning.

Below: You can see the deepest snow in the 4 corners, especially northern New Mexico and a wide area of southern and central Colorado.  Moderate amounts will be found further north or east along I-70 later on Thursday afternoon and evening with snow showers continuing on Friday. 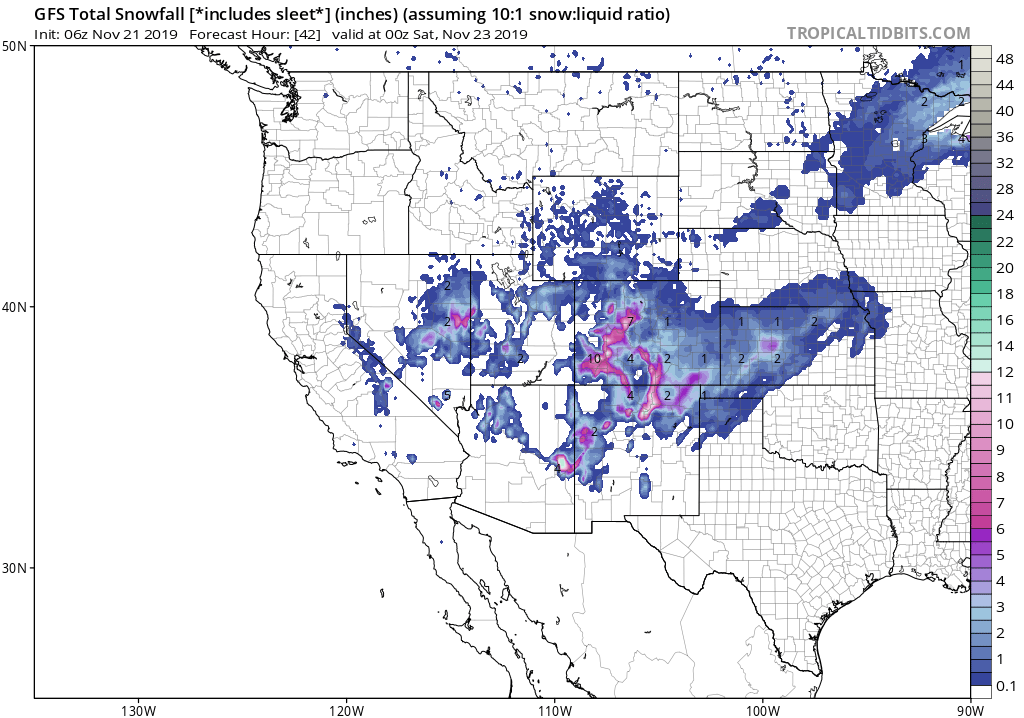 The extended forecast looks really exciting!  I am going to be brief and to the point.

A decent trough enters the Pacific Northwest, BC by Friday night or Saturday. Decent amounts of POW are likely for the Cascades this weekend  (OR/WA). That system takes a path while weakening somewhat over Idaho, Utah, Wyoming, and Colorado early next week (Moderate amounts likely in many areas). The models seem a bit more bullish for Colorado especially Monday night into Tuesday.  Peak snowfall for the west will start this weekend for the Cascades and end over the Rockies early next week (Monday-Tuesday timeframe).

It even gets better!  Models show another deep trough moving ashore mid next week, taking Pacific Moisture on a southern path along the California coast before moving inland over the central Rockies by Thanksgiving.  Snow is likely for the Sierra and much of the west during this timeframe.  Amounts may be significant in some areas but with this storm being 7 days out confidence is only moderate at this point.  Stay tuned to a snowy forecast.

Below: Sneak peek at the total snowfall for many areas of the west during the next 7 days!  This is combined snow from 3 systems including the one underway on Thursday.  It’s about time!  Game on!  Loving this map! 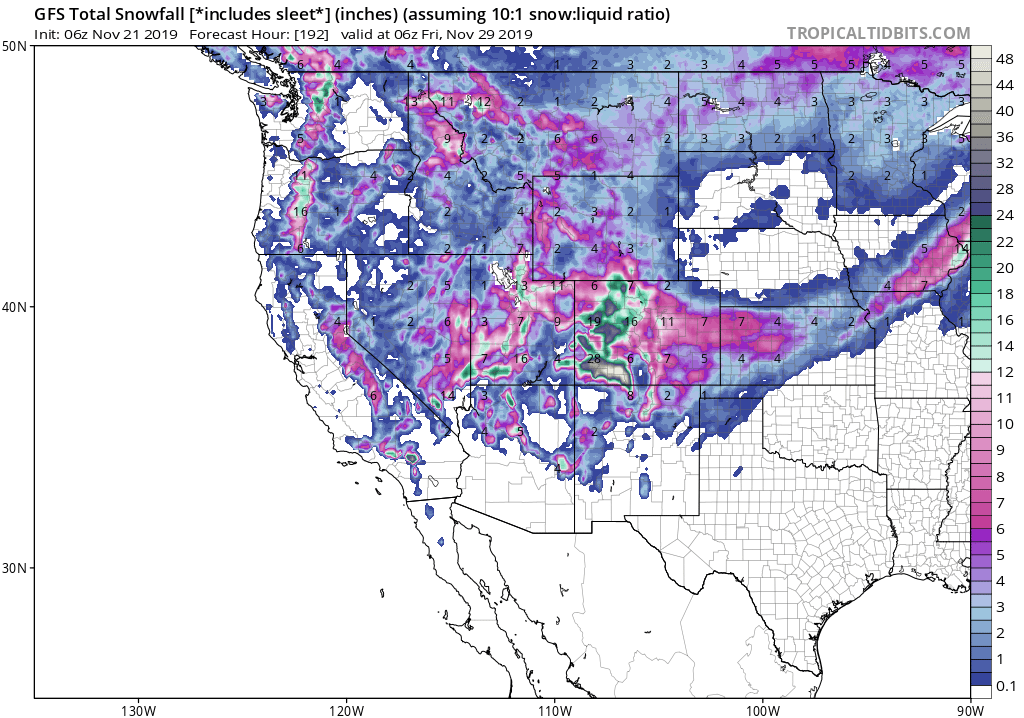 JOIN OUR CONCIERGE FOR SOME DEEP CHASES THIS SEASON!

Please support Powderchasers by either joining the powder concierge or making a donation for our powder forecasts. The Concierge gets you custom chase forecasts and travel tips. The donations are used to support our forecasts. Any subscribers regardless of level will recieve a $75 dollar discount code for a Mountain Collective Pass.