On Thursday, a Jackson local experienced an extremely close call after triggering a wind-slab avalanche on Disappointment Peak in Grand Teton National Park reports the Jackson Hole News and Guide. The 32 year-old skier has been identified as Rene Etter-Garrette.

The slide occurred after Etter-Garrette performed a ski cut above the Spoon Couloir during his descent. Once the ski cut was made, a wind slab 40 feet across and approximately 1 foot deep released above him. The slide would ultimately carry Etter-Garrette roughly 1,200 feet down the couloir and deposit him just above Amphitheater Lake with his head and arm free of snow.

There were two others in the group at the time of the incident.

Brian Close of Wilson, WY watched the avalanche sweep the skier down the couloir and reported the incident shortly after. Luckily, a small weather window allowed a helicopter to assist in the rescue effort. The rescue effort was aided in large part by his resourceful partners, who included Close as well as Mike Bessette of Jackson, WY.

After discovering the victim’s location, his partners realized that Etter-Garrette had suffered a leg injury. Acting quickly, they fashioned a makeshift splint using an ice axe, shovel handle, and ski straps. That splint made it possible for their group to transport the victim to a landing zone near Amphitheater Lake. Once there, the helicopter executed a successful extraction. The victim was later admitted to St. John’s hospital in “good condition.”

A GTNP press release praised the group for their resourcefulness saying, “rangers commend the party for their self-rescue to Amphitheater Lake and their ingenuity in the creation of the splint,” 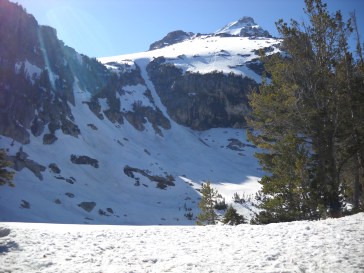 The Spoon Couloir In May | Photo Credit: Barclay Idsal

Observer Notes: Three skiers hiked up the couloir. The first skier down did a ski cut and was caught, carried down the couloir, buried except for his head and arm, and injured. A helicopter rescue ensued. Second Skier In A Week Gets Caught, Injured In Avalanche Outside JHMR