While we all love to dream about shredding the best mountain bike destinations in North America, the sad fact is that most of us will only ever get to visit those places… and we have to live somewhere else to pay the bills. So if you can’t spend 365 days per year riding in a world-class MTB destination, your local trails should at least be respectable. That’s why we put together this list of the top 10 North American cities for mountain bikers to call home.

We began by limiting our choices to the top 100 metropolitan statistical areas in the United States. And, if a Canadian city was to make the list, it would have to be large enough to make it into the US’s top 100. Unfortunately, limiting our choices in this way means that there are dozens of smaller towns with fantastic mountain biking that don’t qualify. (Bend, Oregon comes to mind.)

With this list in mind, we opened it up to our editorial team, with a combined total of more than 100 years of mountain biking experience, for nominations. After building a possible list of options, we argued and fought amongst ourselves, trading good-natured insults back-and-forth, until we finally arrived at this top 10 list.

If you’re looking to relocate and the quality of the local mountain bike trails is a determining factor, rest assured that all of these cities make great choices. 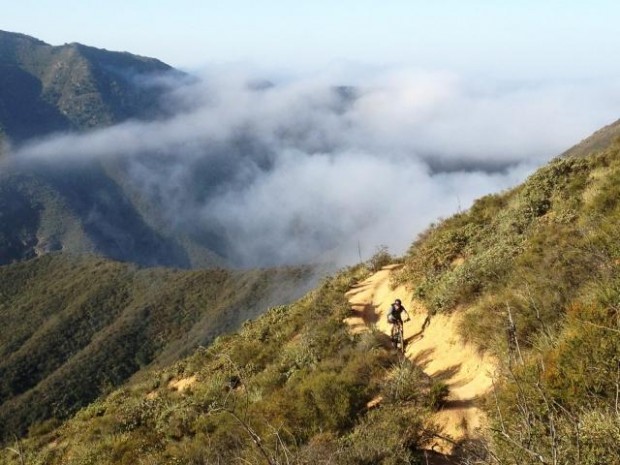 You might not think that the second-largest Metropolitan Statistical Area in the United States would be a good place to be a mountain biker… but you’d be wrong. The hot, dry San Gabriel mountains offer up a wild maze of trails and a 12-month-per-year mountain biking season, with many more trails (like El Prieto) starting right from the edge of the city, or even completely contained within the city itself (like Turnbull Canyon).

To be completely honest, there aren’t many places where you can drop 5,000 vertical feet in a shuttle run and end up at a burger joint or a bar, but in LA you can shuttle high up into the Los Angeles National Forest and ride your mountain bike all the way back down the mountains into the burbs.

Yeah, there are probably some downsides to living in So Cal… but a lack of mountain biking opportunities isn’t one of them. 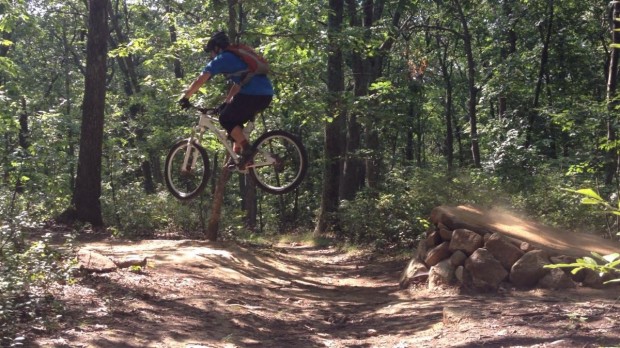 On this list, only Los Angeles is larger than Boston in terms of population. But LA doesn’t feel like it’s as densely populated, which makes it all the more remarkable that an East Coast city like Boston boasts 40 mountain bike trails within 25 miles of the city center.

The mountain biking in and around Boston could not be more different than the riding found in the western cities on our list. Technical trails like those found at Lynn Woods, the Vietnam Trails, and Gilbert Hills State Park are chock full of rocks, roots, and steep climbs through dense forests. Middlesex Fells and Harold Parker State Forest feature excellent cross-country trails for those looking for slightly milder two-wheel punishment. Russell Mill, Wompatuck, and Cutler Park round out the list of popular mountain bike trails near Boston, most of which are maintained by NEMBA. With so many trails to choose from, deciding on an after-work ride in Boston can be tough! 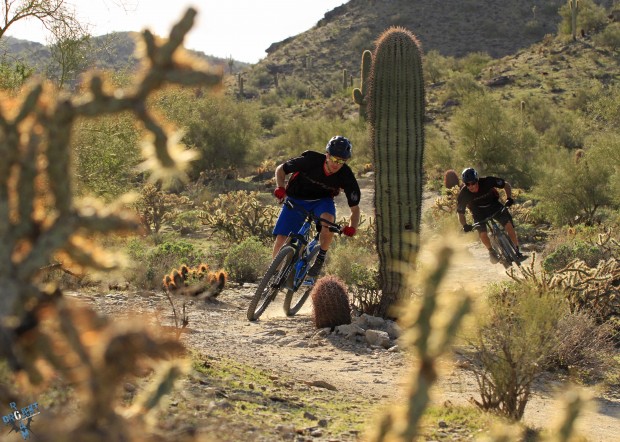 By land area, the Phoenix metro complex is one of the largest in the nation. The great valley that hosts this giant city just happens to be surrounded by exceptional mountain biking in the great Sonoran Desert. The great South Mountain beckons to technical masochists. On the East side, the Gold Canyon serves up a variety of singletrack along with jaw-dropping scenery. To the Northeast,McDowell Mountain Park provides dozens of miles of quality trail, some of it purpose-built for biking, and to the Northwest, you will find seemingly-endless miles of cross country delight on the Black Canyon trail. While the summer heat is not just oppressive, but dangerous, you can ride here when the rest of the nation is frozen—and night riding remains an option in the worst of the summer heat. 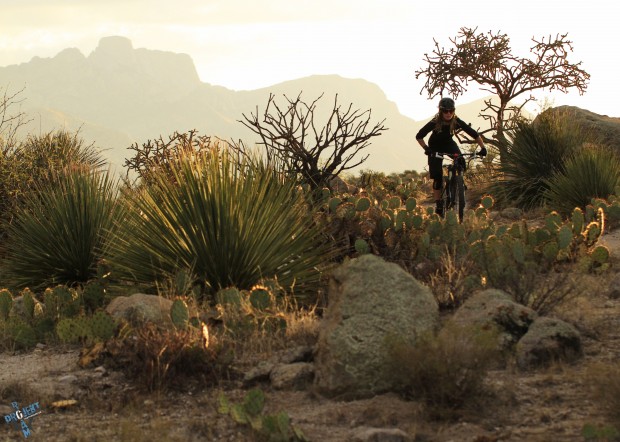 The Sonoran Desert extends further south through Tucson, which also sports plenty of excellent riding and even more, if you can believe it, of those giant saguaro cacti. Despite being further south, Tucson is usually a few degrees cooler owing to its slightly-higher elevation. The must-rides here include the truly world-class 50-Year Trail and the super-flowy Fantasy Island. If you want to ride through the densest saguaro forest around, hit up the Sweetwater Preserve 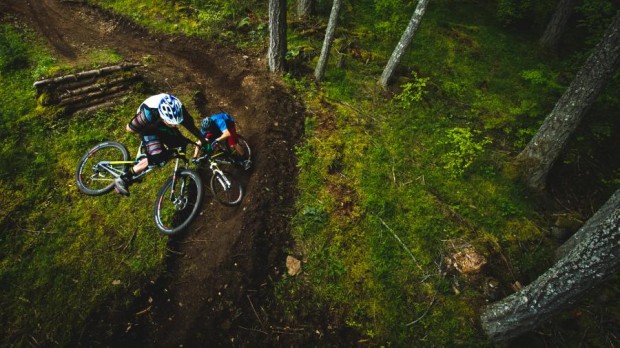 Vancouver is really a no-brainer. As the most densely-populated area in all of British Columbia, Vancouver is the epicenter for all things BC, and consequently, all things mountain biking in BC. With tons of gnarly North Shore riding surrounding the city and the massive collection of trails on Vancouver island, there are a plethora of trail opportunities a stone’s throw from the third-largest population center in Canada. Add in the close proximity to Whistler and all the other world-class BC destinations, as well as killer riding just south of the border in Washington, and there’s arguably no other major city in the world with as much fantastic mountain biking as Vancouver. 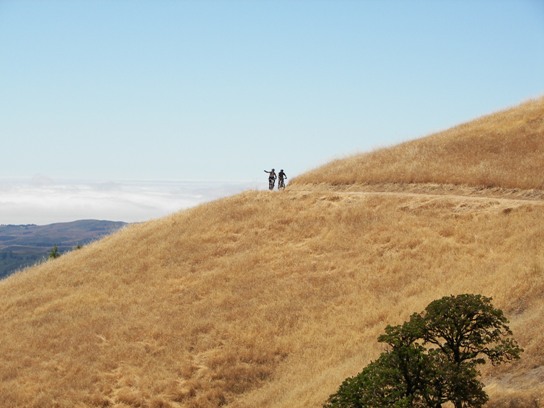 Located on the southernmost end of the San Francisco Bay, San Jose is surrounded by an abundance of fantastic singletrack mountain bike trails. While the nearby East Bay-area suffers from a dearth of singletrack, San Jose doesn’t share that problem. With trails starting from the outskirts of town, world-class singletrack in the San Francisco Peninsula that’s older than the sport of mountain biking (such as El Corte De Madera), and world-famous trails located south between San Jose and Santa Cruz (such as the Soquel Demonstration Forest), the city of San Jose has a trail résumé that could go on for thousands of words. Factor in the beautiful year-round weather, and it’s no wonder the mountain biking population here continues to explode. 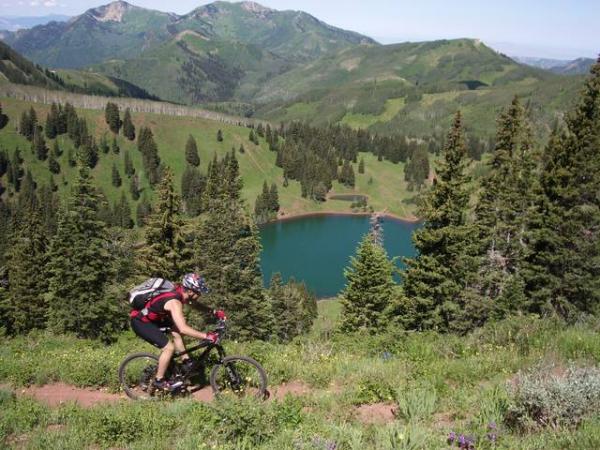 There’s more to Salt Lake City mountain biking than the Wasatch Crest Trail.  While that ride is a classic one, there are others, like the Bonneville Shoreline Trail, that can be accessed right from downtown SLC.  The most popular section of the trail starts at Hogle Zoo and goes all the way to City Creek Canyon.  Plus, there are also northern and southern sections of the trail extending as far south as Draper and as far north as Ogden.

The canyons surrounding SLC are filled with trails such as the Pipeline Trail in Millcreek Canyon, Big Spring Hollow down in Provo, and classic rides in between like Mill-D and Desolation Lake in Big Cottonwood Canyon.

If what’s in Salt Lake isn’t enough for you, you can drive 30 minutes up Parley’s Canyon to Park City, where over 400 more miles of singletrack bike trails await. 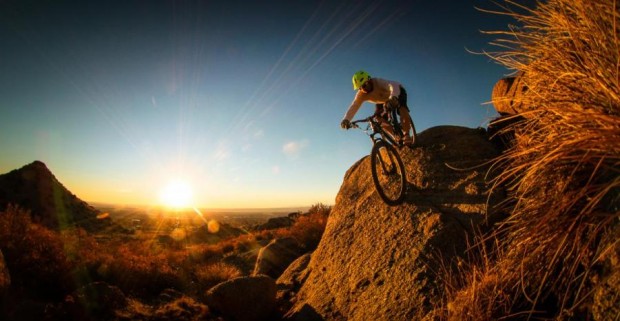 Similar to Colorado Springs, Albuquerque is a medium-sized city, close to 6,000ft, bounded on one side by a great mountain range, enjoying a bike-friendly climate—and loaded with quality singletrack. The centerpiece of riding is the foothills trails (north and south systems) with great desert riding through rocks and cactus in the foothills of the Sandia Mountains. The backside of the Sandias has the challenging Faulty Trail, and to the southeast lies the Manzanita Mountains with a hundred-plus miles of singletrack.

Everyone who comes here must ride the Otero and Tunnel Canyon routes. Northwest of town lies the totally unique White Mesa to complete the variety. Bonus: Albuquerque is inexpensive to visit, and you can eat like a king for very little. 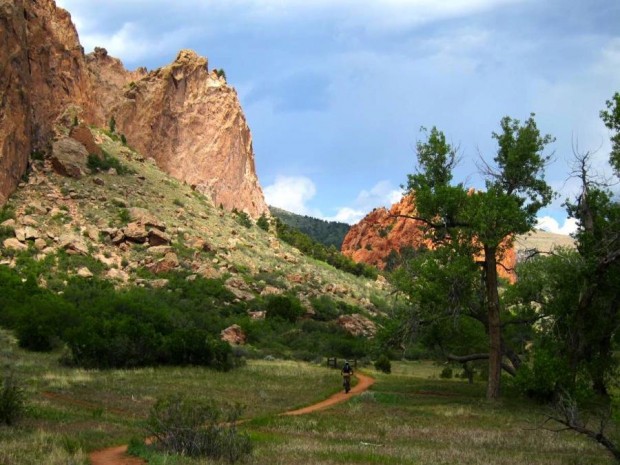 I had serious reasons for settling in Colorado Springs–chief among them was the quantity, quality, and variety of singletrack. Palmer Park sports 20+ miles of mostly technical singletrack right in the middle of town. Also within the city limits are the slightly-smaller Ute Valley Park, Red Rock Canyonwith its otherworldly scenery, and Cheyenne Mountain State Park, with another 20+ miles covering everything from wide and buff to brutally rocky.

Living on the edge of town, I can access copious singletrack without ever getting in a car, including the wicked Section 16, the pleasant Stratton Open Space, and all the great Cheyenne Canyon rides like Captain Jack’s. While the surface can be a bit gravelly at times, that means trails drain well and rain never stops us from riding. Occasional warm winter days keep us riding near year round. 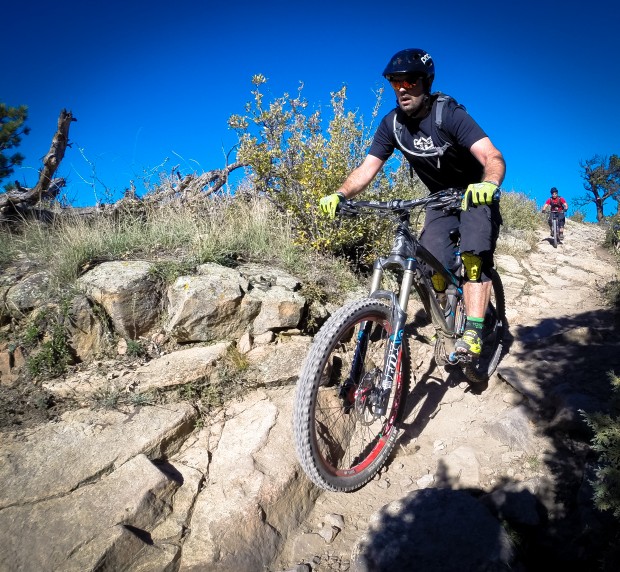 Most of the great Colorado Springs riding is courtesy of the Front Range of the Rocky Mountains, which extends northward across the west side of the Denver megalopolis and up past Boulder. Those living in Denver can choose from huge climbs (Mt Falcon Park), awesome descents (Apex Park), extreme technicality (Dakota Ridge), and easily-accessed suburban trail systems (Green Mountain Park).