POWDER ALERT- CANADA- POWDER WATCH SIERRA AND ROCKIES WITH THE FIRST SIERRA STORM DUE NEXT WEEK!

Coastal and interior BC will benefit from heavy snow this weekend into early next week with 2 systems. Snow levels are rising to 5500-6500 feet. Colder air arrives by Monday/Tuesday and drops into the Sierra bringing its first measurable snowfall for the season. That moves into the Rockies mid to late next week.

The first measurable storm is likely to reach the Sierra by early to mid-next week with much colder temperatures and snow likely bringing some double digits to many ski areas.

The past 36 hours brought mid-winter-like conditions to the Rockies, especially for central and northern Colorado where up to 19 inches fell. The I-70 corridor was getting blasted Thursday morning with the Beaver Creek cam jumping to nearly a foot by 5 AM. I-70 closed briefly on Vail Pass with accidents closing the eastbound lanes. Other big winners included the Aspen area mountains where 12-18 inches have fallen in the past 36 hours. Bases in the Aspen area are sitting around 22 inches currently very close to what we have seen in northern Utah above 8500 feet. 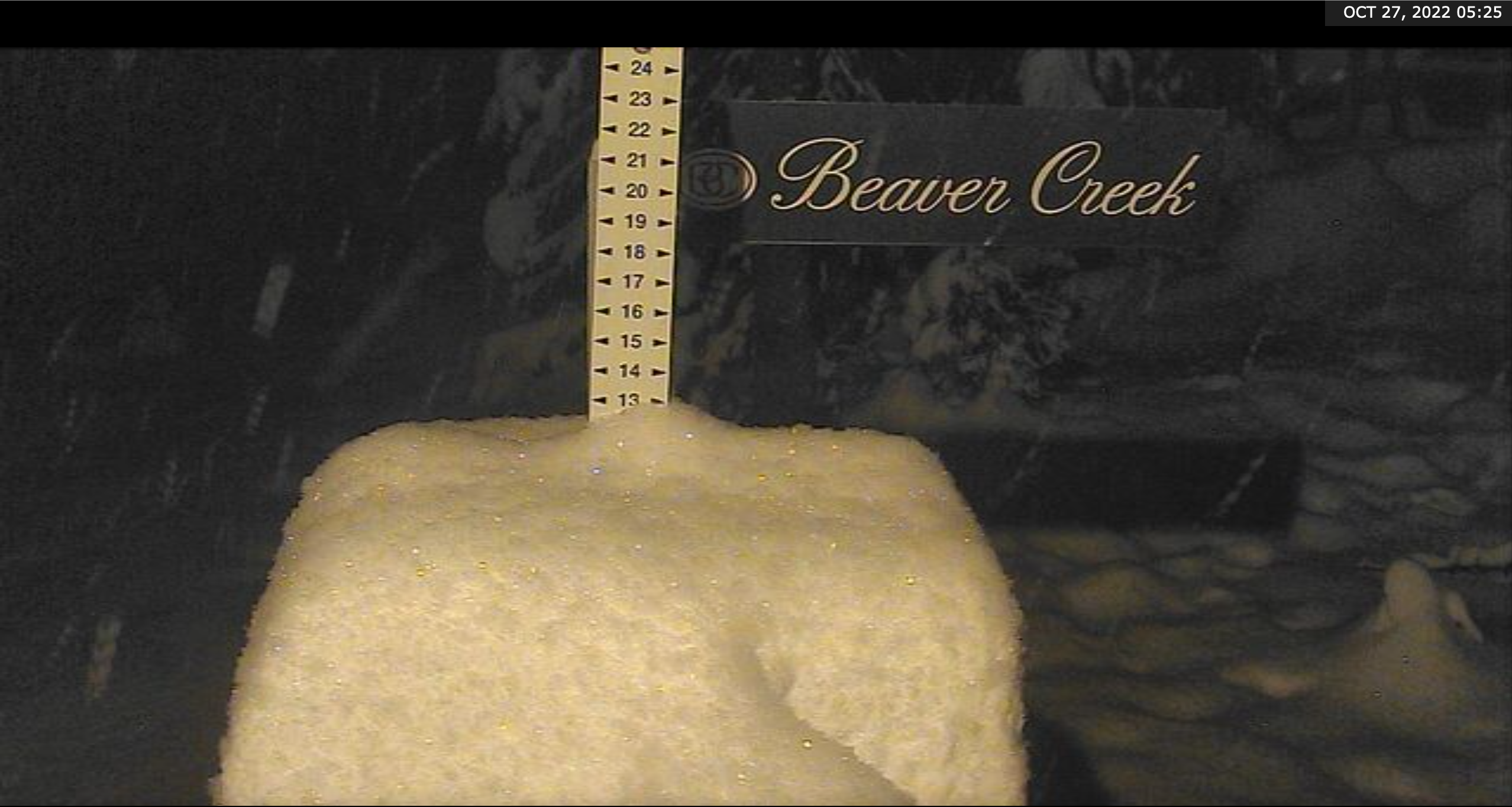 It’s been a colder-than-average and wetter start to winter for much of the PNW, and the north-central  Rockies with averages well above normal. This is a classic signature of La Nina. The colder temps have allowed some snow to build up even at lower elevations.

Below: Snow water equivalent for the PNW and Rockies (Total water if you melted the snow) is well above normal for many areas. While this map is impressive for October 28th, it is not representative of how things will look as more ski areas open in November and December and can change drastically with just 1 storm. Also, remember that historic snow totals in September/October are low so any single storm can escalate these numbers as this map shows (Dream map for some areas). Folks are already skiing powder in the backcountry at upper elevations in the Rockies and more snow is on the way next week. 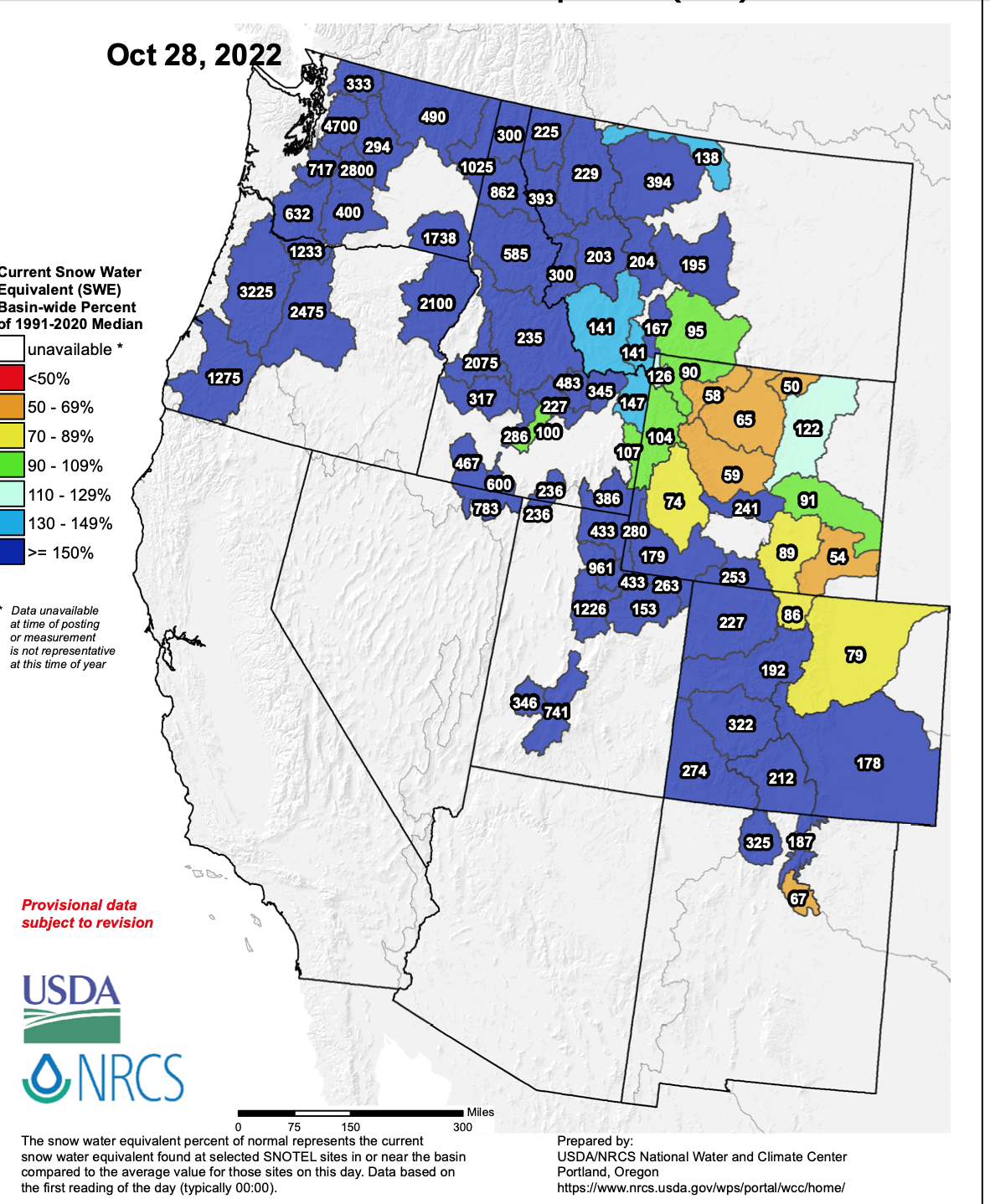 The next series of storms will impact British Columbia and Alberta this weekend and early next week with some significant storm totals at upper elevations. Look for the northern BC coast (North of Whistler) near many cat and heli operations (Bella Coola) to pick up several feet of snow in the next several days. Whistler will slowly add to its base above 5500 feet. Resorts inland towards Revelstoke, Rogers Pass, Kicking Horse, and Alberta (Lake Louise) should score a foot or more especially late this weekend into Monday. Less snow is likely in the southern regions of Alberta and BC. That system moves south next week.

Below: Total Snowfall in CM for BC and Alberta through Monday night favors the northern coast range with decent numbers also expected for upper elevations of Whistler and further inland later this weekend. 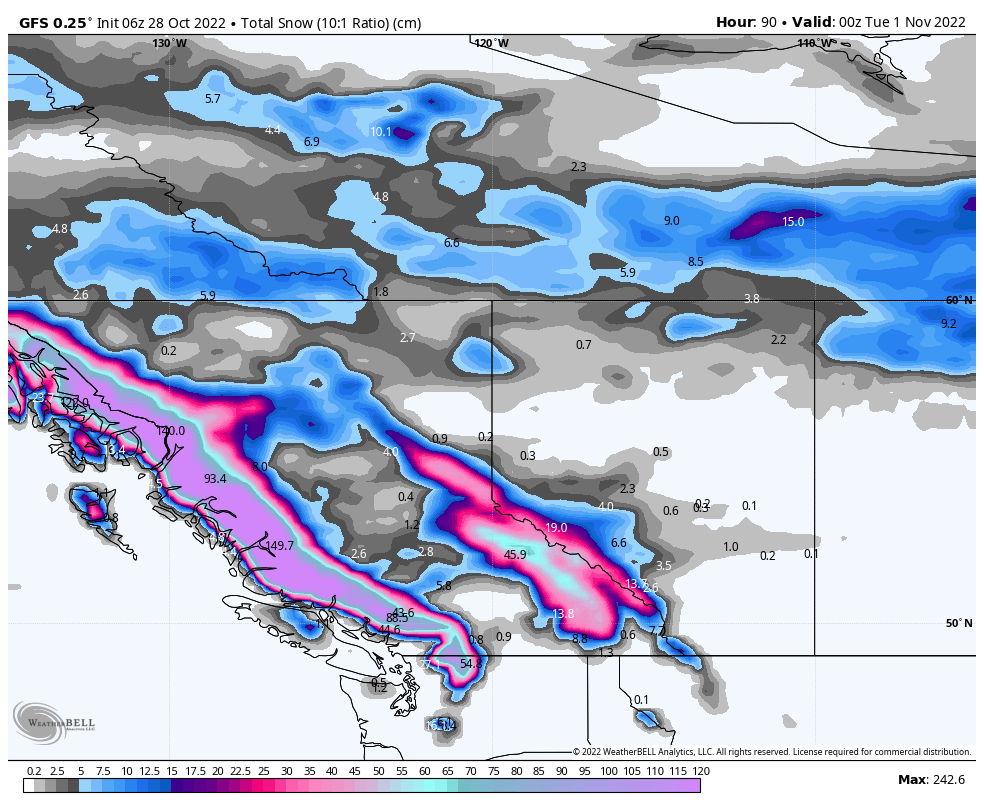 That system will move south along the Pacific Coast with a cold front likely bringing the Sierra its first measurable snow event of the season in the extended forecast.

The warming that is occurring in the PNW will wean with cold air reaching the Cascades by Monday. That cold front will kick off snow showers early next week (WA, OR) reaching the Sierra by Tuesday afternoon. An inch of water or more is likely to overspread the Sierra with a foot or more snow likely for many Ski areas. This is a fast-moving storm but combined with cold temps and decent moisture be prepared for winterlike driving conditions even in the Tahoe Valley. You might want to put on your snow tires on soon.

That system looks to overspread many areas of the Rockies under SW flow dropping over the 4 corners and pushing snowfall north over a wide area of the Rockies. This might be a decent storm for many areas including the southern regions of UT, CO, and the northern flanks of Arizona. Moisture will be pulled north under SW flow initially before winds veer to the NW. Many ski areas will see some snowfall next week in the Rockies and desert Southwest.

Below: Cold front reaches northern California by Tuesday night dropping temps and snow levels to near 4500 to 5K. 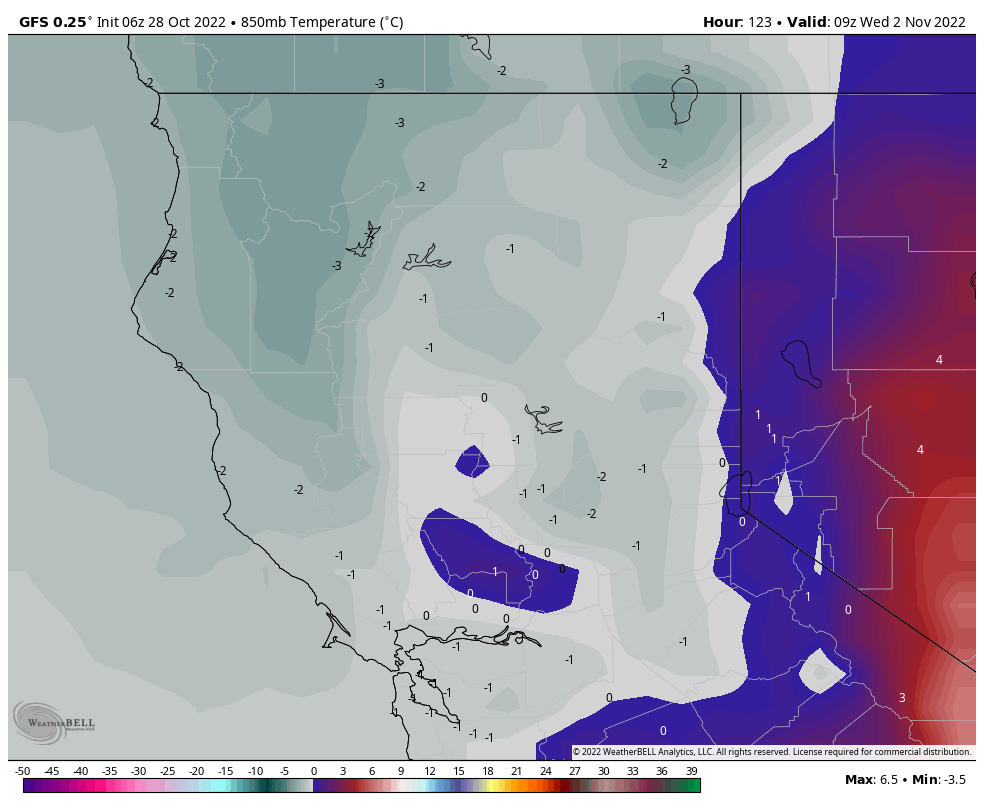 Below: Confidence is low on amounts being 5 days out with current models advertising a foot or more snow for much of the Tahoe Basin extending south. Confidence is high of this storm to evolve with an update on snow totals coming in a later post.

Below: Low pressure is digging south along the California Coast and will push inland over the 4 corners by mid-next week (GFS). There is good model agreement between the European and the Canadian models which gives us good confidence in this storm. 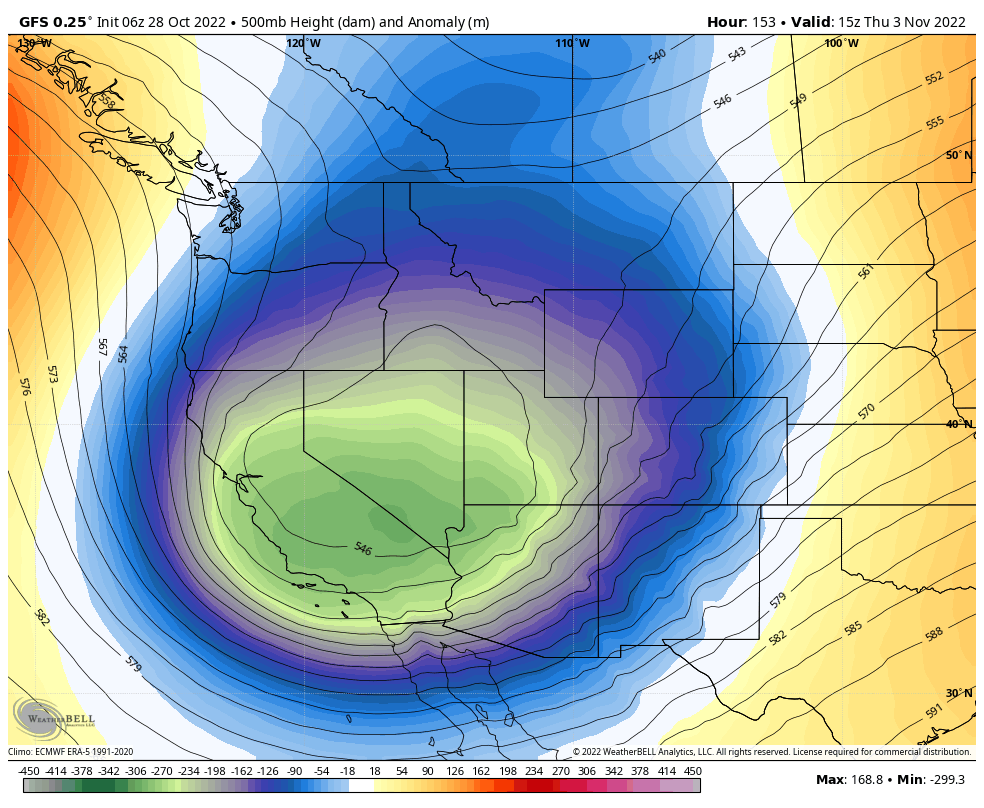 Below: 7-day snowfall ending Friday, November 4th shows higher snow totals for Canada earlier in the period with the Sierra and Rockies grabbing snow mid to late next week. Confidence in these maps, especially beyond the 3-5 day period is low, however, it’s likely that a solution similar to this will evolve. 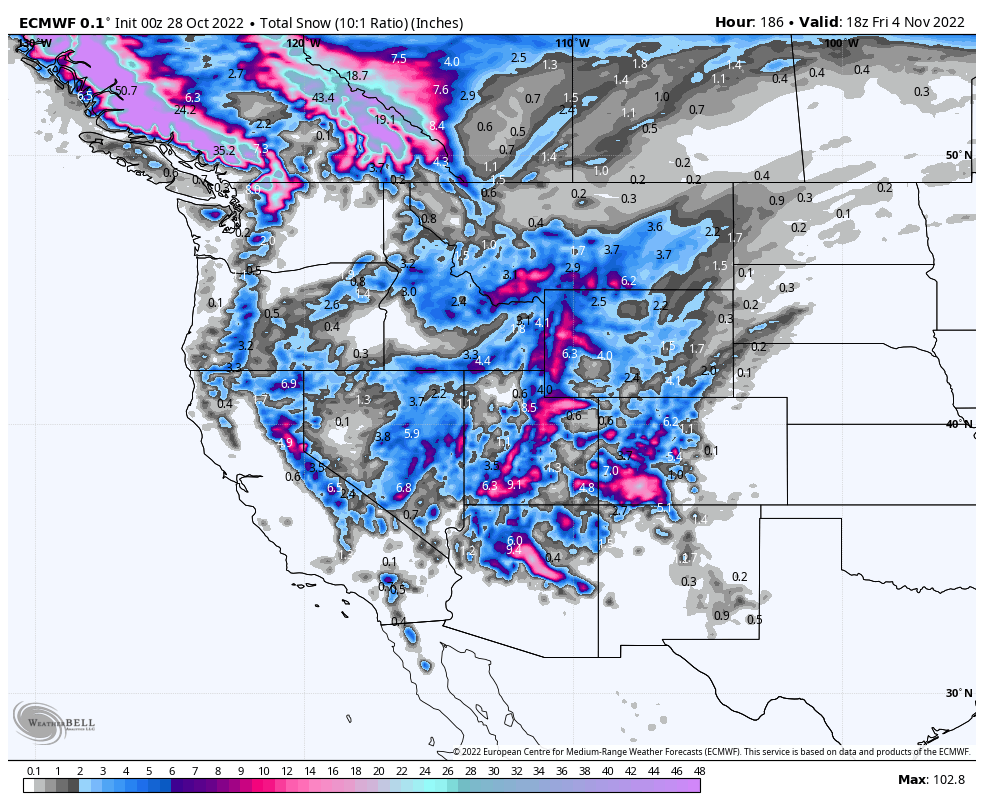 Please join our concierge program if you want to chase the deepest resorts of the season! This will provide you custom chases, last minute advice, staging locations and how to score the deepest runs of the season. You can support our forecasts with this service or a donation here. you can sign up for free powder alerts at www.powderchasers.com

It’s only late October! While it’s been well above average in many areas the proof in the pudding on where to plan a vacation or who will see the most snow by December is a wildcard. Just 1-2 storms can take an area from zero to hero (Remember the Sierra last December).  Thanks for following Powderchasers.com “It’s only visible if you know it’s there.” -Head Tram Mechanic Mike Vase The folks at Jackson Hole gave the (…)