Check out this incredible moment back in 2017 when Sewa Kroetkov called a penalty on himself in the championship round of a skating competition citing “As much as I wanted it to count I did have a little toe drag. So lets be gentlemen, I want a fair game, no bullshit.”
At first the crowd was shocked and then you can see nods of approval from some of the best skaters in the world.

To give a little context The Battle at The Berrics is single elimination flatground skateboarding competition with the same format at a game of HORSE on a basketball court.  You do a trick and your opponent must do the same trick or they receive a letter ect. It however is not as cut and dry as a basketball going into a hoop so there are referees to call out skaters on things like not getting a full rotation or “toe-dragging.”

In the heat of the battle Dutch skater Sewa Kroetkov knew that he dragged a toe and volunteered to redo the trick without intervention from the ref. I’m not sure if there is a cash prize but the bragging rights alone make this a hugely consequential event and Sewa didn’t even hesitate a second because he wanted “A fair game, no bullshit.”

I actually got a bit choked up at this unbridled act of sportsmanship.  Sewa went on to lose the competition to Chris Joslin but thats not what he will be remembered for. All you kids on the playground take note be like Sewa (except for the language). Remember what Knute Rockne said “Win or lose, do it fairly.” 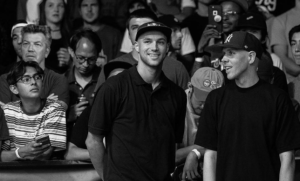