The models for this week look deeper for a broad area of the west than anything since December. April turns into January as significant snow will be falling from the Pacific Northwest through the Sierra (It’s about time), and much of the Rocky Mountain Range. 20-30 inches will be likely for many areas in the west through

Is it April or December?

Below: Total snowfall through Wednesday night highlighting deep totals in most areas of the west except for the far northern Zones that scored deep snow last week. This is more typical of a midwinter storm with cold temps. 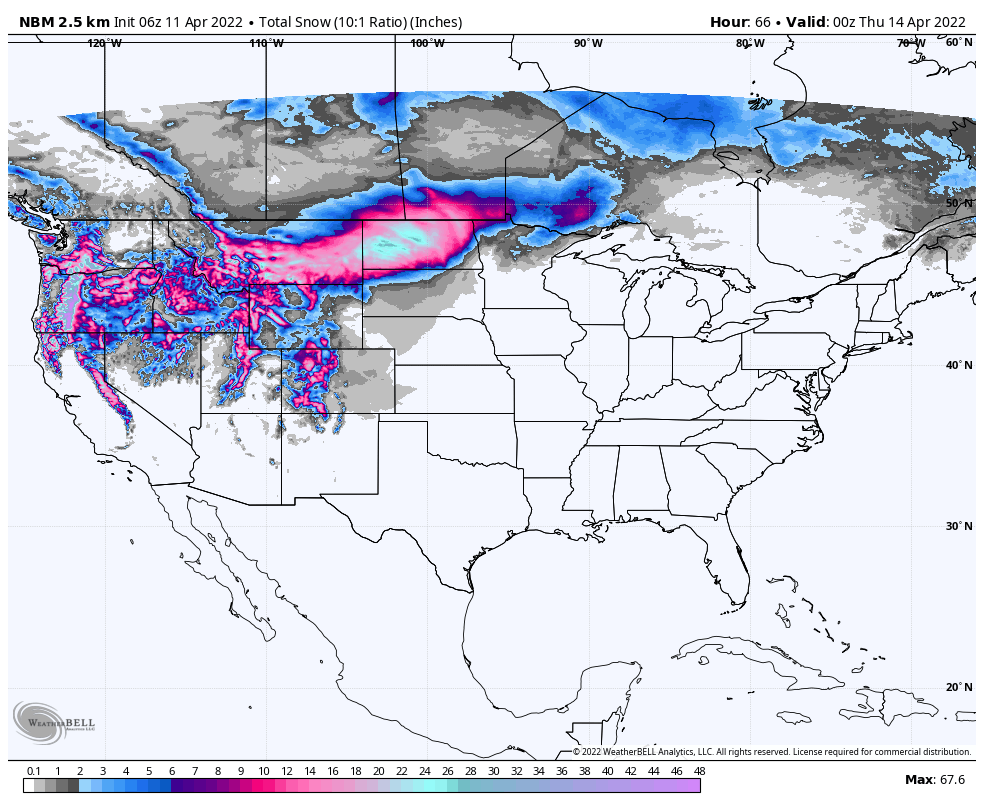 It’s snowing currently from the PNW to the Sierra on Monday morning. The next 3-4 days will feature 2-3 feet for most of Oregon, southern Washington (Mt Rainier), and even 12-15 inches for inland Washington near Mission Ridge.  Snow is falling in the Sierra with chain laws already in effect for the high mountain passes on I-80. It’s possible that the Sierra grabs its deepest week since December, but that’s not saying much for this season right! Temps are cold enough for the Northwest that metro areas just outside of Portland will likely see snow in the upper hills. Can we say Apriluary?

Where to chase powder?

Please check with your local ski areas to see what is open before venturing out. Many areas closed last weekend. The Sierra grabs most snowfall Monday (6 AM to 10 PM) with perhaps 5-11 inches by the time things wean late. Winds will be very strong (Gusts to 100 MPH) so stick to lower elevations with higher odds of lifts spinning. Another storm will bring another foot or more to the Sierra by Tuesday/Wednesday. Here is a list of resorts still open but I can’t vouch for current conditions.

Below: Total snowfall for the Sierra in the next 5 days might exceed 2-3 feet with 3 storms likely. 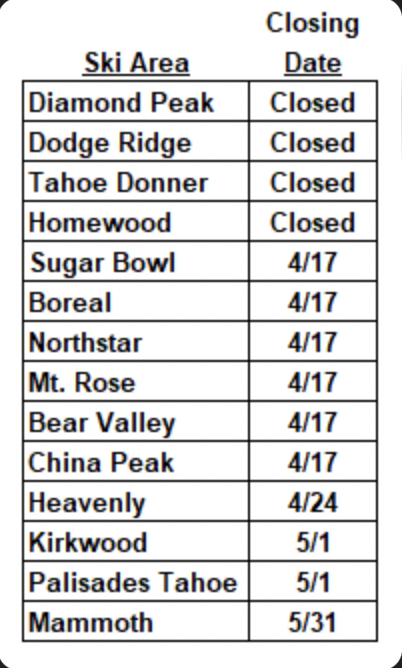 The Oregon Cascades will likely be the deepest bet for the week with up to 3 feet or more likely with very good base depths. Snow continues in the Cascades of Oregon and southern Washington through Tuesday night. Many areas will be digging out all week with new terrain openings as the storm clears out by Wednesday.

Below:  Total snowfall ranging in the 30-40 inch range through Wednesday at Mt Bachelor when averaging out multiple ensemble runs on the University of Utah Atmospheric Weather Page. Nearly all of the Oregon Cascade Ranges will be deep early this week. You may even see rain mixed with some snow in Portland. Don’t put the boards away! 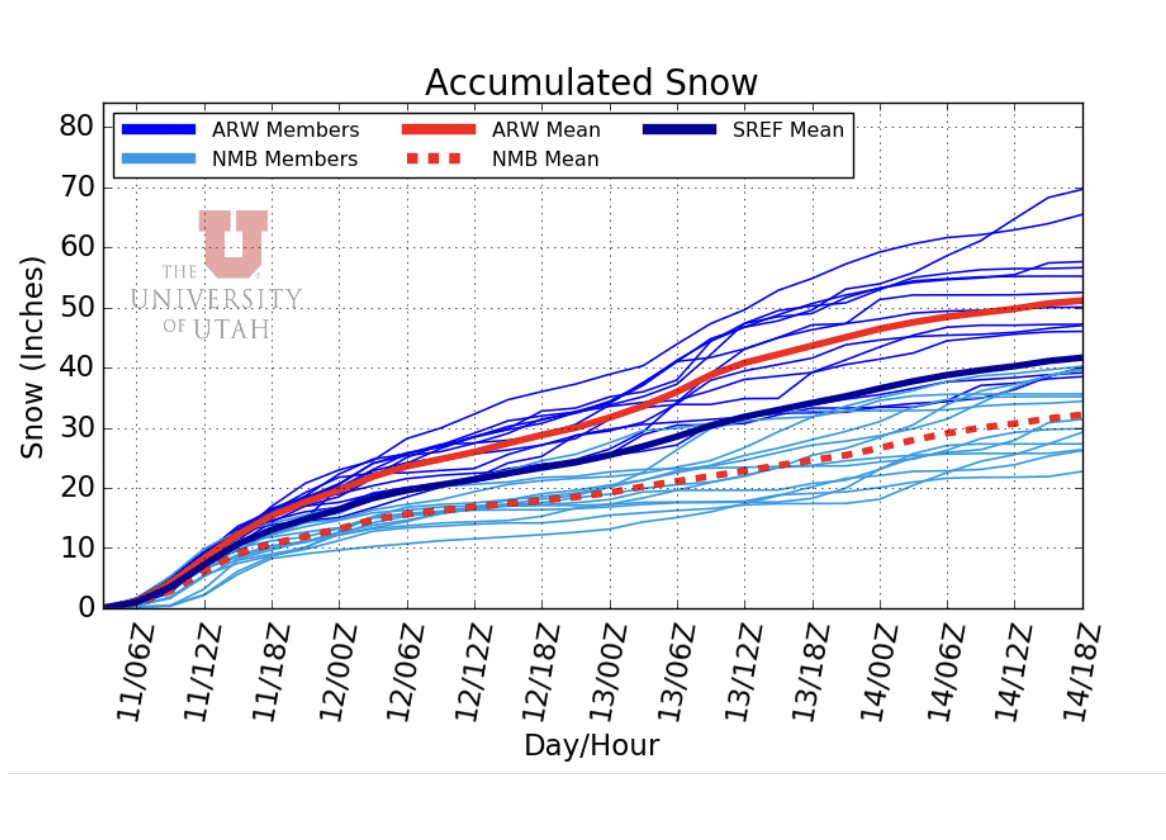 Below: Total snowfall for the PNW through Wednesday night in the 3 foot range for many areas of the Oregon Cascades, with 2 feet possible in extreme southern Washington. (Inland areas of the southern Cascades will score 12-15).

The models are consistent for a deep dump over the Wasatch beginning Monday night into Tuesday (12-15) which starts out windy easing by Tuesday morning. You can’t go wrong with the Cottonwoods, however, it’s likely areas along and north of I-80 grab decent amounts (7-11), especially the Canyons side of Park City (Favored with W-NW flow). You will wake up to double digits in many areas of Utah Tuesday morning.

Below: Total Snowfall for Alta showing up to 30 inches by late Wednesday with several periods of double digits from Monday night through Wednesday morning. The Cottonwoods will be deep, with most of northern Utah scoring big totals (Several resorts have closed) including I-80, Parleys Summit, Ogden Valley, etc.  Monday night into Tuesday will see the highest 12-hour jump. 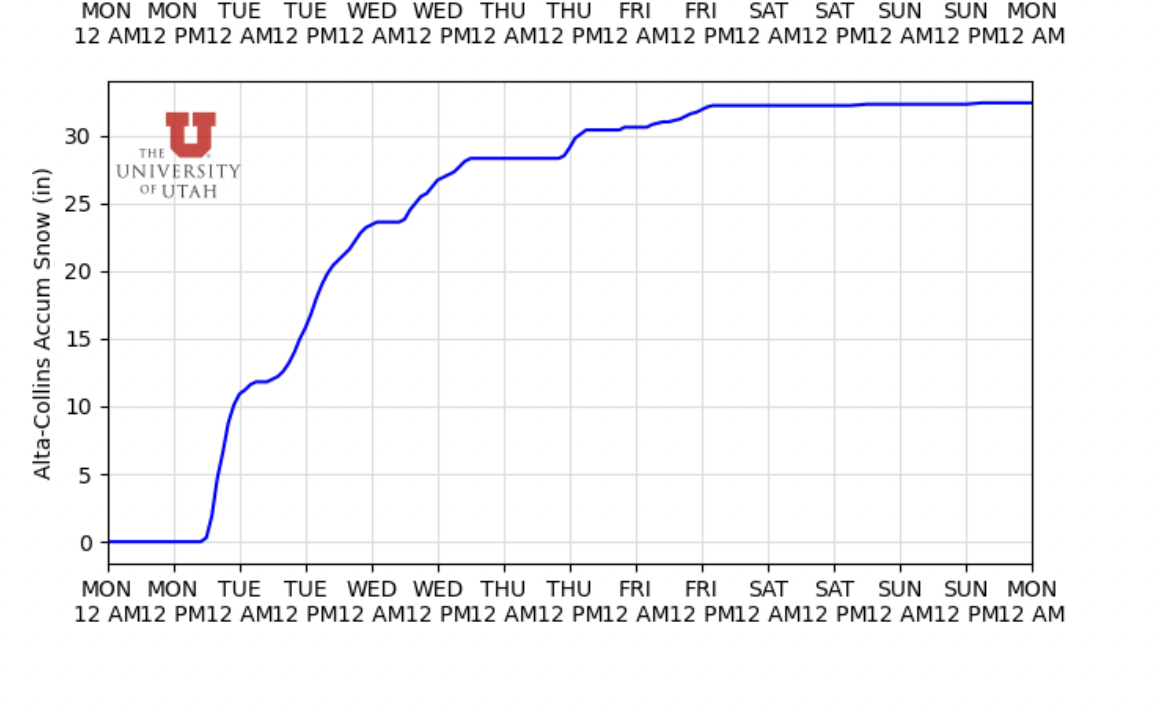 Other notable chases will be in western Idaho (Most resorts closed last weekend), Sun Valley (open), Tetons (JHMR and Targhee are closed), and southern Montana (Big Sky is open). If only this storm could have come a few days earlier. Double digits will be found in many of the above-mentioned locations with cold temps and high quality. Be sure to check your local mountains uphill policy and if venturing into the Backcountry have the knowledge and skills necessary. Remember: Closed ski area terrain needs to be treated as backcountry.

For Colorado, strong winds from the SW will favor the southern mountains initially from late Monday night to Tuesday before shifting W, NW pushing more moisture along I-70 and north. Look for some decent totals near Wolf Creek by mid-morning Tuesday. Other notable spots on the models could land near Crested Butte, Silverton, and Aspen (Late Tuesday AM). The western corridor of I-70 seems favored as well as resorts further south Monday-Tuesday. With the wind shift to the W-NW mid-Tuesday to Wednesday, orographic snow showers with a cold unstable flow will ramp up totals, especially along I-70 (Beaver Creek to Loveland Pass) for moderate totals for last chair Tuesday or 1st chair Wednesday (5-10). Additional snow is possible for Wednesday evening, especially for areas favored by W-NW flow (Breckenridge, Vail, Snowmass, Steamboat).

Instability Snow showers continue for much of Utah and Colorado for some freshening each day through Thursday (Lighter amounts). High pressure appears to move in with warmer temps for the weekend before another storm is possible to move into the Sierra by Sunday.

Below: Another low may move into the west taking a similar track over the Northwest and the northern Sierra by Saturday night or Sunday. This could produce another decent dump for these areas with leftovers hitting the northern Rockies late in the weekend or the following week (Week #2). 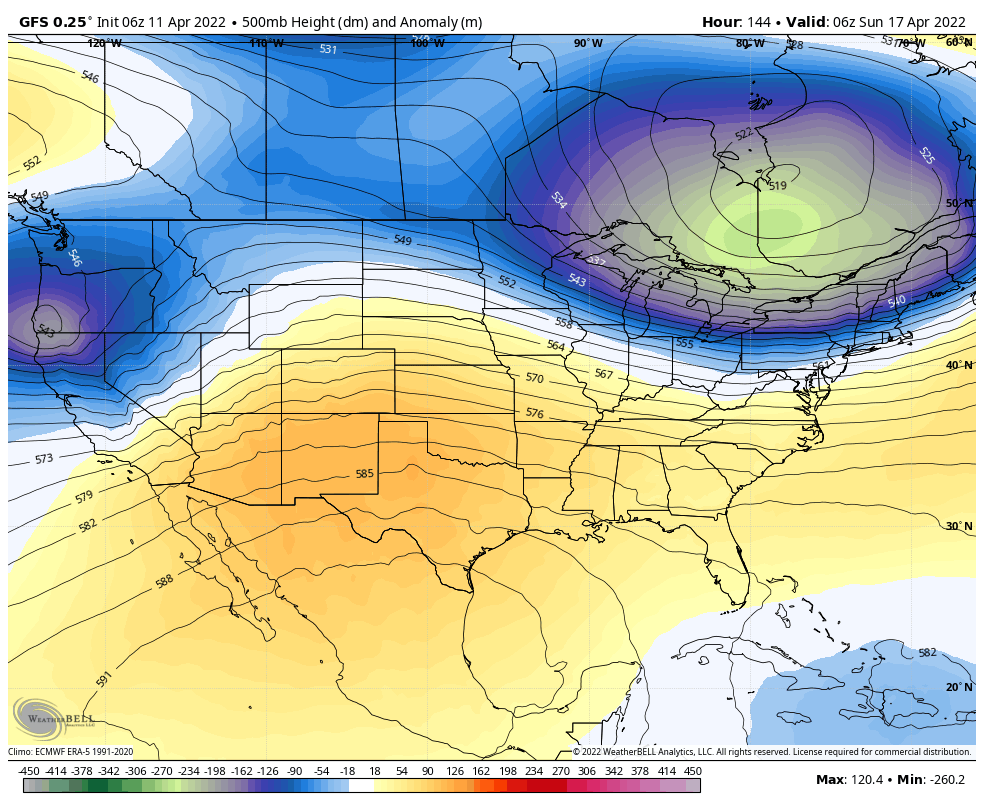 It’s a very active April for sure, and anonymously cold. April and November are sometimes the best times to sneak out the deep powder!  Check out my Instagram feed for the latest in travel and adventure including powder @powderchasersteve

It’s not too late to support Powderchasers for the season as we might be wrapping up our forecasts by April 30th. Please donate if you have benefitted from these broadcasts and simply live vicariously through them.