POWDER ALERT- DON’T PUT THE STICKS OR BOARDS AWAY YET

Moderate cold storm on tap for the PNW in the next 24 hours. The Rockies might score a deep storm early to mid next week with the Sierra finally getting teased as well. The extended looks unsettled.

For chasing powder, consider the Pacific Northwest for late Friday through early Sunday. The best odds of a deep dump will fall near Stevens or Snoqualmie primarily late Friday too early Saturday. NW winds with colder temps will form a convergence zone (Cold air pushing east against the Cascade Range promoting moist lift resulting in enhanced snow showers). Timing is ripe for some good powder (Low density) for 1st chair on Saturday. Baker, Stevens and the I-90 corridor will likely have the highest amounts (6-10). The southern Cascades and areas of northern Oregon will see lower amounts until Mid Saturday too early Sunday. You might be able to score 2 powder days in the Northwest starting north and working south by Sunday. Bottom Line: Good chase option, cold temps, good timing overnight into Saturday. Caveat: Warm temps initially with very cold temps with the bulk of the snowfall might be a bit crusty underneath. It might ride bottomless in some spots, and be pure punch through powder to the hard surface below.

The Sierra “you heard me” will likely see 4-8 inches between Monday and Tuesday. Snow develops Monday late AM and continues into the evening. While not a big storm anything will help. The Sierra is sitting at just 39% of normal as of today (Snow water equivalent).

Below: Season to date average Snow-Water sitting near normal for the PNW and much of the northern Rockies. Areas of Utah are only at 62% of normal with Wyoming not in much better shape. California is at measly 39%. Colorado is doing better however some storms have impacted the Front Range or areas away from the ski areas. The next storm next week might push some of these numbers up a bit. 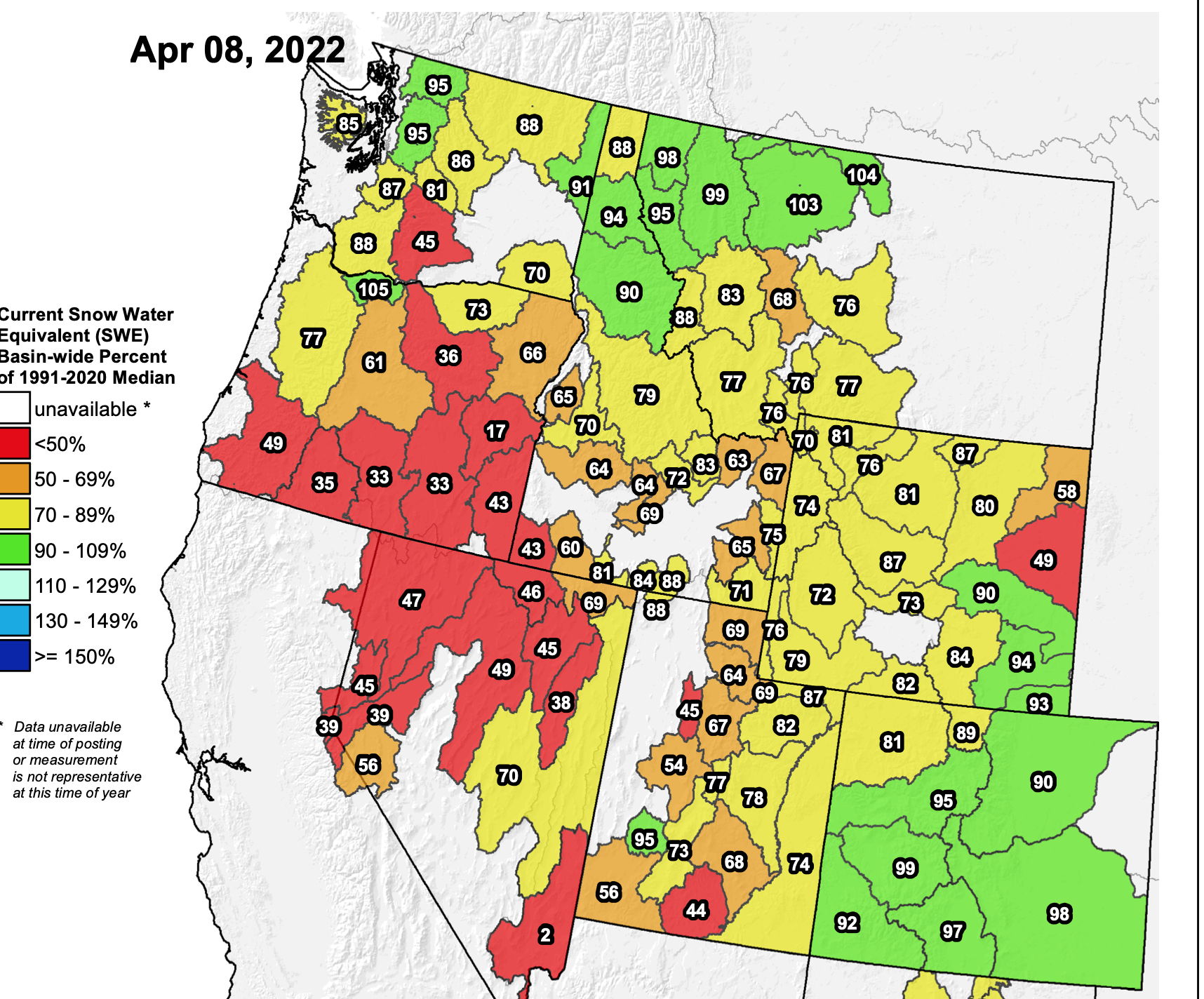 Below: The Sierra finally gets teased again with some snow Monday to Tuesday with a moderate storm.

Strong low pressure is noted on the models for the extended period impacting the Rockies in the Monday-Wednesday timeframe. There is a weak system over Colorado on Sunday. The models are showing 2 scenarios for next week with a cutoff low (Hard to nail down exact track). The European takes low pressure south over New Mexico which is the most bullish as moisture will flow north of the center of the low. This could bring decent amounts into Utah (double digits) by Tuesday and even higher amounts to Colorado (Tuesday and Wednesday). In fact, if this solution pans out the Front Range including Summit County could be measuring feet of snow even at lower elevations. The American Model pushes the low further north into Wyoming bringing higher amounts to the Tetons (Monday-Tuesday) and a bit less snow for Utah and Colorado. Central Idaho will likely also score decent snowfall from this storm.

Bottom Line: High confidence for a significant storm for the Rockies next week. Low confidence on track or intensity. Currently the focus of attention appears to be Utah, Wyoming, and Colorado. Central Idaho is also in scoring position.

Below: European Solution brings the low pressure system south over the 4 corners pushing ample moisture north into Utah and Colorado. This would be the deeper solution for many areas. 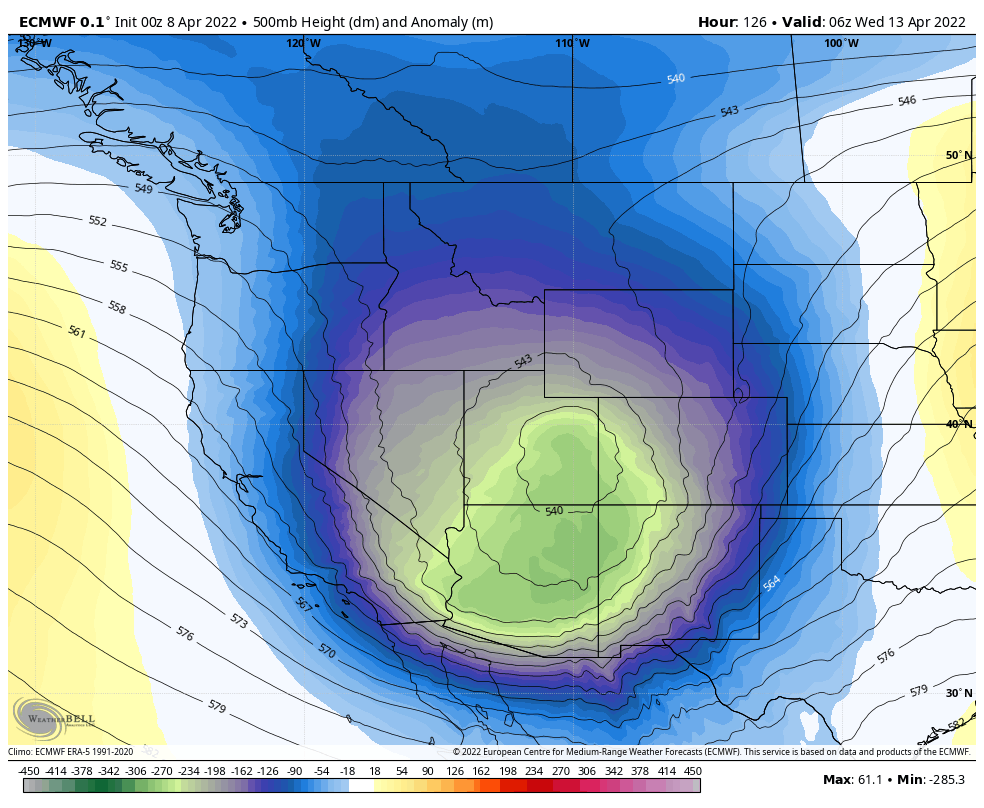 Below: American GFS pushes the low much further north over Wyoming resulting in a bit less snow for Utah and Colorado with perhaps more for the Tetons next week. 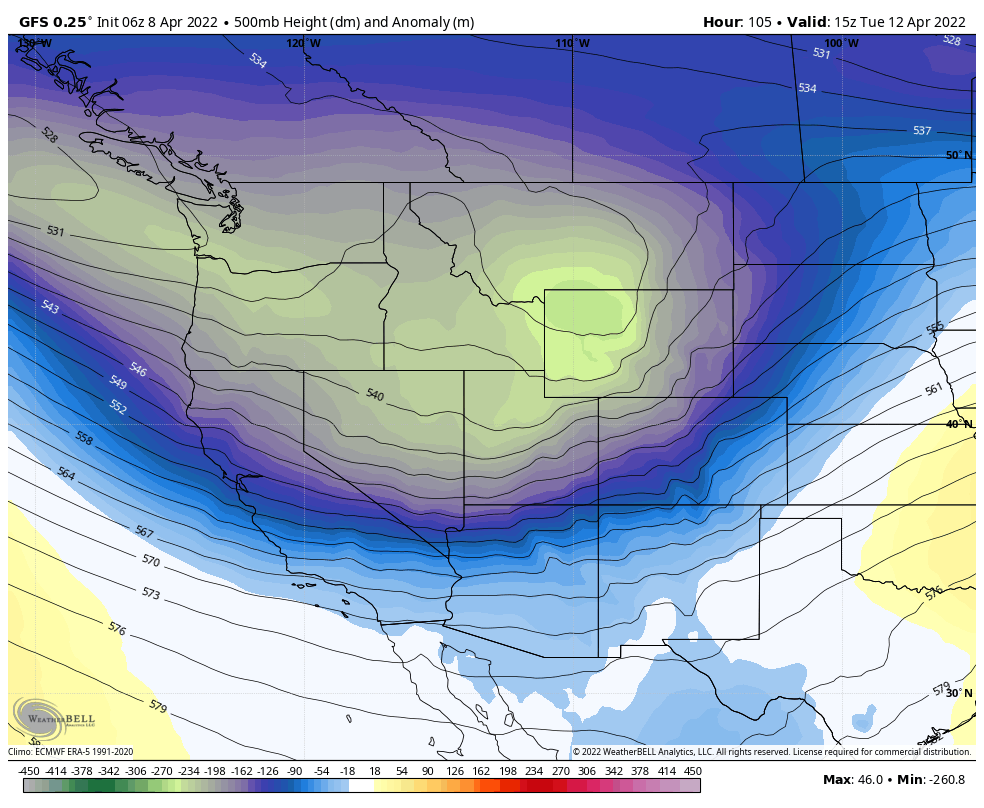 Below: Total snowfall per the GFS solution through Wednesday morning for the west. Remember, the European solution is showing showing much higher amounts for Colorado and perhaps Utah. There is decent flux in the exact track of the cutoff low. Many areas will still see snowfall regardless. 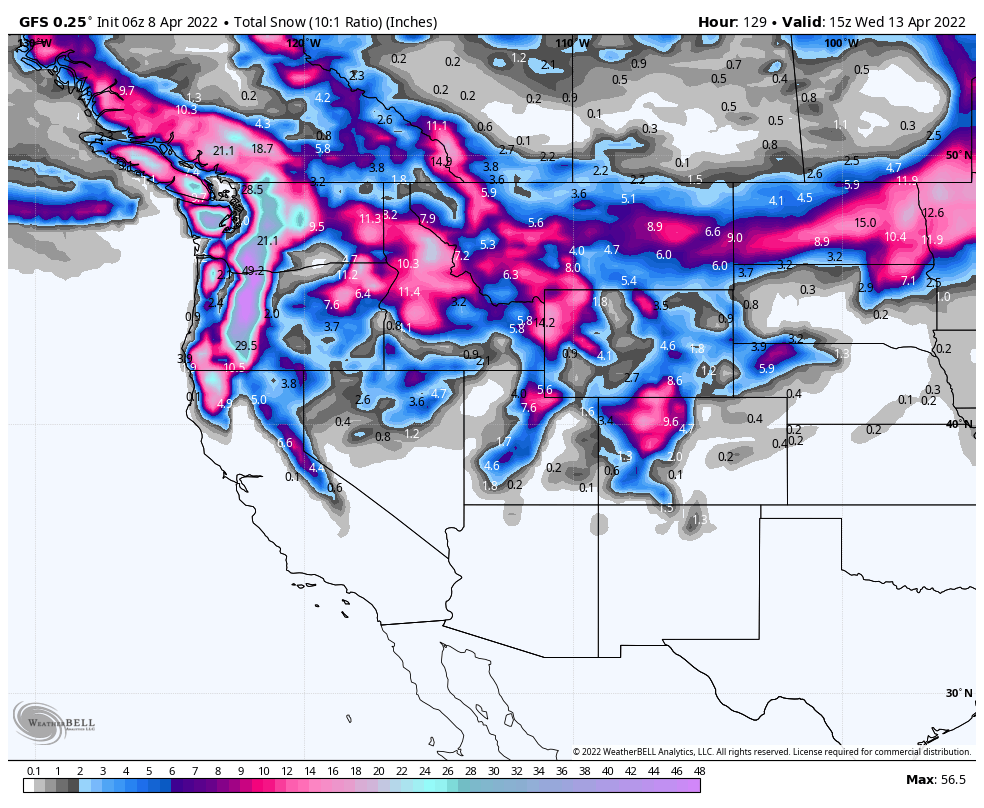 AK is having an EPIC season. Alaska Backcountry Guides still has some seats available beginning April 10th. You get a free concierge package for next season from Powderchasers! Check these guys out! How's This For A Ski Party Trick?