POWDER CONTINUES FOR THE WEST WITH MORE CHASES POSSIBLE FRIDAY AND THE WEEKEND.

The past 48 hours delivered significant snowfall to many areas highlighted in our last forecast. I chased to Grand Targhee Tuesday morning as snow was falling heavily in the Tetons all day. I arrived at 2 PM and scored up to 15 inches of dry powder for the remainder of the day (Epic storm skiing). Teton Pass and JHMR were all very deep with an additional 5-7 inches between 3 PM and 6 PM (Both Wednesday and Thursday) with storm totals around 21 inches in the Tetons. The decision to chase was based on only a few models that showed these heavy bands and more importantly watching the radar which showed moisture hung over the Tetons for my entire drive in my TDI VW grabbing 48 MPG (Salt Lake to Driggs Idaho).

From there, the chase went back to Utah where the Cottonwoods scored up to 21 inches for Wednesday morning. Most of the Utah ranges scored deep numbers with 9-16 inches as of early Wednesday and snow continuing for much of the day.

In Colorado, the ultimate winner was Steamboat as forecasted with 10 inches Wednesday morning and a whomping 24-inch storm total (summit) as of Thursday morning (Over exceeded expectations) Snow fell at a moderate clip Wednesday night for fresh powder for the I-70 corridor (Vail cam is at 6-9 since closing) extending south to Telluride. These bands are focused on the San Juan Range and moving into New Mexico Thursday morning.

Chasing powder on Thursday will find new terrain openings at many ski areas in Utah and the new powder that fell in Colorado Wednesday evening.

Below: Decent amounts of snow for northern New Mexico. Many ski areas from Angel Fire, Taos, and even Ski Santa Fe will see snow from this event. 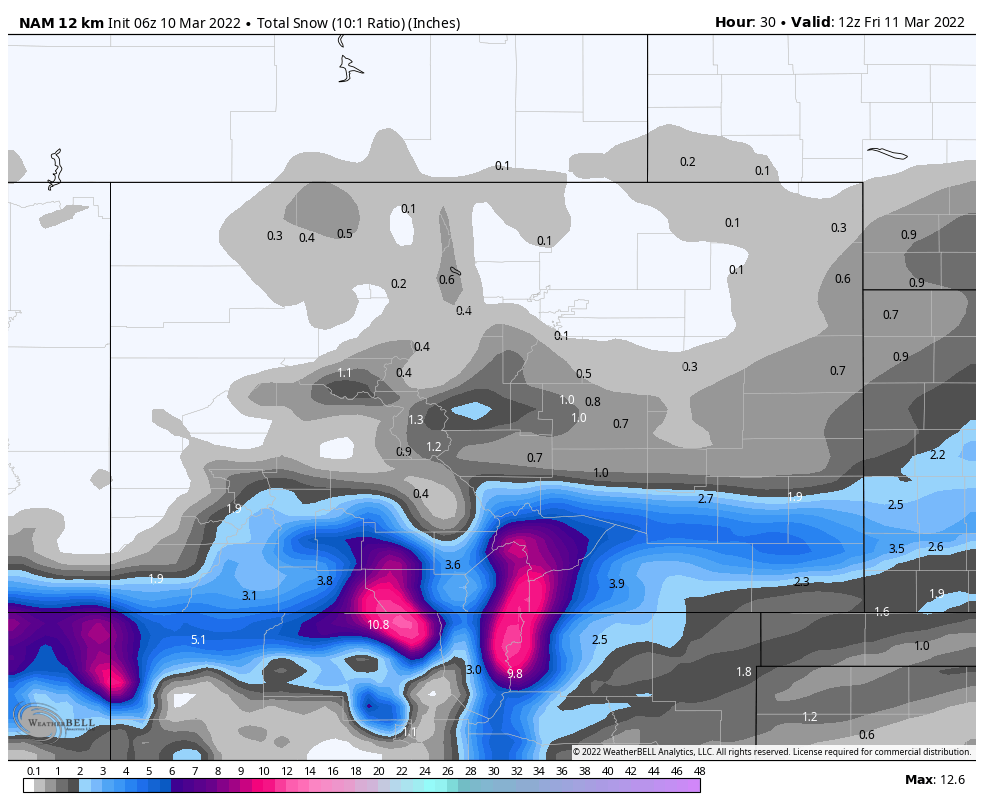 The weekend brings a storm into the PNW with slightly warmer temps that will reach the Rockies by Monday.

In looking for powder eyes are focussed on the Cascades for Saturday/Sunday. Warmer air moves in Saturday followed by a cooling trend for Sunday. SW winds will favor Mt Baker Saturday so the last chair might offer decent amounts. Winds veer S SW Saturday night (Strong winds noted in the southern Cascades) and eventually NW with some cooler air (3K snow levels) for Sunday. Models have been flip-flopping from a deep storm for Stevens Pass or Crystal to a more moderate event. Mt. Baker will continue to see snowfall.  Heavy snow will be falling in Oregon Sunday however temps are warmer and quality may be lacking. Wind direction this weekend could bring some surprises to White Pass or Crystal. Whistler will grab a foot of freshies Saturday into Sunday with slightly cooler temps. Bottom Line: Decent snow totals, warming initially followed by cooling (Could be a bit dense). Look for Mt Baker as a winner but areas south are solid contenders near Crystal or White Pass. Temps and wind might not be ideal. Canada might be a better choice.

Below: Decent amounts in northern Washington and western Canada through Sunday afternoon. Decent amounts are possible for the southern Cascades of WA and northern Oregon primarily late Saturday and Sunday Slightly warmer temps were noted. 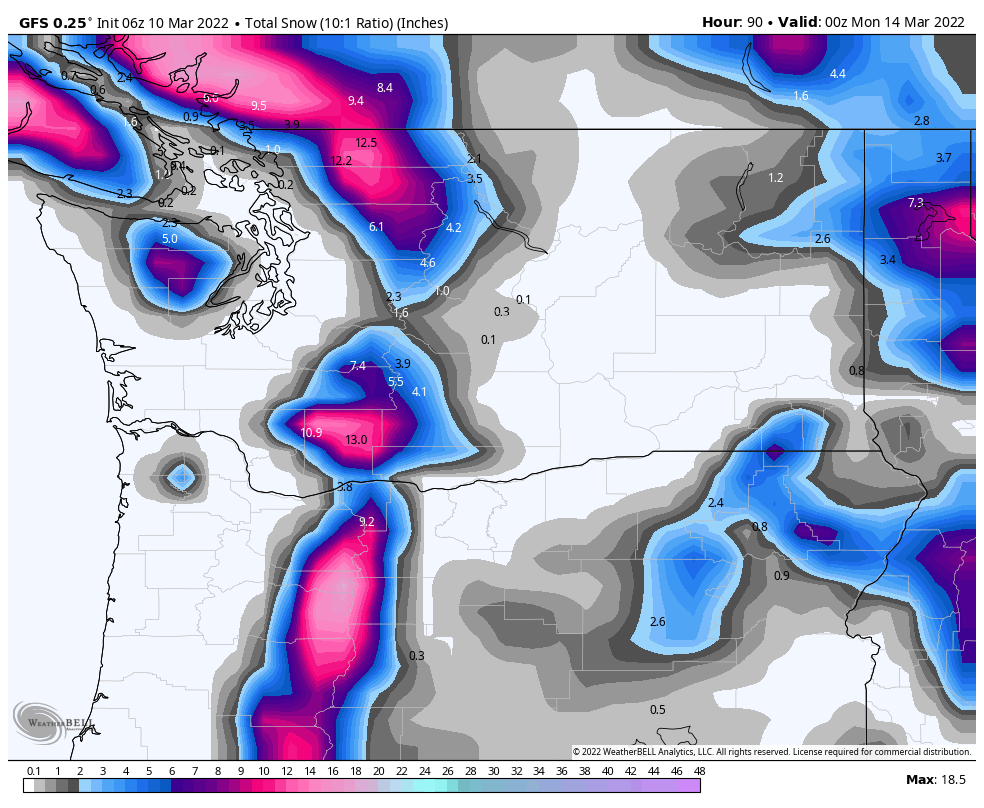 Snow drags over the Rockies favoring Northern Idaho, Northern Montana (Whitefish), and drops south over Central Idaho, Tetons and Wasatch by Monday. Temps are cold enough for mostly snow at the bases of ski areas however on the warm side. While northern resorts are favored in ID and MT, the Tetons should see moderate snow with the Wasatch a wildcard (Light to moderate event). Bottom Line: Several waves of light or moderate snow with higher amounts in the northern regions. Look for some moderate amounts at Schweitzer, Whitefish initially with snow spreading south into the Panhandle of Idaho and western Idaho on Tuesday. The Tetons grab moderate leftovers from these storms with the Wasatch a wildcard.

The pattern continues next week with moderate waves of snow entering the Northwest including BC and dropping south over the northern Rockies. There will be a refresh Wednesday and again on Friday with similar brief warm-ups followed by some cooling with each event. The late-week event might bring higher amounts for Colorado.