Powder Alert Across The West!🚨

Powder Alert Across The West!🚨

POWDER ALERT! SLOW CHUG OF MOISTURE FOR THE WEST BRINGS BACK DECENT TOTALS OVER THE NEXT 4 DAYS.

Several short waves will overspread the west in the next 4 days with many periods of light or moderate snow. The deepest amounts may end up in the 2-3 day totals versus any single double-digit event. There are some wildcards however for deeper snow on Sunday and Monday with colder temps. The extended forecast also looks good.

If you want to chase powder to the deepest spots sign up for our Concierge program. If you live vicariously or chase based on these forecasts please donate to support our free forecast.

Models have come into consistency for the Sierra showing a widespread event Friday night to Saturday. None agree on who sees the highest amounts (NAM, GFS, EURO) with a general average of 4-9 inches likely for Saturday morning. Some show deeper snow in northern California (Well north of I-80), while others drive higher amounts north of Lake Tahoe (Sugarbowl, Palisades) and further south towards Kirkwood or Mammoth.  The High-Resolution model on Friday morning shows an edge of higher moisture in the southern Sierra. Even Mt Baldy near LA will see some snowfall from this storm. Plan to ride Saturday morning and it’s likely some light snow will still be falling. Bottom Line: Moderate event. No full agreement on who nabs the highest amounts.

Below: The National Blended Model solutions show widespread 5-10 inches for much of the Sierra Range above 8,000 feet (Lower elevations will see less). The European Model and Canadian are bullish for 5-10 inches for many upper elevations while the short-term High-Resolution model seems to favor the southern Lake and Mammoth. The American GFS is less bullish with 3-8 inches. Plan on anywhere from 4-10 inches and be prepared to chase based on webcams and snow telemetry Saturday morning. Models have downtrended a bit from Thursday. This is a moderate storm. 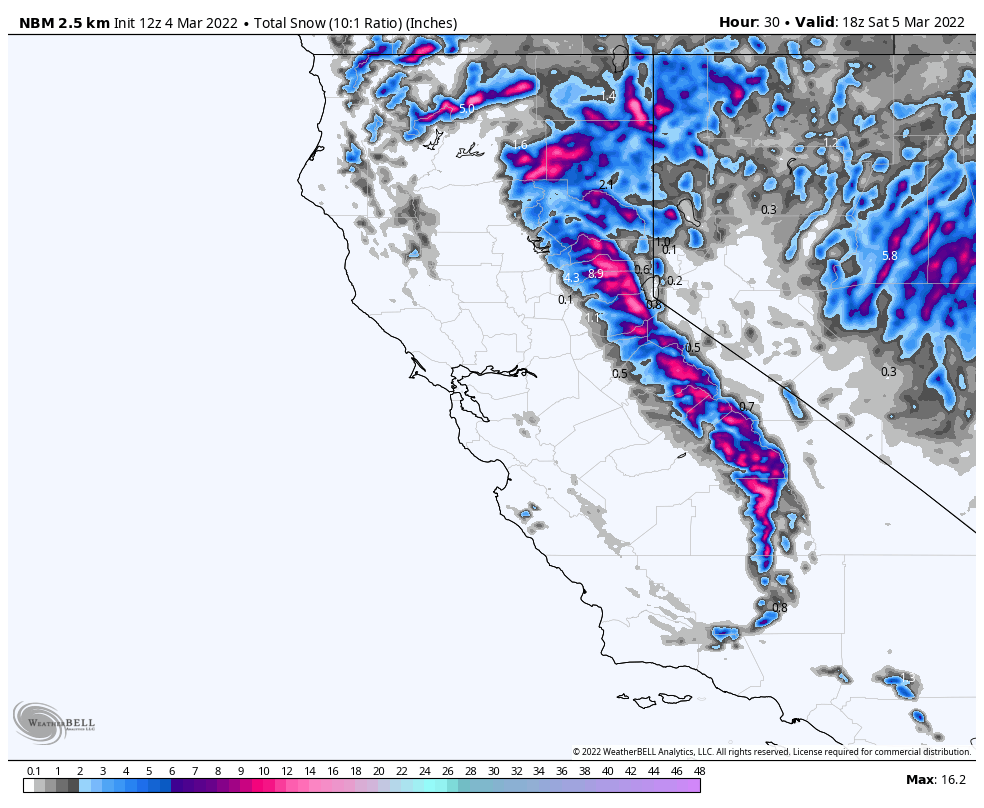 Elsewhere in the west, the main events will focus on Utah, Wyoming, Arizona, Colorado, and New Mexico.

Winds from the SW will push moisture into Utah and Colorado Saturday with warm temps and high snow levels (Elevation dependant rain below 7K). Amounts don’t appear significant, however, with higher elevations in Colorado, it is possible that Wolf Creek begins the day with 3-7 inches with additional amounts on Saturday. Similar amounts may fall north of Durango at Purgatory and Silverton with a bit less towards CB and Aspen. Models show scattered snow showers for the central mountains and some higher amounts developing north of I-70 for Rocky Mountain National Park and areas near the Wyoming border (Cheyenne). Winter Park is a wildcard. While winds are SW in the southern part of Colorado there is a NW component further north so areas north of Boulder or in Grand County or RMNP might see some surprising moderate snowfall bands into Saturday morning. Winds veer more NW later in the weekend pushing moderate snow into the I-70 corridor for Sunday and Monday. There is not much consistency in amounts but It is possible 5-10 additional inches fall during the Sunday/Monday timeframe over the core of I-70. This might favor the western resorts including Vail Pass. The southern mountains will continue to see snowfall through Sunday albeit lightening up a bit. Bottom Line: Decent chug of moisture, long-duration event, initially favors the San Juan Range, with the I-70 corridor doing best Sunday or Monday as winds veer N or NW. Some isolated higher amounts initially Saturday are noted in Northern Colorado near Wyoming, RNP, or perhaps WP as a wildcard. Some totals in Colorado will exceed 12-15 inches over the next 3 days. There might not be any single double-digit 12-hour event. Sum totals will be respectable.

For the Tetons look for light snow Friday night to Sunday with a few inches each day but unfortunately not any deep dumps. Heavier snow will fall east of the Tetons in the Wind River and Absorkas Ranges.

In Utah, models have been keeping us up all night, in complete flux pushing moisture south or east, and currently a stronger consensus of setting up along I-80 bringing light snow initially on Saturday turning heavier Saturday night and Sunday. Winds are from the S, or SW for much of this storm so areas in Big Cottonwood, or perhaps Park City or Deer Valley might do well especially on Saturday night as temps cool (Too warm initially with rain/snow). Areas north to Snowbasin or Beaver Mountain near Logan stand a chance also. Look for the Provo areas mountains like Sundance as a wildcard. Winds are counterclockwise at times SE that could spell surprises towards Beaver. Wind speeds are very light which will also limit the amount of snowfall due to poor orographic forcing. On Sunday winds shift to a more favorable direction of NW will colder air that will bring higher totals to little Cottonwood Canyon and even the Park City mountains (Canyons side). Snow will continue into Monday morning in areas favored by NW flow (Light or moderate).  Bottom Line: Starts out warm Saturday, finishes cold Sunday to Monday. Initially, winds are unfavorable for many areas. It’s likely some moderate snow late Saturday to Sunday, perhaps heavy at times bring 6-12 inches to many Ski areas in north/central Utah with the Cottonwoods standing a chance of 12-18 inches by Monday morning (Storm total). there are wildcard picks from Park City, Snowbasin, Beaver Mountain, and Sundance as model disagreement could land some nice totals here and a bit less for the Cottonwoods. Big Cottonwood may initially do better than LCC Saturday night until the winds shift to the NW Sunday mid-morning. Models are still not in agreement so these totals will need an update. See below maps.

Below: American GFS showing decent totals for much of the I-80 corridor and south to the Cottonwoods and Provo area mountains through Sunday morning. With colder temps and higher snow ratios, these totals could exceed 9-12 inches in the Cottonwoods (Total from Saturday to mid-Sunday). 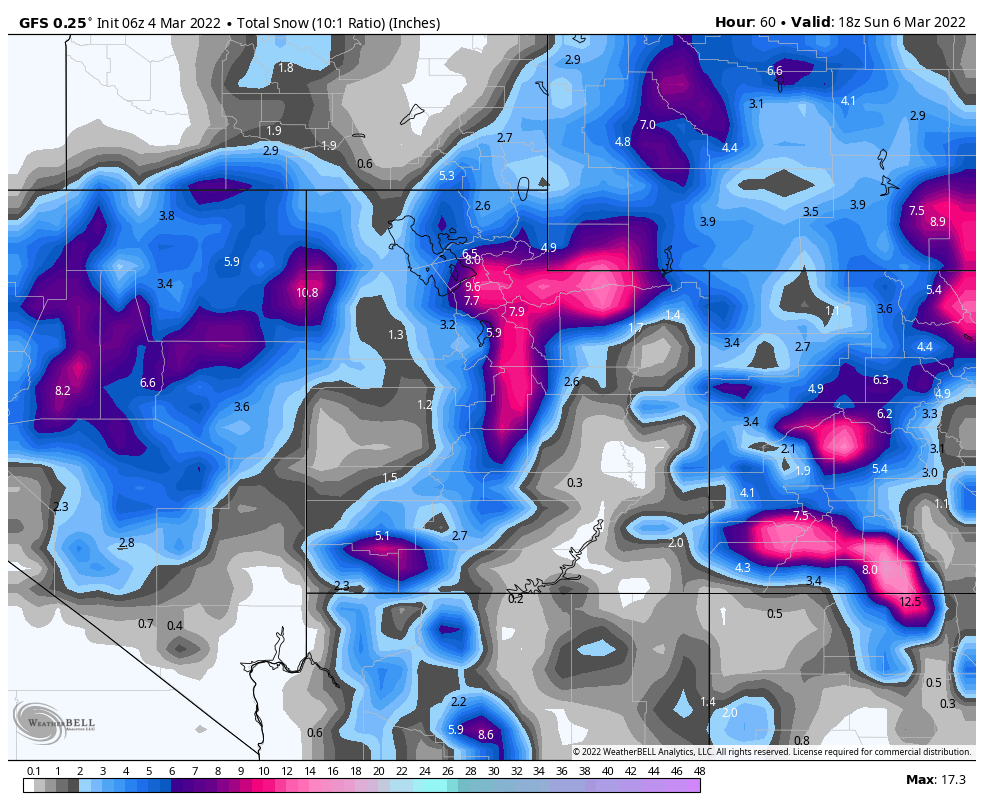 Below: 12 KM NAM showing higher totals for Beaver Mountain by Sunday morning along with the Uinta Range east of Park City. This would result in less snow for the areas along or south of I-80 but higher amounts further east towards Colorado. I have high confidence in the Uinta Range. 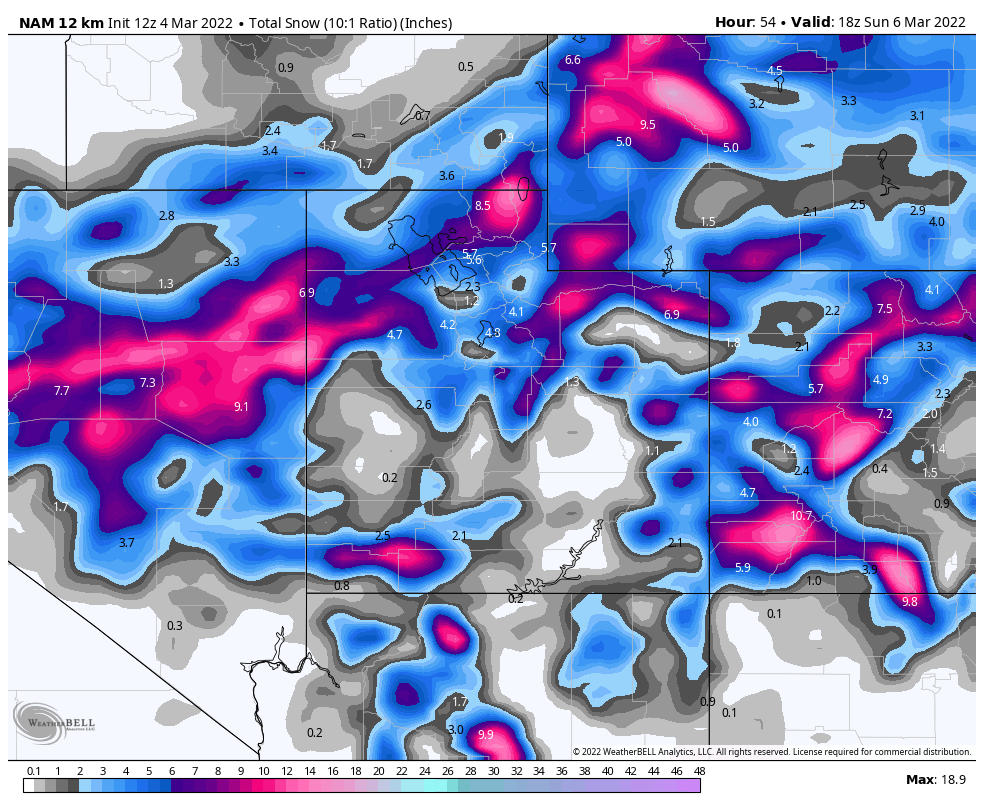 Below:  European Model also shows less snow for the Cottonwoods (6-11) with higher amounts for the Uinta range, Wasatch Back, and southeast Wyoming with a glimmer of hope for the Logan Area towards Beaver. 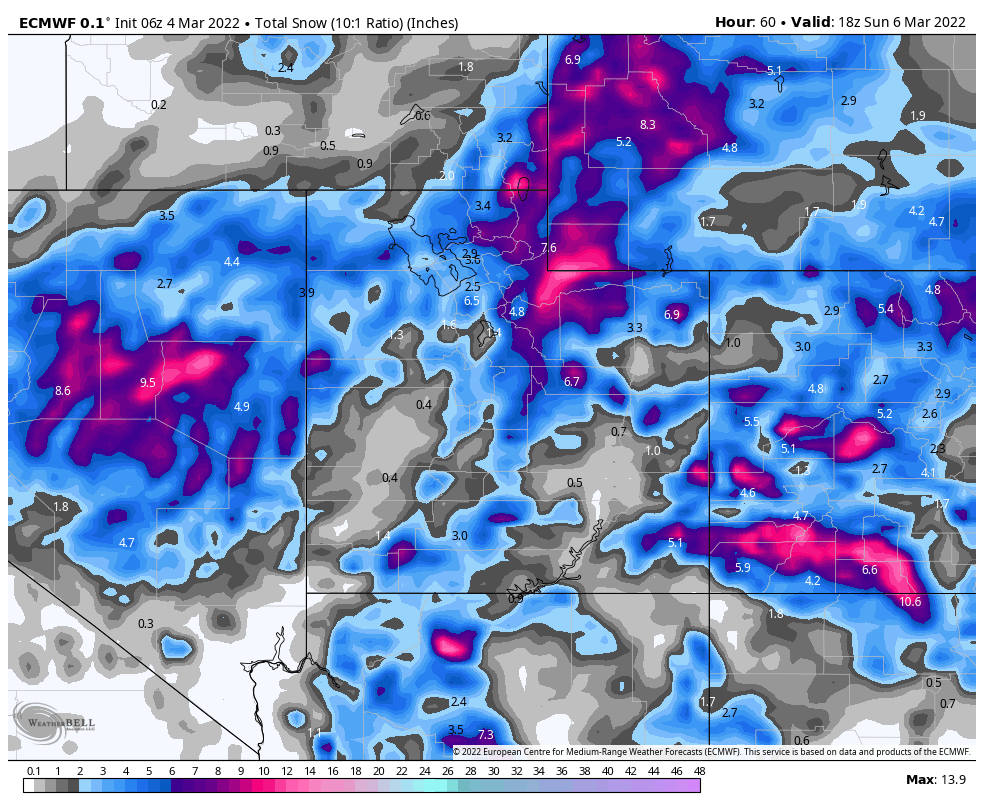 Finally, New Mexico will see snowfall with light or moderate bands this weekend and a chance of heavier snow for Monday lingering into Tuesday.  The extended looks good!

A strong cold front with good odds of a decent dump will overspread the southern regions of BC, Pacific Northwest, and eventually the Rockies mid-next week. This could spell for some good totals for many areas that will eventually reach Montana, the Tetons, Wasatch, and Colorado by Wednesday or Thursday.

See you on a first chair this weekend.