A very wet and rather warm atmospheric river has been impacting the PNW with heavy rain and high elevation snow. This combination has made for dangerous avalanche conditions that will likely persist this week. Overall, some decent snows have fallen in areas around Stevens Pass and northern Idaho but with warmer temperatures moving in, snow levels will rise a bit. 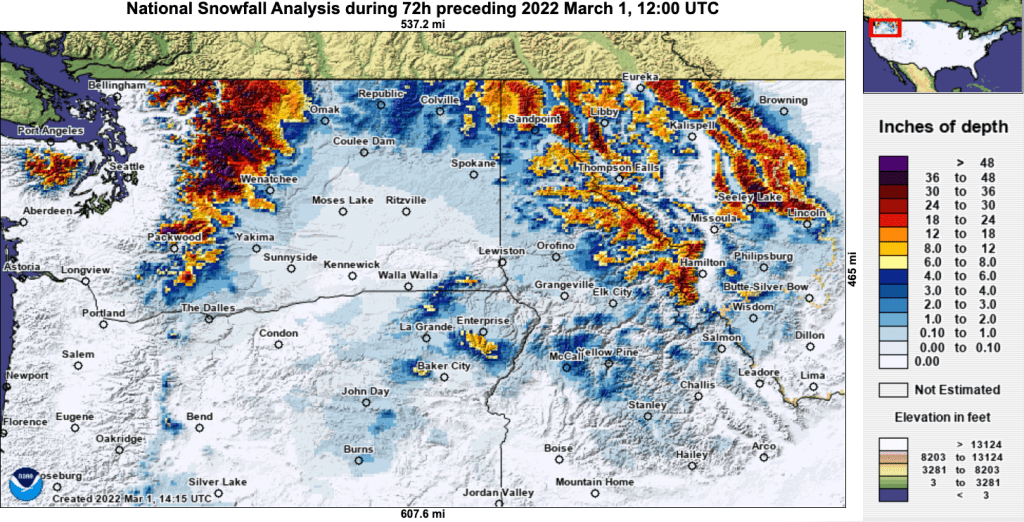 Snow over the last 3 days has been confined to the PNW (mainly Washington) and the northern Rockies but as we continue to look into the future for snow, our attention will shift a bit south. Selkirk Powder Guides, our Idaho sponsor did score some deep powder on Monday so be sure to check them out for backcountry adventure (Cat, Snowmobile and Heli). 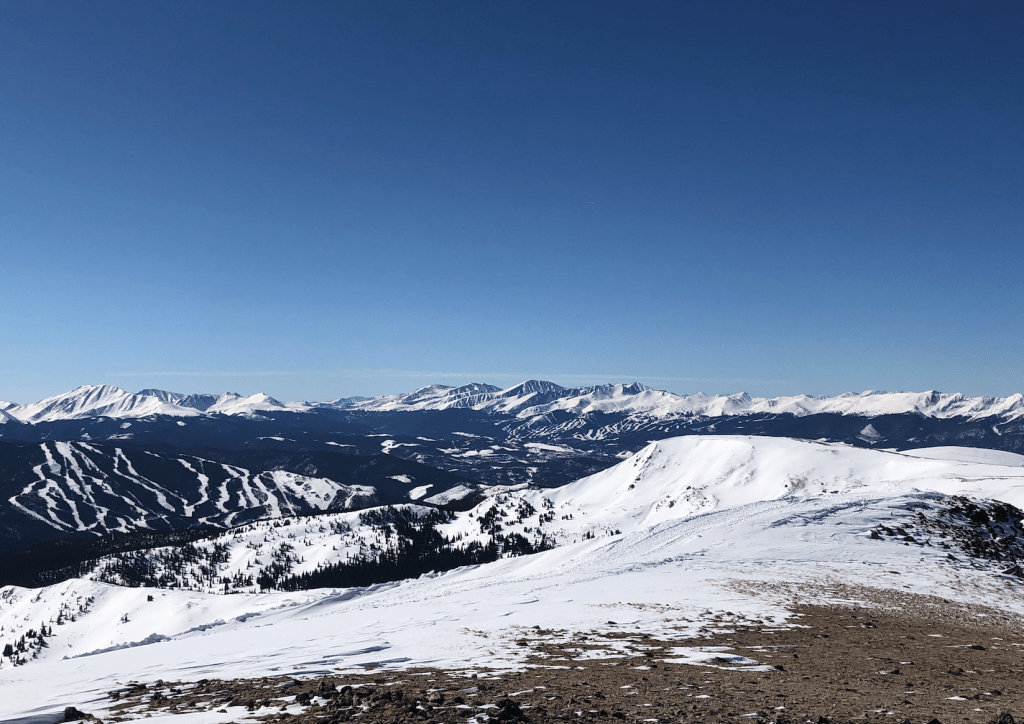 Above: Powder Chaser Andy skied Loveland on Monday with beautiful clear skies and a view of nearby Keystone and Breckenridge. Follow Andy on Instagram @RainorShineImAndyStein

Our ridge of high pressure that is keeping most places mild and dry will be replaced by a broad area of low pressure. The pattern that is setting up is reminiscent of the NYE storms with the possibility of daily snow lasting more than a week in some places. While this upcoming storm doesn’t have the umph that the NYE storm did, this is still likely to be a good pattern for snow.

High pressure will be replaced by low pressure starting Thursday for the west coast. A few bouts of energy looks to swing into California and the intermountain west between Thursday and next Monday bring a solid chance at fresh snow each day in between.

The pattern is a little unorganized so while snow is expected widespread across the mountainous west, there will be times of heavy snow depending on which mountains you plan to explore. Below you’ll find look at where some of the best POW could be found by early next week. 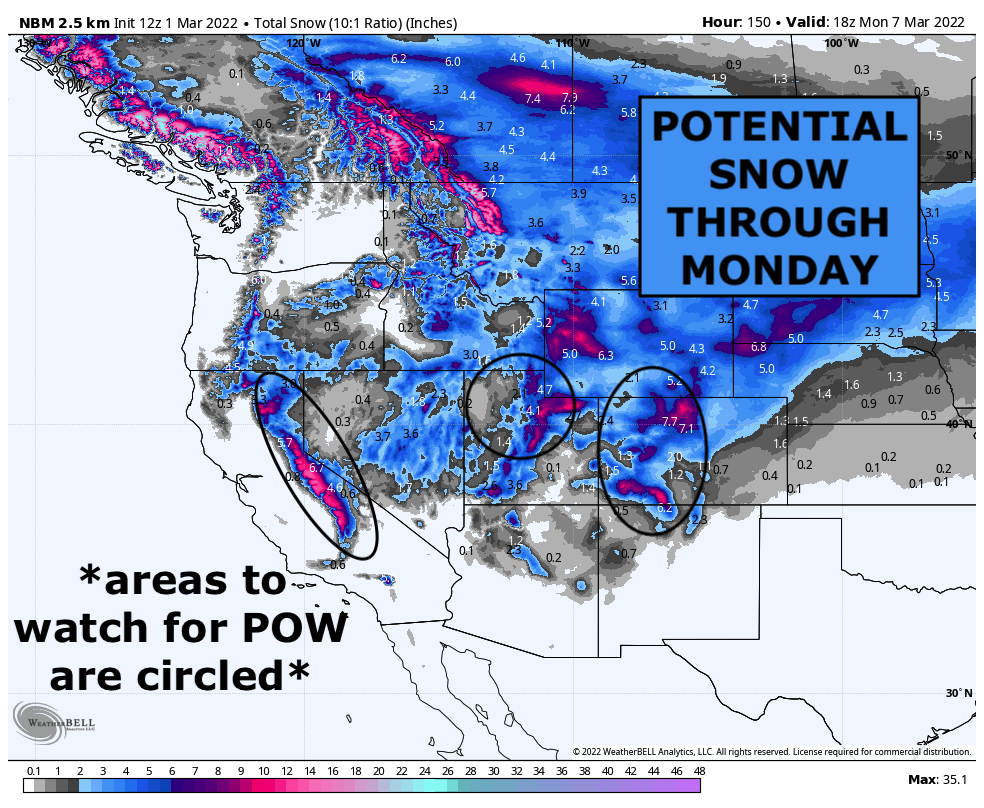 The snow showing up in the northern Rockies and through the Cascades in the image above will be from the atmospheric river event currently happening. There will be high snow levels with this storm so from Washington to Montana, snow levels are expected to be above 5-6,000′ which leaves mid-mountain and peak locations with some wet snow while base elevations get light rain or a mix of precip.

For California:
A decent storm looks to shape up between Friday and Saturday with snow falling heaviest in the Central and Southern Sierra. Areas around Tahoe and Mammoth may get 9-13 inches of snow during this time with the higher amounts on the peaks above 8,000 feet.

For Arizona: The Snowbowl could score decent powder from Saturday to Sunday with 6-12 inches likely (Storm ski Saturday and more snow for Sunday).

For Utah:
Snow will begin Friday night will light to moderate snow continuing through the weekend. There will be a more southerly storm impacting Utah initially with a secondary storm happening later in the weekend so wind direction will vary through this time. In total, 5-10″ of snow is expected widespread but the Uinta mountains may have a few totals around a foot possible. The Cottonwoods might also sneak up a 3 day total of 12-15 inches (Slow build up each day with Sunday or Monday being the coldest). Other areas slowly building to 5-10 with perhaps higher amounts for Deer Valley or Park City that can do well in S flow. The models show higher amounts east towards the Uinta range. Southern Utah should also do well with this storm.

For Colorado:
Similar to Utah, snow will start in SW Colorado Friday before expanding to all of the state by the weekend. Initial heavy snow will impact areas around Telluride and Wolf Creek by Saturday with light snow falling through the weekend. The Central and Northern mountains from Vail to Steamboat will be favored from Saturday to Monday. 5-10″ of snow is likely in Colorado by the end of the weekend into early next week.

Looking further out, the pattern looks to stay cool and wet through the 14th of March. 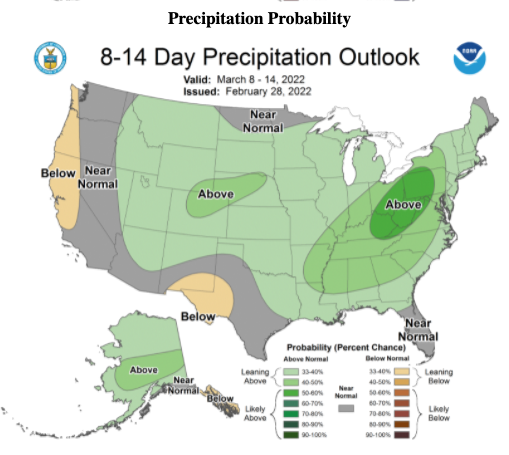 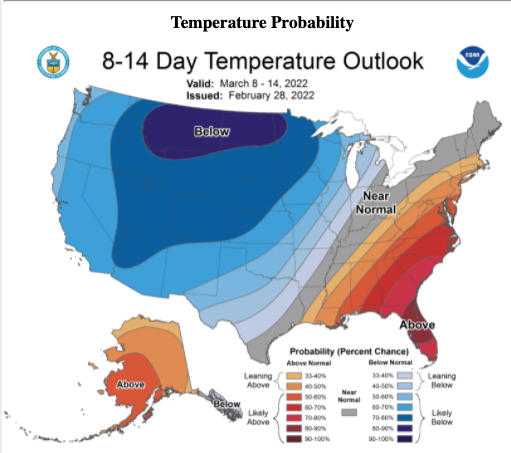 Much of the western US will have cool temperatures for the first half of March and many locations will see wetter than normal conditions as well. The only exception to that rule looks to be the west coast mountains of the Sierra.

A sneak peak at snow totals into mid-March show that influx of snow for many areas.

I’m not highlighting any areas here because this long-range forecast is likely to change but what the image above shows is that widespread snow could fall in the Cascades and Rockies next week with California being less active. I would bet the Rockies will have some amazing powder to be found for much of next week.

Enjoy the snowy forecast! Spring snows are usually very helpful with snowpack across the west so seeing this forecast is good. Especially if we want to ski deeper into Spring.