A low pressure trough will approach the Pacific Northwest by Monday spreading south and eventually east over the Rockies. Generally light to moderate amounts are expected with some higher totals for Oregon and possibly Colorado. Another system is likely in week #2.

Announcement: There are still a few seats left in March at our trusted outfit Alaska Backcountry Guides in Valdez if you are interested in powder skiing. Mention Powderchasers for a free Concierge membership. They are getting significant amounts of snow currently. We sent several clients to them last season with great feedback.

If you want to chase powder and end up at the deepest resort on nearly every storm join our Powder Concierge program for very detailed forecasts or simply donate to support our free forecasts.

The past 2 days has had some surprise snow totals. Red Lodge Mountain (MT, WY border) scored 18 inches in 24 hours Friday. This mountain is favored with NE winds (Upslope) and benefited from very cold temps that produced nearly 30:1 snow ratios (30 inches to 1 inch of water). The amount of water they picked up was only around .05/inch so to see such large snow totals is certainly impressive. It had the perfect ingredients for a great storm. For the few skiers that were there I am sure it was epic.

Meanwhile on the Front Range of Colorado the storm over performed a bit on the eastern side of the Divide (6-10 inches, WP- Eldora), and came in as expected further west (1-3 inches). I chased to Eldora on Saturday morning and was met with smooth light density powder (6-8 with deeper pockets), that filled the face with every turn (Light density face shots). It felt great to be able to hit my local mountain splitting my time between Boulder and Park City. Reports from Winter Park were decent also from my friend Tanya who lives there. 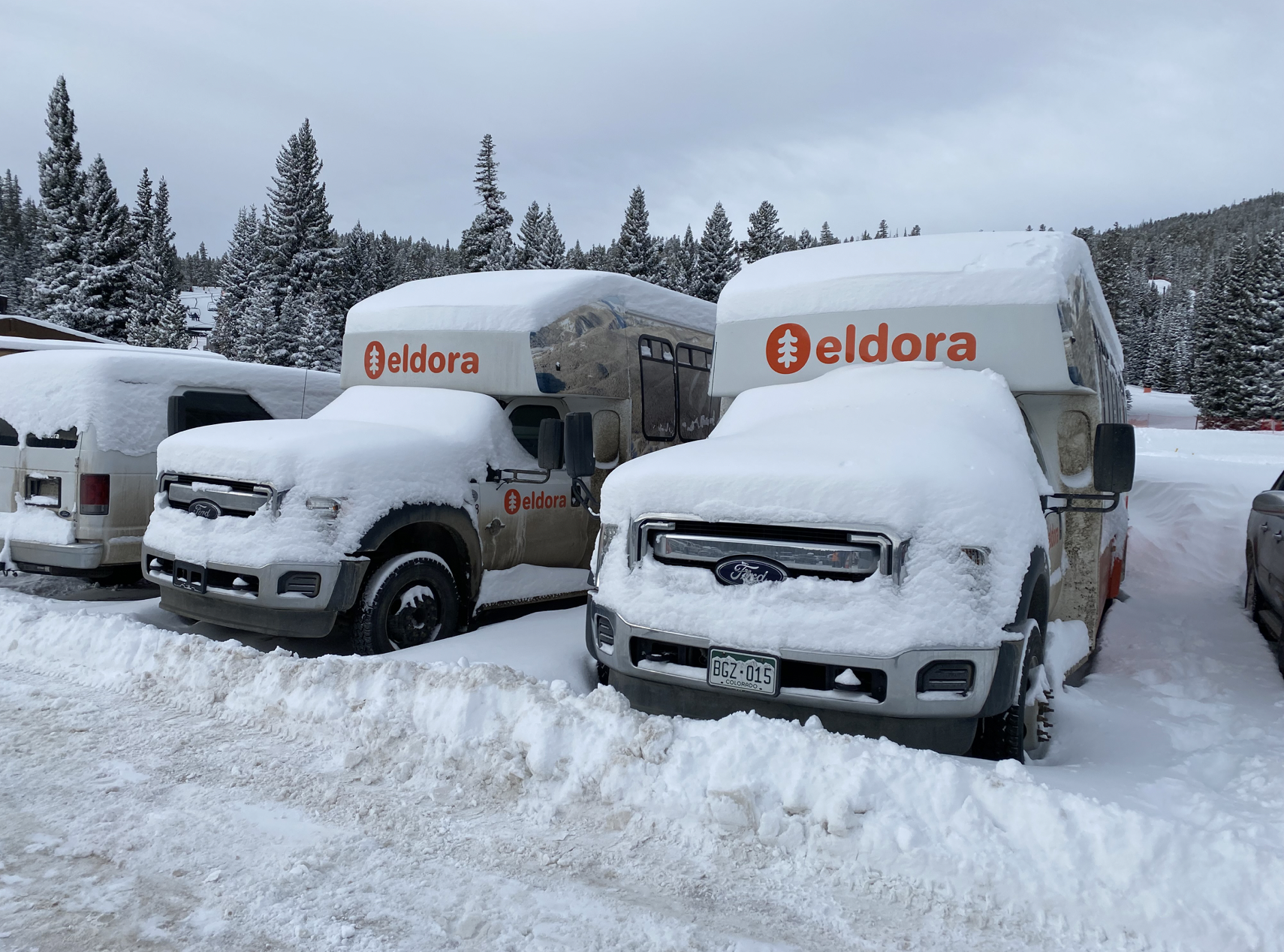 In the short term forecast, a low pressure system will begin to impact the Oregon Cascades by late Monday and spread light or moderate snow over the Washington border into the southern regions (White Pass), with less further north. Oregon resorts in the northern and central Cascade Ranges seem favored for 6-9 inches of snow by Tuesday. This will be the first decent event they have seen for a while so I have no idea how it will ski below the new snow as temps have been warm. Some locations could exceed 9 inches at the summits by Tuesday.

This system will push snowfall east into the Rockies in the Tuesday-Thursday timeframe. Another storm is due in week #2 so keep reading.

Snow from the southern Cascade Ranges moves pushes moisture into the Rockies Tuesday-Thursday. The models are in a bit of flux with who sees the highest totals. Averaging out the model runs with the National Blended Solution it appears that moderate snowfall is likely over E Central Idaho that should bring 3-6 inches to many resorts from Brundage and east on Tuesday (Higher totals may land just east of the Ski area) towards the MT border.

Montana resorts will also benefit from moderate snow including the Snowbowl outside of Missoula where 4-7 inches are likely by Wednesday morning. Snow will also be falling further east towards Sealy Lake and wildcards of Teton Pass Ski Area or Great Divide but amounts will stay on the light or moderate side. Ride Tuesday and again Wednesday for some freshening pow. You can check out all the Montana resorts and bases here.

Eventually the action moves south over the Tetons, Wasatch and remainder of the Rockies. The models don’t agree with totals for the Tetons or southern Montana. It’s likely the Tetons and areas north to Big Sky and Bridger grab 3-5 inches from Tuesday to Wednesday. N, NW wind direction, colder temps may enhance totals especially over southern Montana by Wednesday (Bridger may sneak out higher amounts). Some models show decent totals for the Tetons (Tuesday-Wednesday) while others much less. Bottom Line: Light to moderate snow for most of Montana with some outliers grabbing 4-9 inches by Wednesday (Wildcards). The Tetons will likely see light snow with an outside chance of moderate amounts (Tuesday and Wednesday). Storm appears to be broken into 2 waves versus a single event.

In the Wasatch look for snow to begin by late morning Tuesday and continue into Wednesday morning. Amounts seem to be in the 3-6 inch range with a few models trending a bit less (Canadian and American). Aim to ride late Tuesday or early Wednesday for some light freshening.

Below: Total snowfall for the west through Thursday. Oregon, certain isolated areas of Montana, Idaho and Southern Colorado are favored for the highest snow totals. 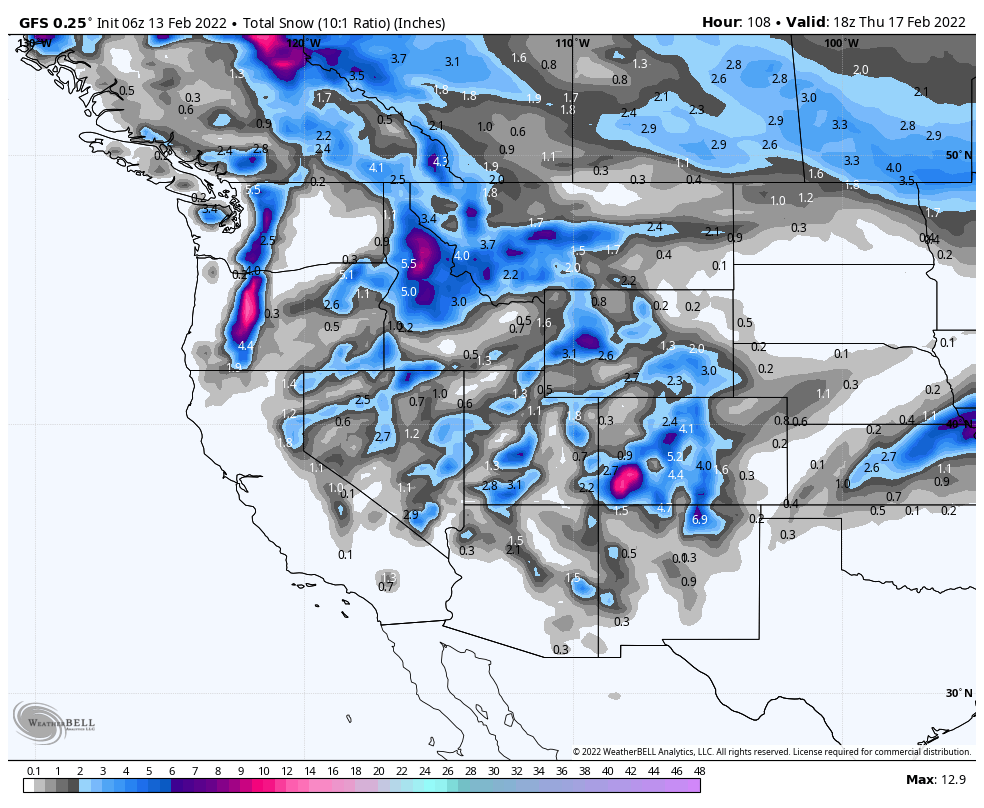 Below: Low pressure in the 4 corners pushing moisture north over the Rockies midweek. 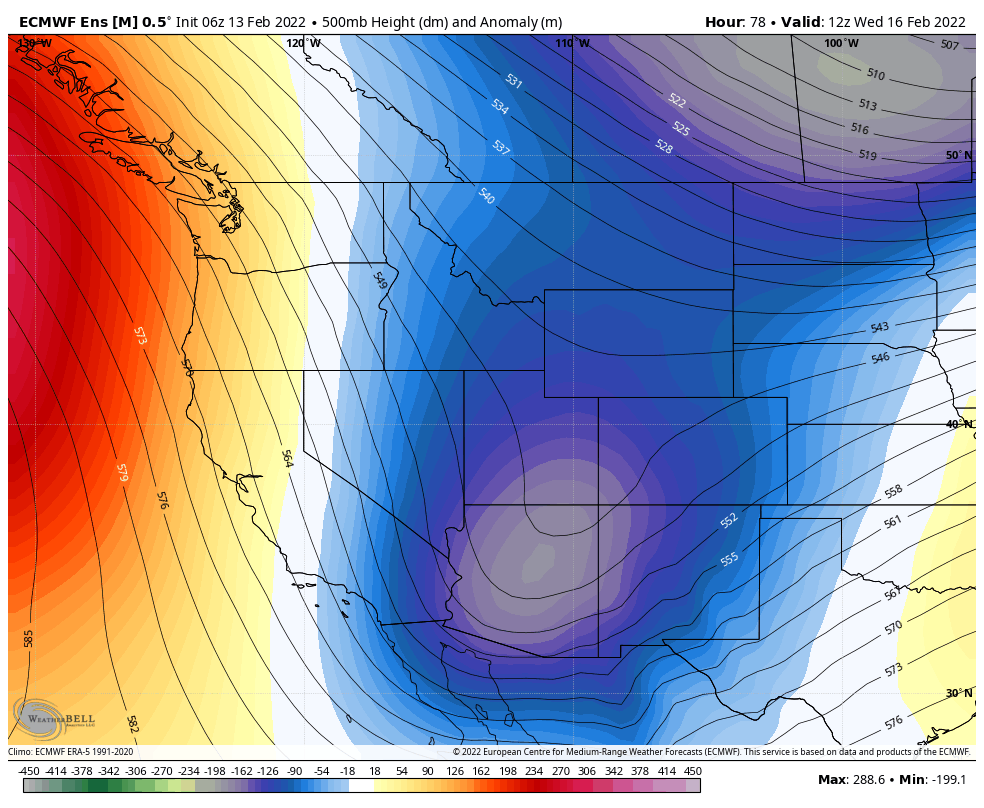 Eventually Colorado and New Mexico get into the chase with snow developing primarily Wednesday morning for Colorado continuing into Thursday. The models are confident for a widespread event for Colorado as the low pressure trough pushes south to the 4 corners and swings inland over the Colorado mountains. The highest energy is likely to occur over the San Juan Ranges where 5-10 inches are possible in some resorts. SW winds initially will favor the San Juans with winds shifting to the N, NW and NE during the storm cycle. Energy directly over the State (Counterclockwise winds) will allow nearly all resorts to grab some much needed powder Wednesday/Thursday. Generally, this storm should bring 4-8 inches to most mountains by Thursday morning with higher amounts possible in isolated areas of the San Juan Range. Eventually the action swings into New Mexico late Wednesday night into Thursday with Taos a strong contender for decent totals. Bottom Line: Decent event for much of Colorado. Energy is directly overhead bringing snow for many locations regardless of wind direction and orographic benefits. Some isolated areas of the southern mountains may end up with 10 or more inches. Models are not 100% in synch yet.

Below: Total snowfall for Colorado and New Mexico using a blended model solution through mid Thursday. Colder air pushes in Late Wednesday night with ratios increasing and higher amounts possible than indicated. Widespread event for most ski areas! Currently I am going with 4-8 most locations and higher amounts in the San Juan Range. 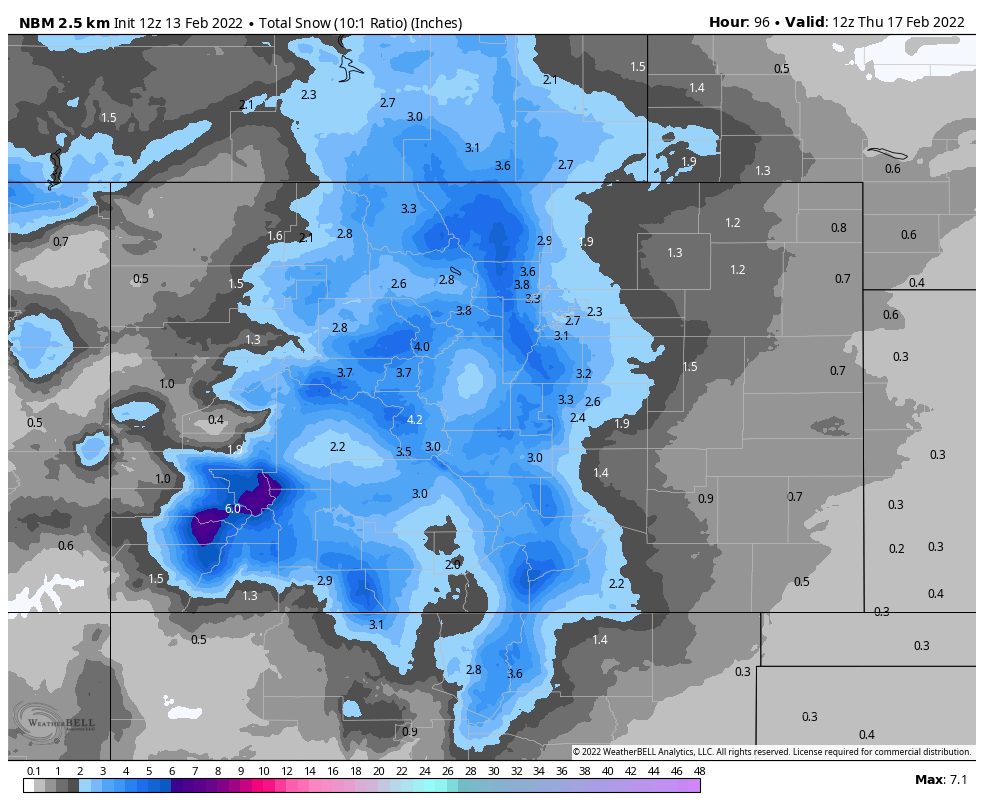 Looking further afield, there is another low pressure trough on the ensembles that is likely to take a similar path as what we are seeing this week. Look for more snow to begin around February 21st which might be a stronger system and bring snow back to the Sierra and even Arizona as it pushes a bit further south.

Below: Low pressure is noted returning to the west around February 21 which might push further south into the Sierra and the 4 corners with some decent totals possible. It’s too far out for confidence at this point. 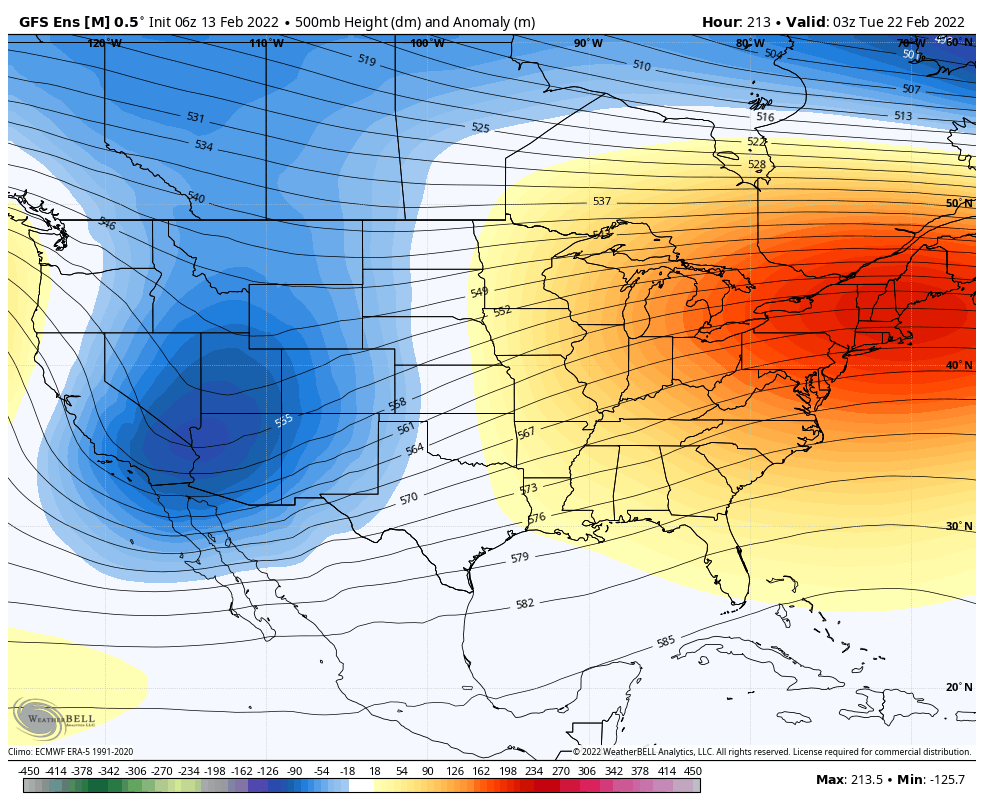 There is finally something to talk about. Please follow my travels on Instagram @powderchasersteve for the latest in travel and photography including pow.