SUMMARY: The previous 3 days have been nothing but chaotic with several feet of snow for the west but unfortunately, warm air won the battle in many areas. Yet, the northern and interior Cascades and parts of Colorado are scoring. The week ahead looks dry for the Rockies after a moderate storm Friday/Saturday. Canada might reap some rewards mid-next week.

Forecast and chase update: Our chase has come to an end after 10 days of nonstop double digits from the Wasatch, Sierra, PNW, and Tetons. I almost chased to Northern Idaho this morning but the temps are just a tad on the warm side (Powder Pickiness). Schweitzer is reporting 11 inches overnight. The last several days define “the deepest snow is not always the best chase” with the western Cascades on virtual lockdown with warming temps, 1-3 feet of snow, and many areas not opening on Thursday (PNW). In fact, I don’t believe a single mountain pass in Washington State was open on Thursday. Mission Ridge in interior Washington scored 2 feet of dense snow (Great to fill in the base). Snoqualmie, Stevens Pass, and the road to Crystal were all closed. They are expected to open today.

The Tetons went from superhero blower on Wednesday to deep upside-down snow on Thursday. All upper lifts closed by 11 AM Thursday with increasing avalanche danger.

Below: @powderchasersteve via Instagram in the Tetons midweek (Deep Blower). Photo: @lstone84 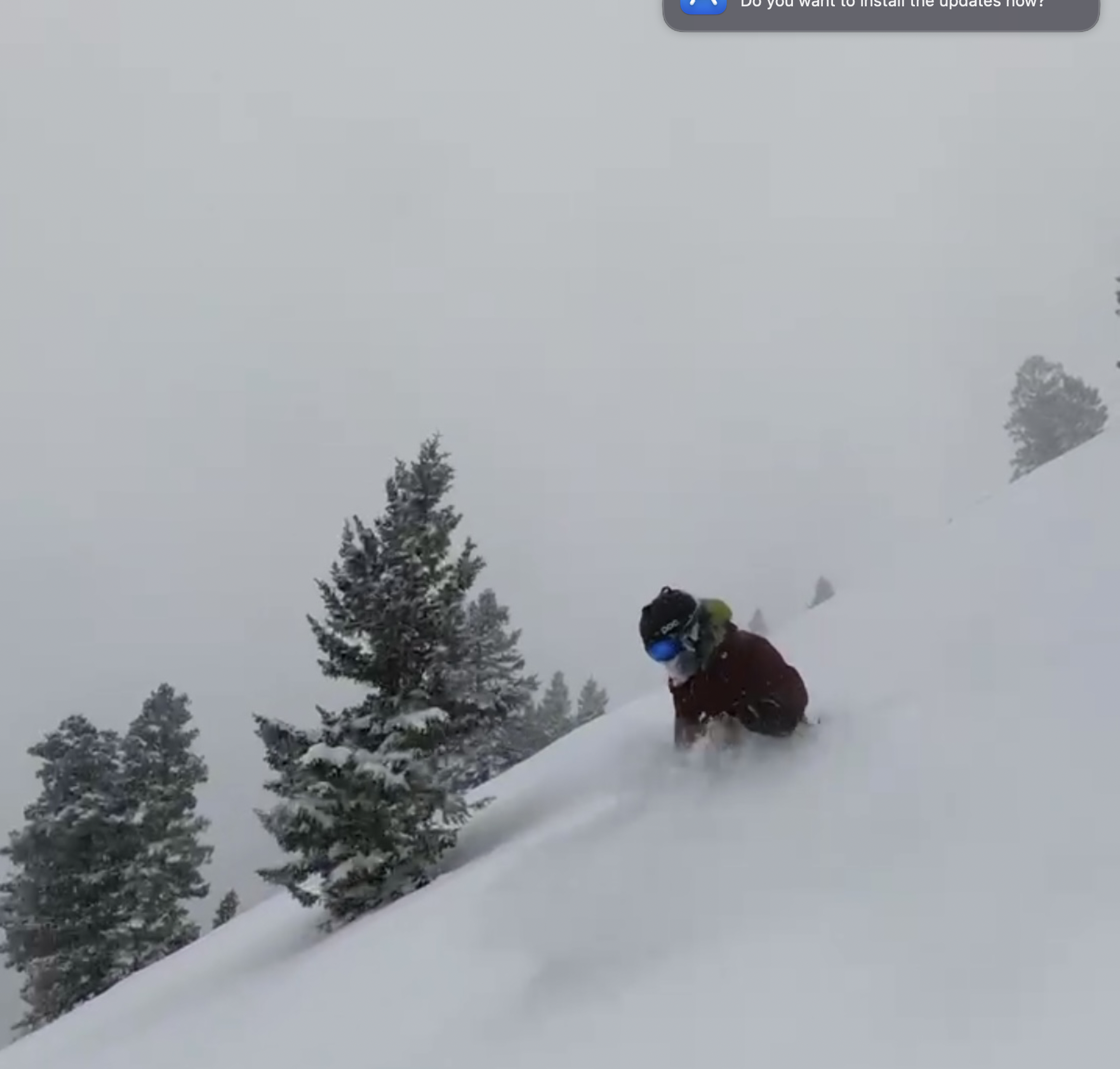 This is likely one of those days to stay out of the Backcountry in the Tetons with significant snowfall and upside-down conditions (Rated high by the Bridger Teton Avalanche Center Friday morning).

Total snowfall in the Tetons has been 30-40 inches in the past 72 hours! Additional dense snow fell Thursday night into Friday. Snow mixed with rain, grapple, and freezing rain on Thursday at the bases. The upper mountain might ski pretty well (medium-density pow) with the lower elevations deep cream.

Colorado scored slightly cooler temps (Elevation bonus) with up to 22 inches at Steamboat and nearly 15 inches along the I-70 corridor favoring the Divide and slightly west (Copper, WP, Loveland). Skiing in Colorado was likely pretty good on Thursday and additional trails will open on Friday.

In Idaho Tamarack scored 18 inches in the past 48 hours with Brundage seeing slightly less. Montana Snowbowl is 100% open but only saw 8 inches. Selkirk Powder Guides will be deep in Northern Idaho!

The models finally show colder air pushing out this pesky warm front late Friday to Saturday over the PNW and Rockies. Snow will continue to fall in the Cascades Friday with a general trend for better quality. 5-10 inches of additional snowfall for the PNW and Northern Idaho with increasing quality by late Friday. The short-term high-resolution models show a good push of moisture into eastern Idaho (Panhandle) with moderate amounts further south towards McCall. Montana will also grab moderate snow especially near Whitefish and the Montana Snowbowl. If we were chasing powder today, focus on Northern Idaho.

Below: Cooler temps return to the West by late Friday night into Saturday (4800 feet in C) with a cold front focussed on the PNW and Northern Rockies 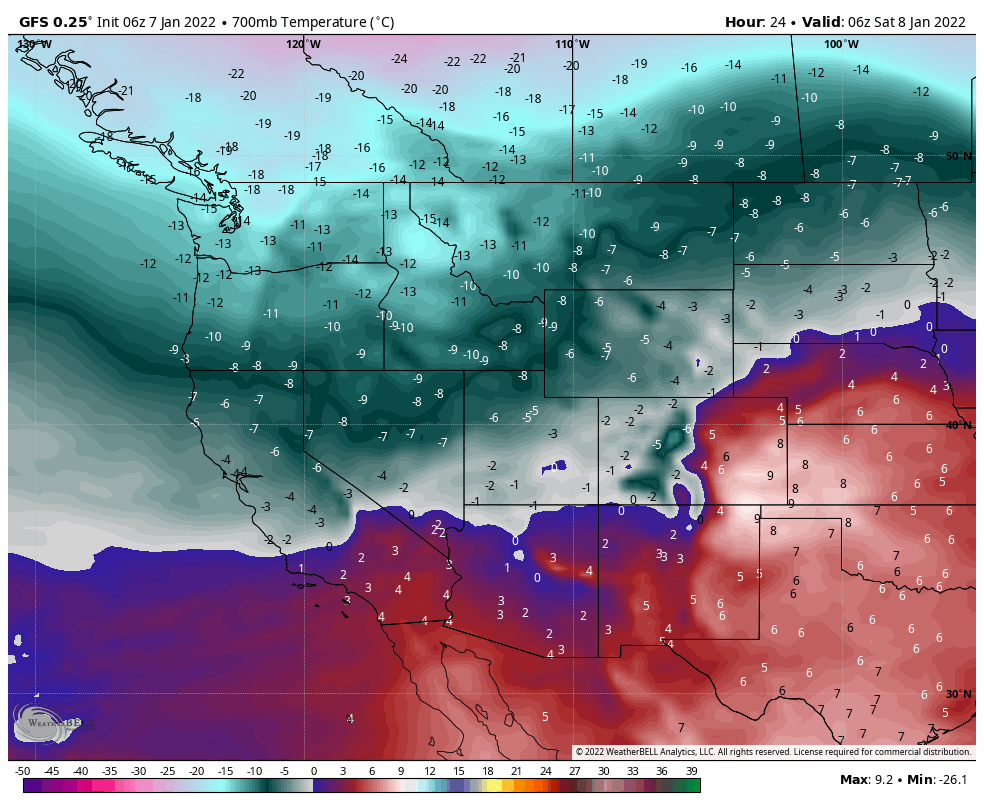 For the Rockies colder temps move over the Tetons and Wasatch late Friday with moderate snow for Targhee and JHMR (3-6 inches for Saturday morning) and similar or lower amounts for the central Wasatch. Bottom Line: Decent quality returns to the Rockies, with a fresh teasing of light or moderate snow. some of this snow will move over northern Colorado Friday night into Saturday.

The extended forecast shows a trend for warming and high pressure for much of the western US for most of next week. There is a storm noted on models for the mid-next week (Wednesday-Thursday ) timeframe, January 13 for Canada that should provide Whistler some moderate snowfall extending into the interior regions of BC albeit lighter amounts. Warmer temps will accompany this storm so upper elevations may be your best bets. Some of this snow might trickle into Northern Washington.

Below: Snow noted for Canada by mid-next week January 15th. Western sections will see the highest amounts followed by moderate snow for the interior near Revelstoke, Kicking Horse, etc. Temps are warming so the quality might be best at upper elevations. 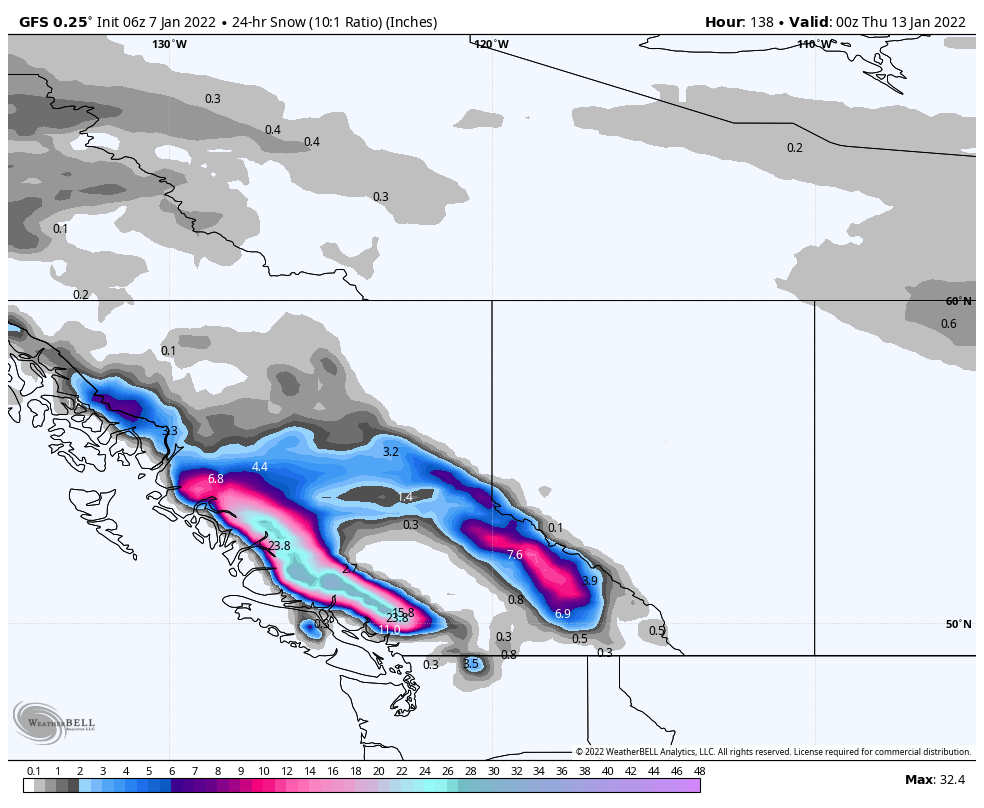 High pressure dominates most of the west next week. Some moisture from the southern Baja might try and slip east and north over the southern tier States (Possibly the 4 corners) towards the end of next week (January 15). It’s a weak signal currently and may slip south over central AZ or New Mexico. Otherwise, high pressure will dominate most of the PNW and Rockies with the exception of perhaps northern Washington mid-next week, and most of Western BC who will see some snow by Wednesday with a warming trend. 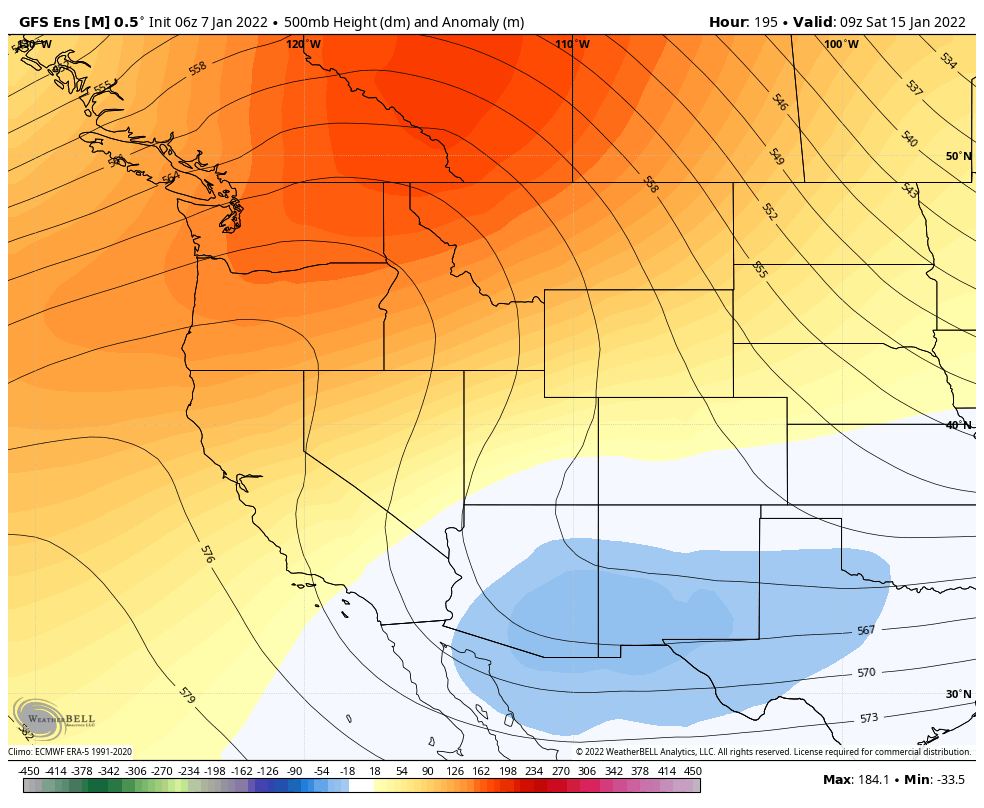 Enjoy the powder! Stay safe! Backcountry conditions are dangerous in many areas! You can follow my adventure at @powderchasersteve on Instagram.

Announcement:  If you want to Heli-Ski in Alaska we have partnered with Alaska Backcountry Guides who still has a few weeks left in March and April. They are a great service with fantastic feedback from clients that have used them. Any bookings with ABG will provide you with a free powder concierge package from Powderchasers good for this or next season! Our Concierge package provides you custom powder trip planning designed to get you to the deepest and best snow!