Summary:  It’s still dumping over northern Oregon, and the central Panhandle of Idaho where some resorts are reporting double digits Sunday morning. More snow for early next week for OR/WA with a warm front and then the firehouse opens up late for the Sierra mid to late week. If you want to score the deepest snow and resorts, and chase as we do, join the concierge for your custom access to our forecasters (Custom planning and detailed forecasts minute by minute). Also if you want to Heli Ski in Alaska this season there are still a few open slots in March at our partner Heli Operations Alaska Backcountry Guides. If you book with them, we are giving away a free concierge membership. Dates open are 3/6-3/12 and 3/20-3/26 and in April 4/24-4/30.

The past 48 hours brought significant snowfall to Whistler with 18 inches and new terrain openings expected today. Washington looked great on totals, but chasing powder even for 1-2 foot storm totals came to a halt as warm air moved in Saturday creating and upside down layer of “Funk” on temps that spiked from 16 degrees at Stevens to 32 degrees in just 2 hours.  That’s a very impressive rise in temps and I believe it kept lots of terrain closed due to avalanche conditions. I would have liked to have been at Whistler where temps remained cooler.

Temps in the Cascades plunged again Saturday night with most resorts on telemetry grabbing 3-7 inches of colder pow for Sunday (Might ski oddly with the warm layers below). Watching a powerful storm and making the decision “not to chase” is never an easy thing. Deepest spots will be found in central and northern Washington,Northern Idaho and western Canada from the past 24 hours.

Whistler:  18 inches- clearing- Will be epic

Below: Here is why we respect Ski Patrol and closures! These slides were patrol initiated at Snowbird on Saturday doing mitigation on the mid cirque traverse. You can see patrol to the right of the slide path. Another patrol cut track is seen headed into the fracture point (There were no injuries reported). 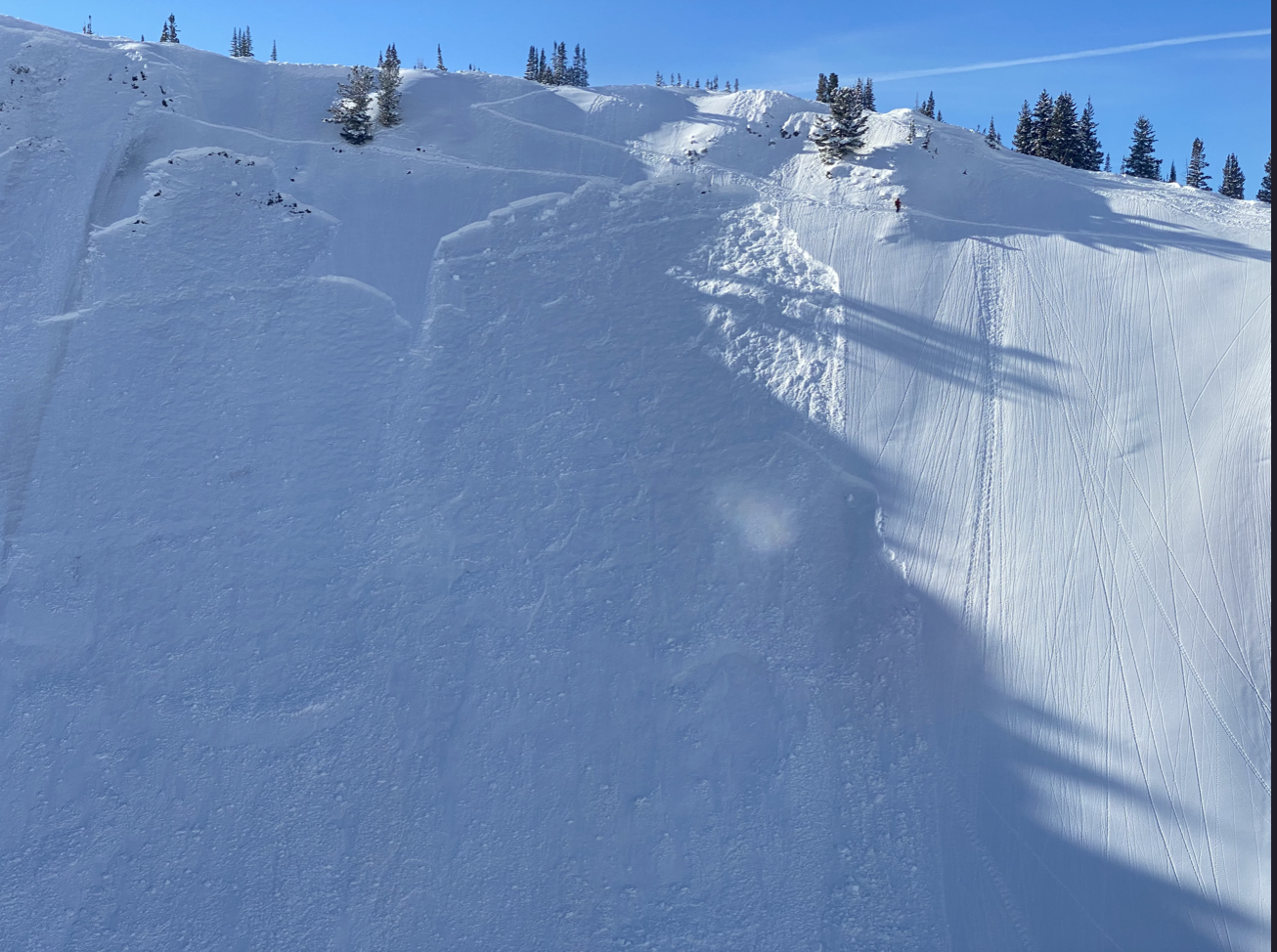 Snow continues on Sunday favoring the south/central Panhandle of Idaho near Lookout Pass and extending into Montana near the Missoula Mountains. Snow may be heavy at times especially in Idaho (5-10 additional). Snow will filter southwest towards central Idaho with a wildcard near Tamarack or McCall (Thin band of heavy snowfall might set up just north of the Ski areas). I would chase to the Panhandle for Sunday while it is still dumping.

An interesting set up is happening in Oregon where snow will continue today for the northern mountains and then push north with a warm front into Monday for Washington. It’s rare to see snow develop south and push due north. Southerly winds will favor White Pass, Crystal Mountain, and may even approach Stevens Pass for Monday/Tuesday. Unfortunately temps will rise once again so it may start out relatively light and fluffy but end on the denser side by late Monday or early Tuesday. These are wildcard chases.

Below: Warm Front returns to OR/WA Monday morning and pushes temps up for the southern regions of the Cascade ranges (Temps are at 4800 feet in C). The snow levels might start out decent for southern Washington (3K) and rise somewhat into Tuesday. Generally rising to above 4K in Oregon by Tuesday and around 3500 towards Crystal or areas north. Bottom Line: Might be a bit upside down (Starts out cold and finishes warm) so be aware of increasing Avalanche danger and funk in the snow. Oregon resorts will see the highest totals in the double digits. 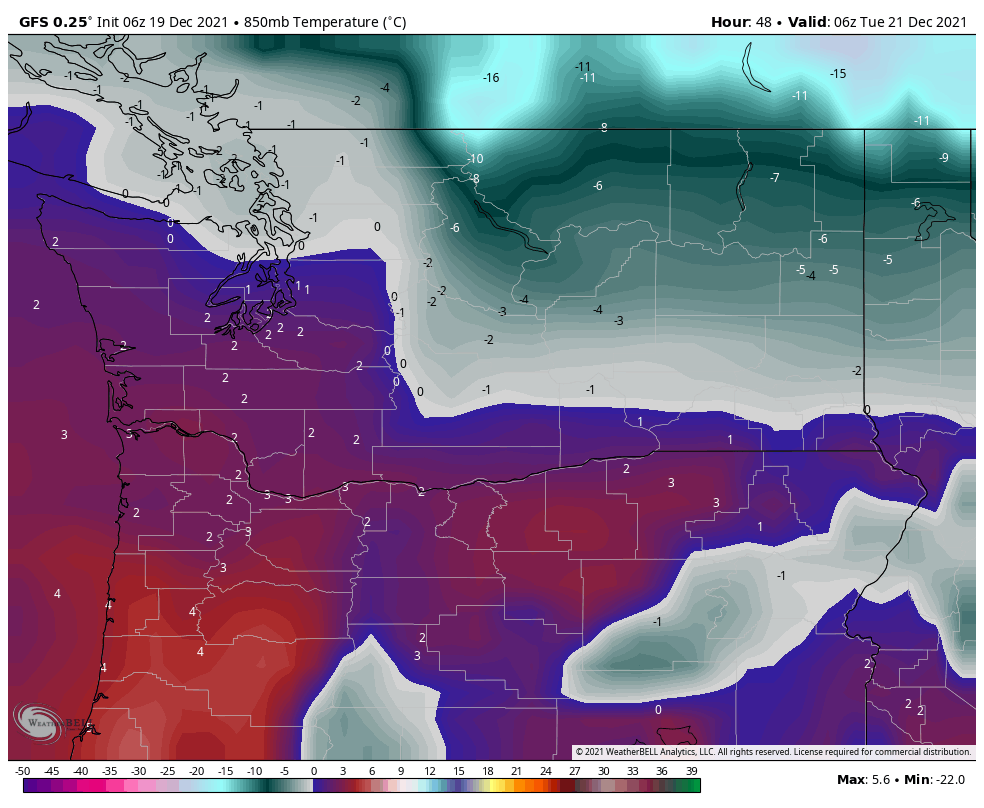 Below: Some heavy snowfall is possible at mid and upper elevations of northern Oregon and south/central Washington from late Sunday through late Monday with the warm front. Northern Oregon could score well into the double digits Sunday night to Monday (Mount Hood, Timberline Meadows). Snow will also be falling (Moderate) near Mt Bachelor and top out further north to Stevens Pass in Washington (Lower amounts). 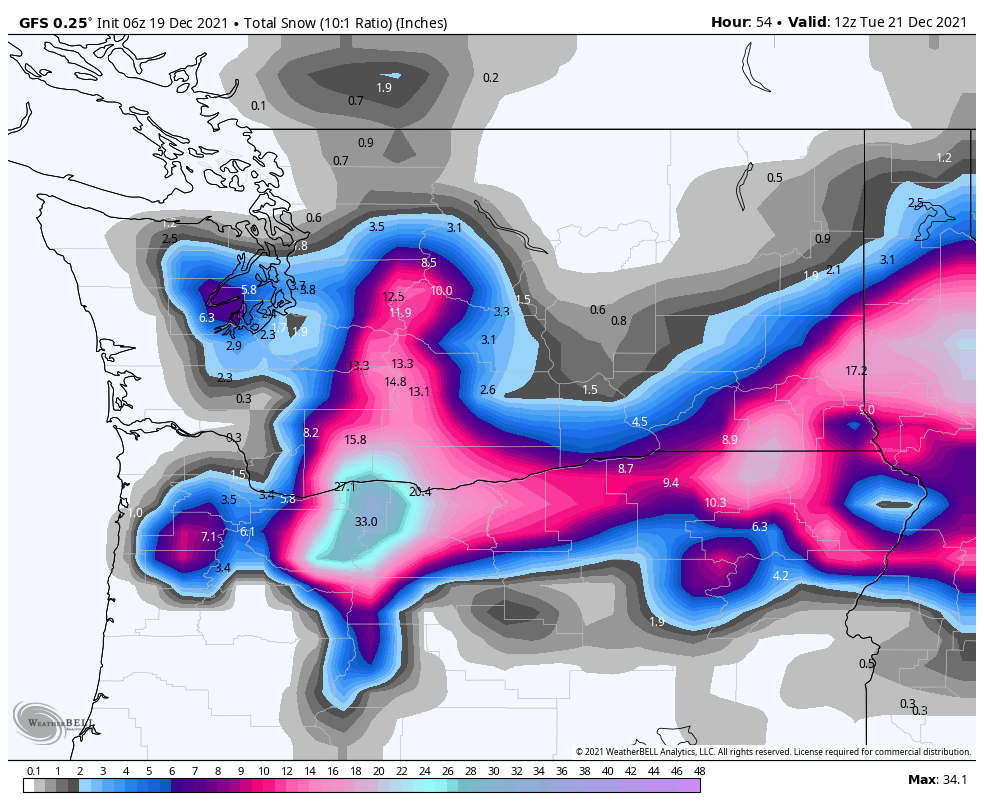 The extended forecast brings in deep snow for the west and east so keep reading.

Eyes are on a low pressure system approaching the Pacific for the middle of next week. A strong system may also move in for New England late week.

Below: Low pressure approaching the west coast Wednesday December 22nd. Light to moderate snow is likely over many areas of the PNW, Northern Idaho, BC, and the Sierra. Steadier snow and perhaps heavier amounts may fall late Wednesday into Friday as the system moves inland over the Rockies (Thursday/Friday). 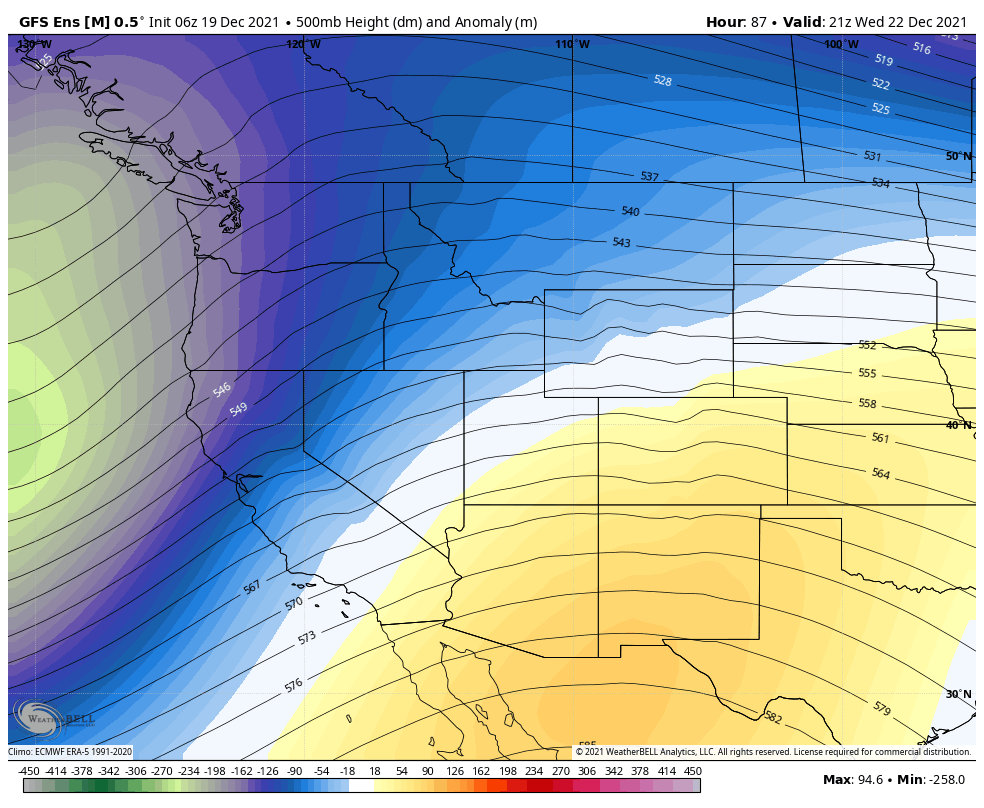 Low pressure will begin to impact the Pacific Northwest, BC, and the Sierra by Wednesday morning. Snow will be falling over many locations perhaps with some decent amounts in the western regions of BC or northern PNW. For the Sierra, the models show persistent snowfall from Wednesday through perhaps late next weekend with significant amounts (3-5 feet or more spread out over several days).  As this low moves towards the Rockies by late Wednesday or early Thursday it appears to bring moderate or heavy amounts of snow to the Sawtooth’s of Idaho, and eventually the Tetons and Wasatch. Colorado will see snowfall beginning on Thursday morning and continuing into Friday (Southern areas are favored, including the western ends of I-70).

This system has a similar signature to the last storm that just pounded the Sierra and may produce similar totals in the Rockies that we saw last week. Below: Low confidence snow totals (We are still 3-7 days out) for the west through late Saturday next week. This should be a good snow producer. 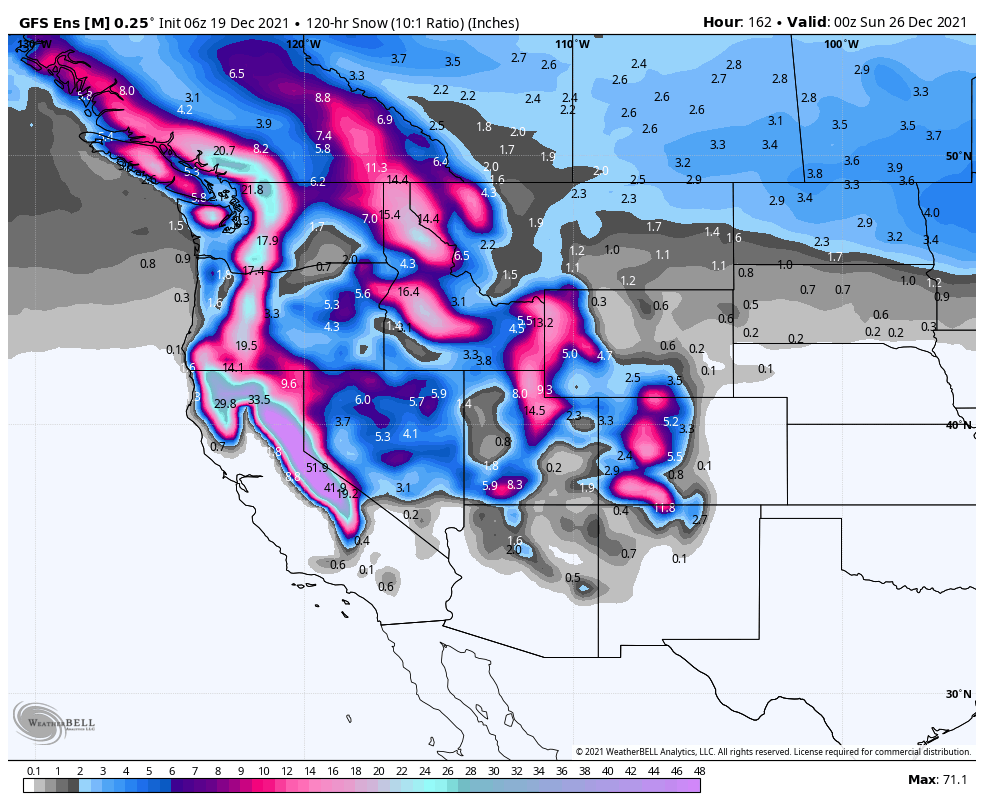 Hey, east coast, a storm is likely again for XMAS so in looking out at model data some show a Southern storm over Massachusetts, southern VT, NH, ME, while other models push moisture north into the core of New England Ski Areas. Timing: Likely peaking on XMAS day.

Below: Got to give these guys a ton of credit today for the dedication to ski in Massachusetts today while powder fell further north in New England. This is pure dedication! 1 inch new Sunday morning on a 12-14 inch base! Throw this guy a comment or a high five. Next weekend will hopefully look different. Photo: Jon Taunton Rigby at Wachusett Ski Area (Massachusetts) on Sunday December 19th. 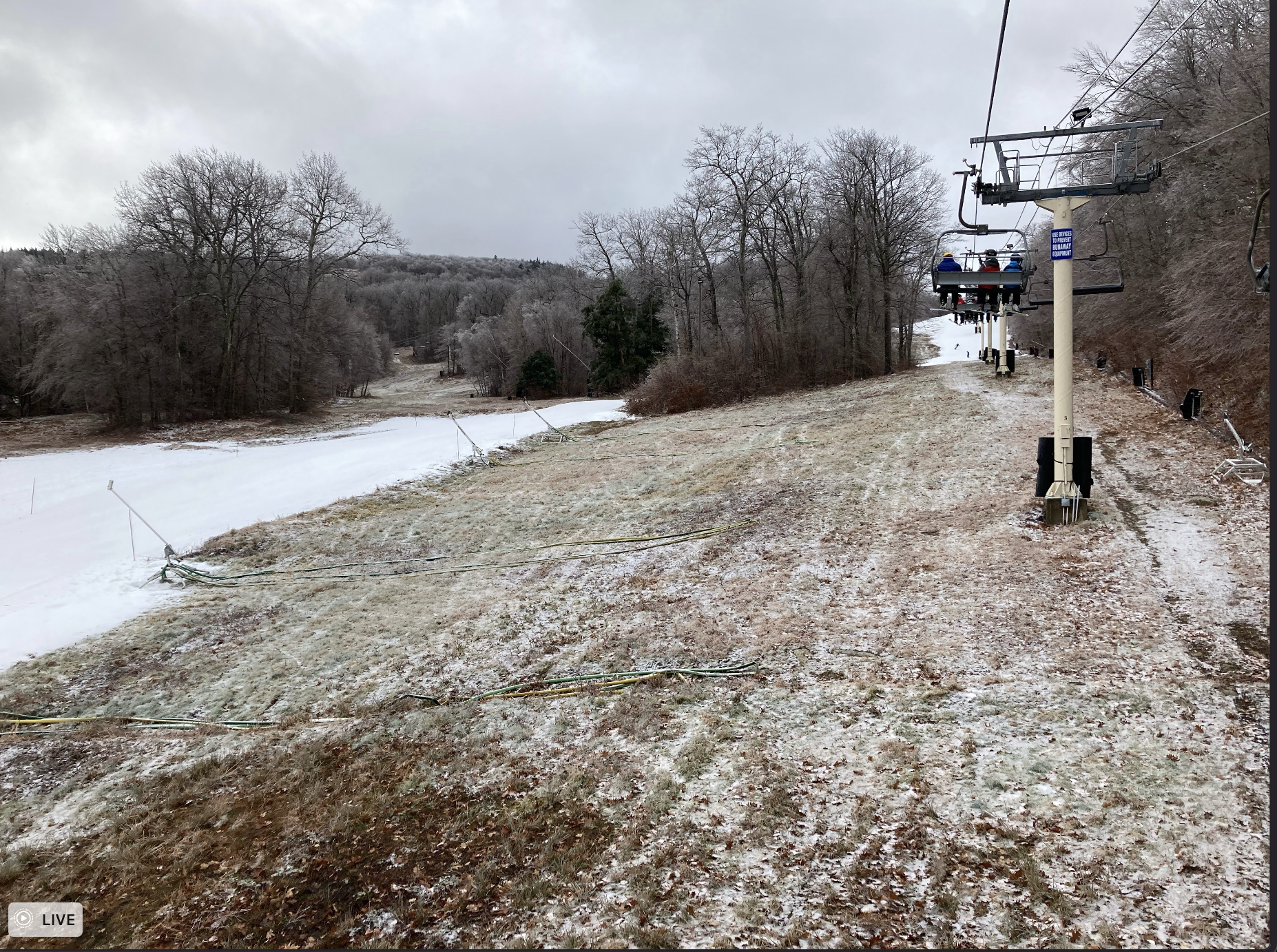 Enjoy the powder everyone, as it looks to be an active end to the next week.

Please consider a donation to Powderchasers to keep these forecast going. We are a group of 4.5 (4 Forecasters and a dog). Donate here.