Snowy Week Ahead For New England & BC Ski Areas

Snowy Week Ahead For New England & BC Ski Areas

We hope that everyone had a safe holiday. The weather center at Powderchasers is anxiously looking for snowfall for many areas of the west. In the short term, the winners of the week are New England and areas of interior BC. Some solid snowfall totals are being reported in New England as of Sunday morning.

Meanwhile, in Canada, Revy is reporting 30 CM of new snow in the past 24 hours.

Below: Snow cam at Revelstoke is over 27 CM in the past 24 hours (Decent quality likely).

It appears Whistler also scored some snowfall (19CM) but primarily at the upper elevations with warmer temperatures and rainfall at mid and even some upper locations.

The week ahead is going to feature strong high pressure for the Sierra and Rockies with warm temperatures. There may be intermittent rain showers for the PNW with a slightly cooler system due midweek (Upper elevations wet snow). Canada will continue to see weak energy every 24 hours peaking by Wednesday and Thursday. Some significant snow totals are possible for the summit of Whistler and areas of interior BC by Thursday. Unfortunately, temps will remain warm so it will be raining at lower and even some mid mountain locations (Snow levels around 4800 feet). Summits might ski pretty well this week in Canada especially by midweek. Today (Sunday) would have been a score if you are in interior BC (Summit of Revy).

In the extended period much colder temperatures move in at some point around December 5th. Canada will cool, followed by the spine of the Rockies (December 7th). Some snowfall is likely with this cold air especially ID, MT, UT, CO and Wyoming. Amounts may be limited to the cold air orographics versus any strong low pressure system. Models this far out can change so stay tuned to our forecast.

We have good confidence for the cool down in the December 6-7 timeframe, and less confidence on snowfall amounts.

Below: Temps at 4800 feet are cooling for Canada and the PNW by December 3rd. Very warm conditions for the Rockies and Sierra.

Below: Strong cold front over the Rockies by December 7th as cold air pushes further south. Snow showers are likely to accompany this front. Temps are shown at 10K feet. Snow totals are still too far out to forecast with accuracy but it’s likely some snow will accompany the cold air. 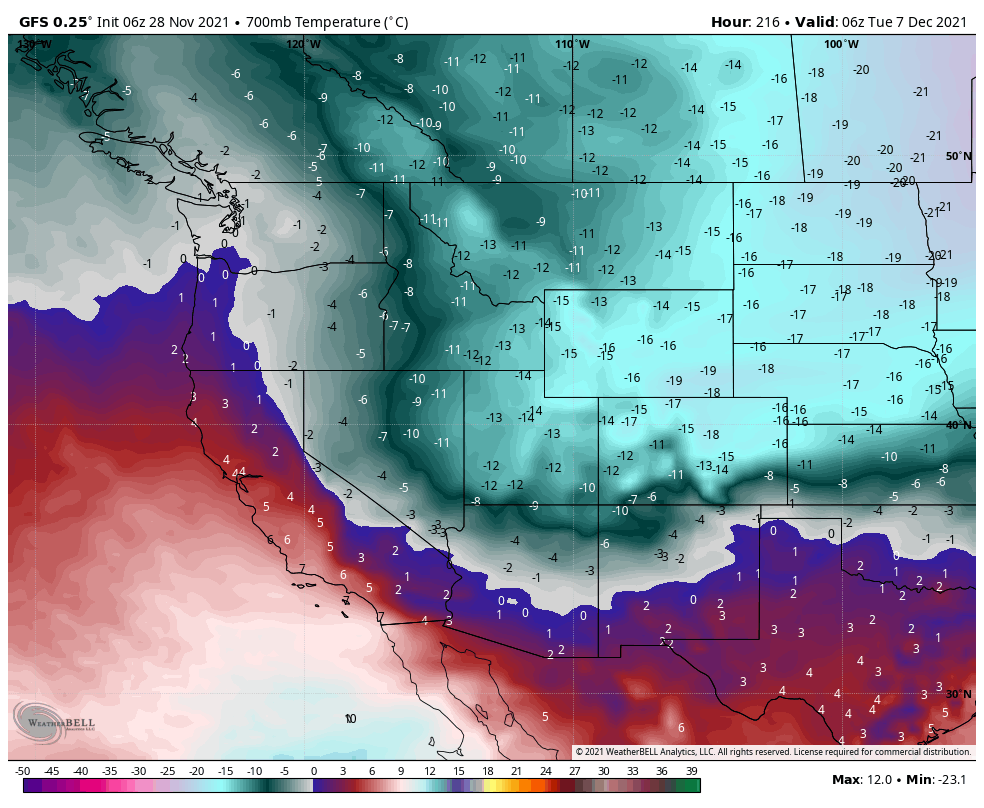 Below: The Height anomaly shows the deep high-pressure buckling but there are no clear signs of any significant storms just yet. (Whites, and the yellow diminishing) December 7th with the cold front. Some snow is likely with the path of the cold front. 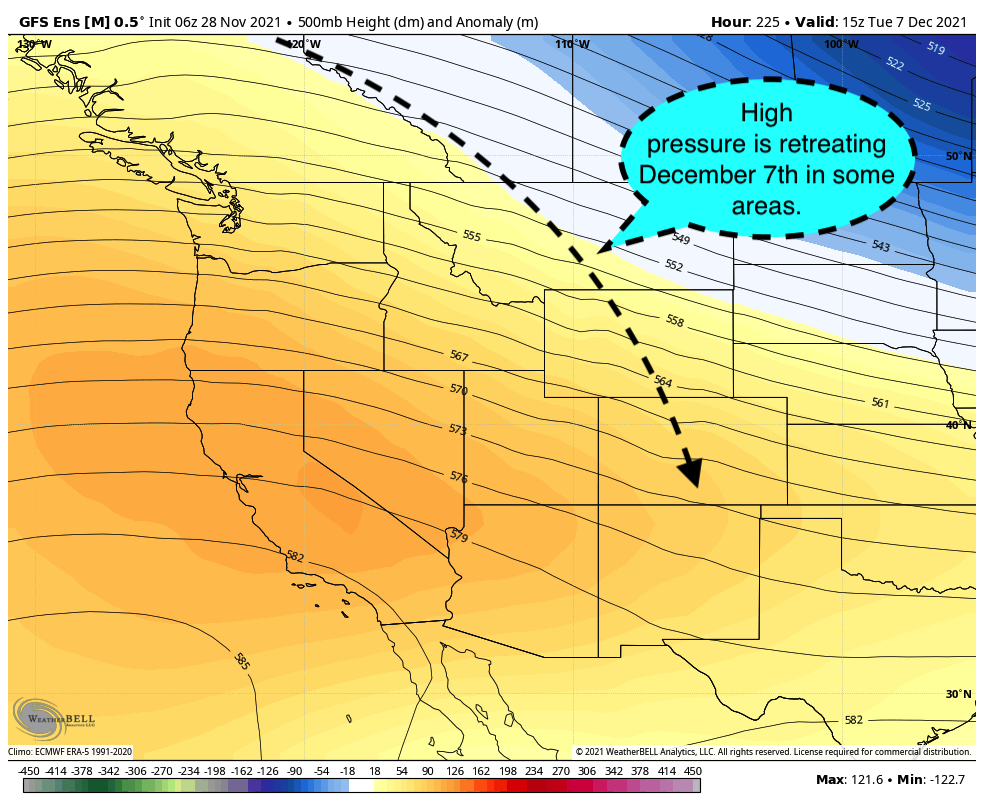 Below: Some snow is likely with the cold front in the December 7th timeframe favoring the spine of the north/central Rockies. Confidence is low with model data more than 7 days out.

Below: Looking farther out towards December 11th the trend is for possible low pressure to begin to impact a greater area of the west that might include the Sierra. Confidence is low with model data this far out but it’s worth sharing. Models will change as we get closer. 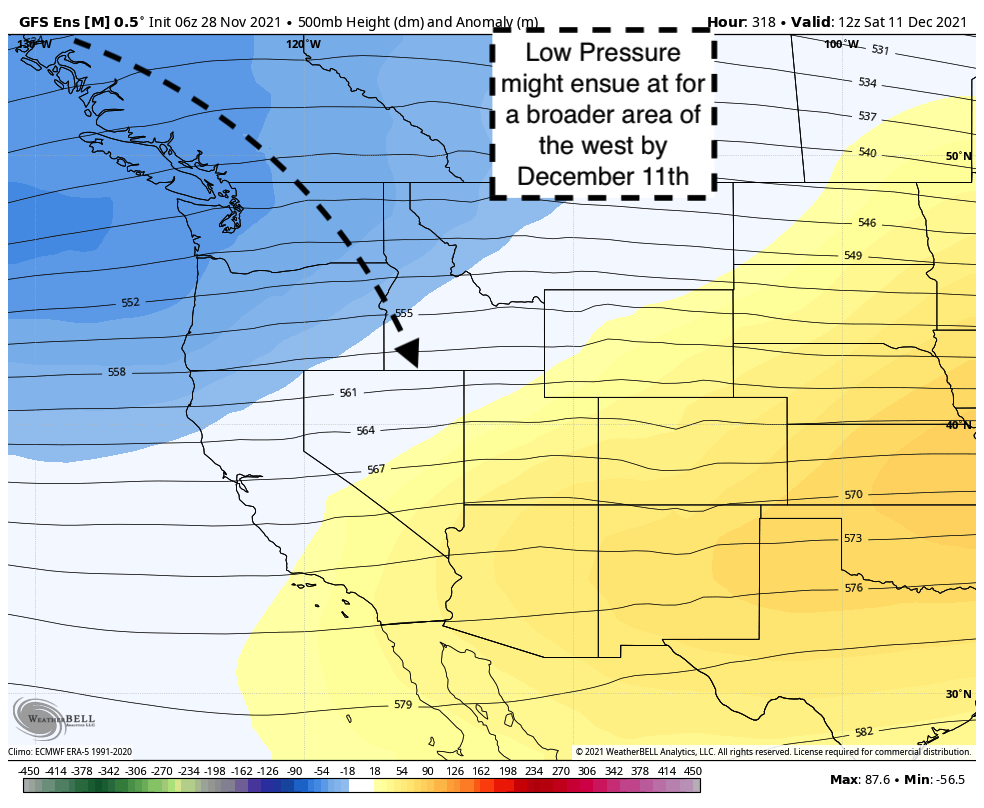 Chase to Canada, New England and let’s hope for better news soon for the Sierra, Rockies, and PNW.