We’re a couple days late in sharing Powderchasers most recent forecast but don’t worry! The forecast is still relevant and has some good news for our friends in BC and Alberta.

Check out the full forecast below! Will you be skiing or riding powder this week?

Summary:  Heavy snowfall is likely for the mid to upper elevations of BC, and Alberta over the next 5 days. Heavy rain for the Cascades changing to light or moderate snow by Monday night.

A very strong Atmospheric River is going to pound the NW and Canada over the next several days. Unfortunately for the Cascades 4-5 inches of liquid precipitation is likely with 8,000 foot snow levels until Monday. Colder air will filter into the Cascades bringing snow to highway passes and ski areas Monday/Tuesday, however amounts don’t look impressive.  Bottom Line: A sloppy mess for the Cascades, with some snow on top of frozen surface for Tuesday.  I think Baker is trying to open next week (Hmmm).  Canada will fare better with significant snow at mid or upper elevations.

Below: Atmospheric River pumping warm air and copious amounts of moisture to the NW and Canada Saturday night to Monday night. SW flow is pushing moisture north along with warm temps (common with an AR event). 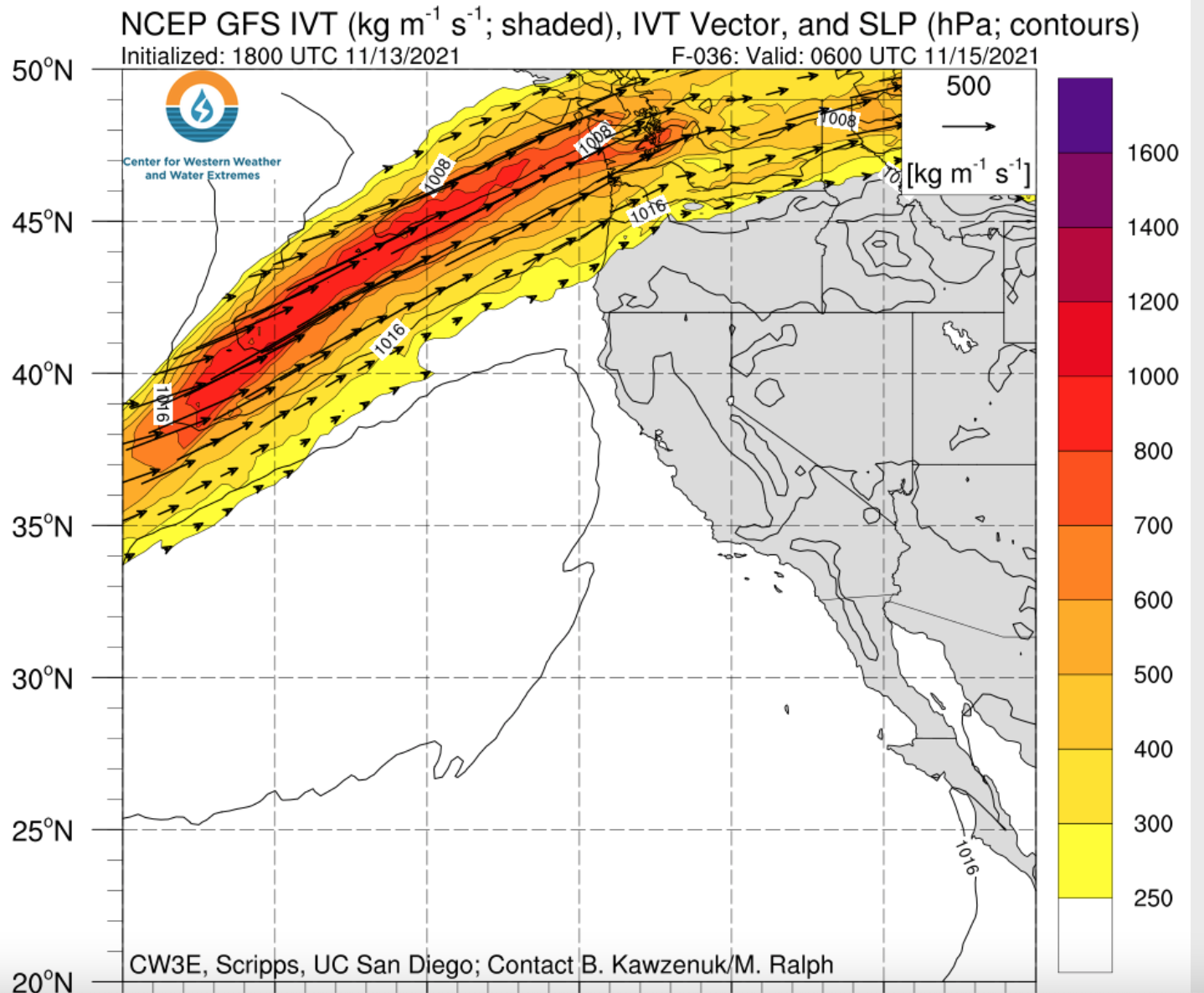 If you want POW, head to Alberta where Banff, Sunshine Village should score significant snow from Saturday night to Monday night. The snow levels will be low Saturday night (Post time) for most of BC/Alberta but rise to around 2,000 meters Sunday/Monday. Heavy wet snow (Base build galore), will fall at most mid and upper elevations. Some snow is also possible at the bases of especially Sunday morning. Cooler temps and perhaps better quality by Monday or Tuesday.

Below: Whistler upper village Saturday night. WOO HOO. but its going to warm by midday Sunday 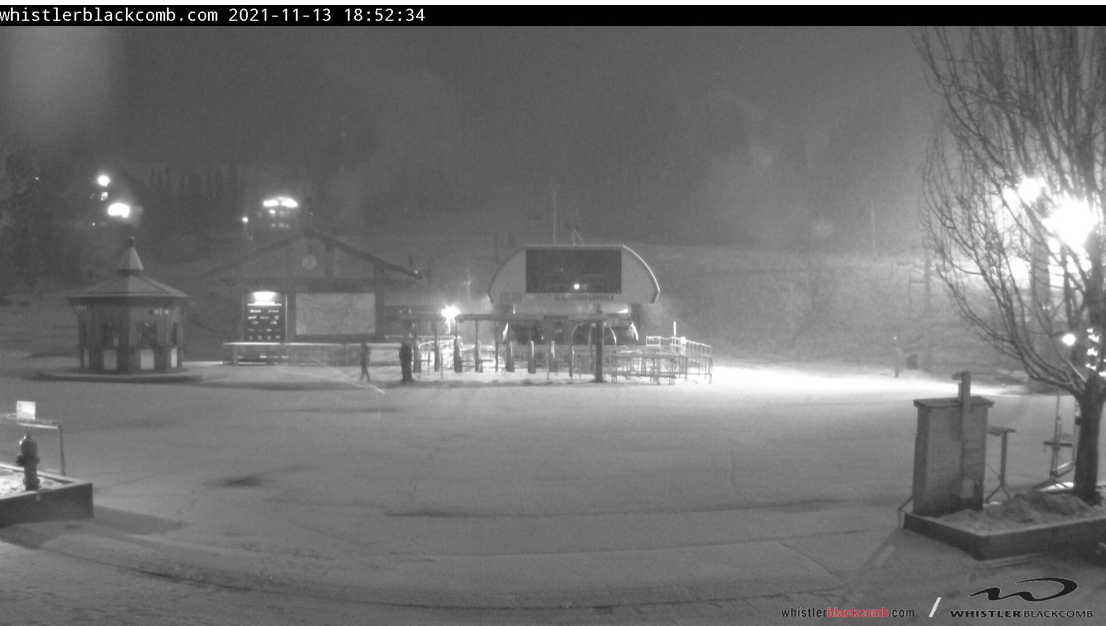 Below: 4800 foot temps (Sunday morning) showing cooler temps for Canada, but very warm in the western Cascade Range. Heavy rain for the Cascades! Heavy wet snow for the mid to upper slopes at Whistler, Revelstoke and most of Alberta (Banff, Sunshine Village). The cold front moves in on Monday. 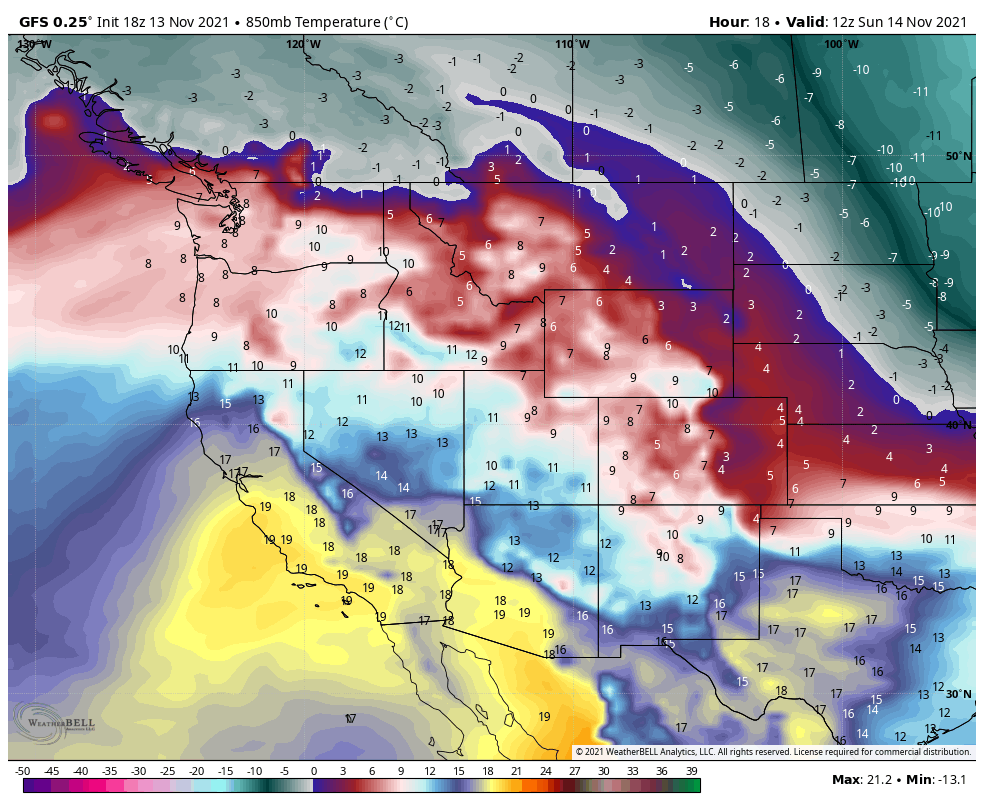 Below: Much colder air with a strong cold front makes its way into the PNW by Monday night. This will bring snow to the Cascade Passes albeit moisture is weaning (4-8 inches possible). Canada will continue to score with even colder temps. 4800 foot temps are below freezing in most of the PNW. That cold air will work towards the Rockies impacting most of Montana and Wyoming by Tuesday. 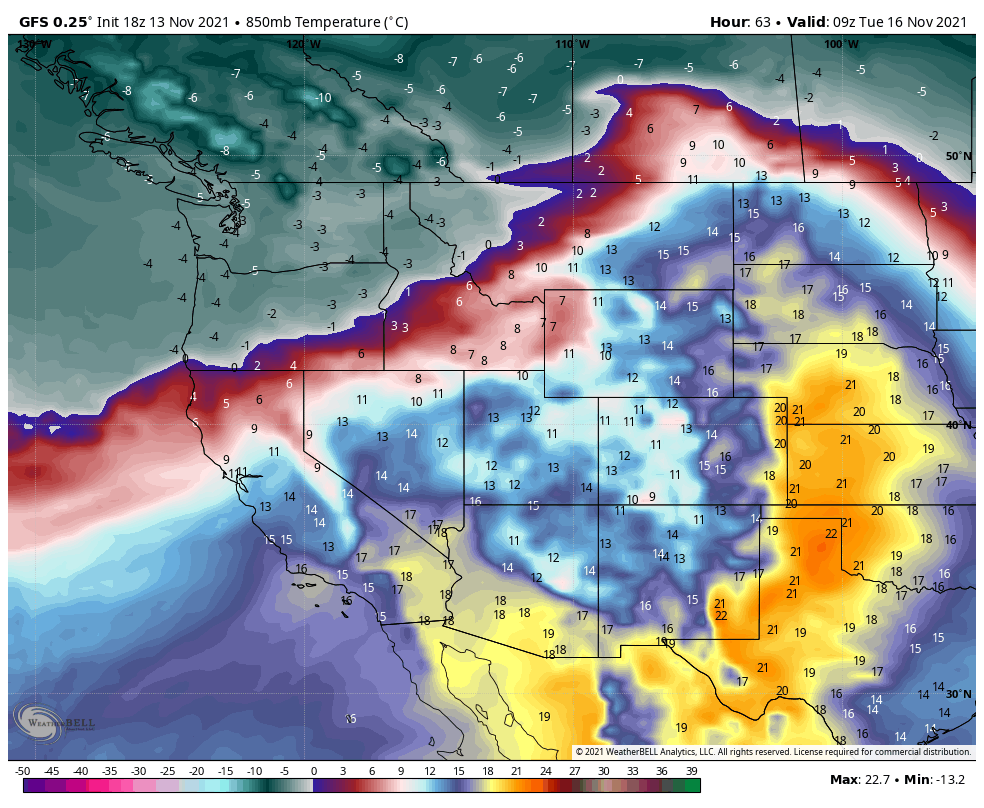 Below: Signifiant moisture with an atmospheric river, warm temps, with up to 5-8 inches of liquid by Monday mid morning (Canada). This is going to fall as rain in the Cascades unfortunately (4-5 inches). Our friends at Selkirk Powder should see some light or moderate snow by the beginning of next week. 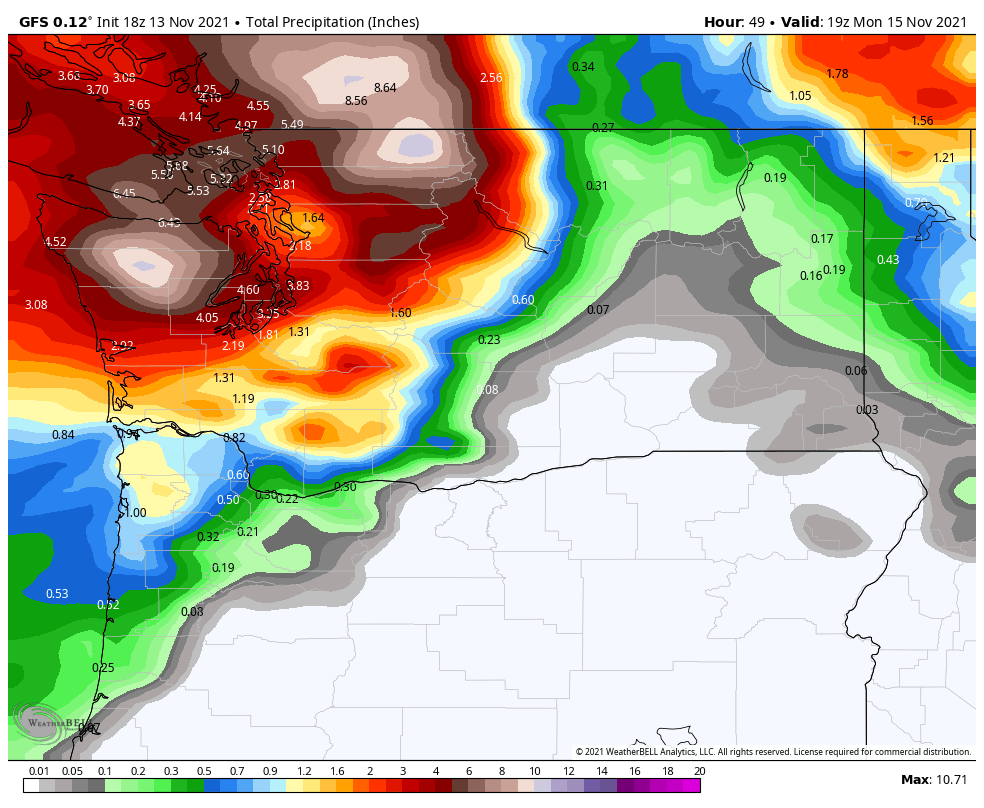 This system will skirt east but favor the North regions of the Rockies bringing snow showers to Montana and perhaps as far south as the Tetons by Tuesday.  Amounts don’t look impressive, however the southern regions of BC might see an increase of snow by Monday (initial action is further north). Sandpoint Idaho may be too far south as well, so for now I am only forecasting light to moderate snow for this region and northern Montana favoring Whitefish and Glacier National Park Monday or Tuesday.

Below: Focus for snowfall is over Canada with perhaps 2-3 feet at upper elevations by Tuesday morning (Central BC, Alberta, and western BC including Whistler). Wet snow initially followed by lower density by Monday/Tuesday in Canada. The northern sections of Washington are depicting snow at the highest peaks above the Sk Areas (Perhaps Mt Baker-Not the ski area). Moderate snow is likely for the Cascades with the cold front Monday but that’s after the 4 plus inches of rain! 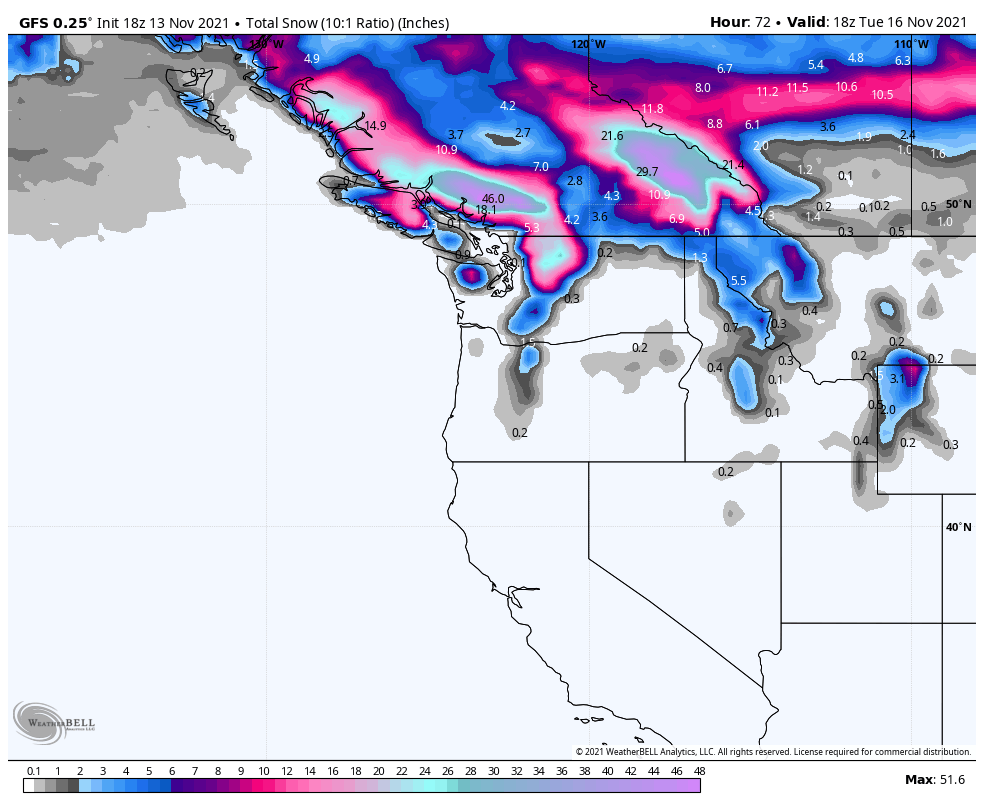 After taking a quick look at the extended, it’s possible another system drops into the PNW late next week and pushes a bit further south into Oregon.

Today, I was in the Tetons and grabbed this shot of the snowy peaks with a Grizzly in the foreground. Snow is confined to the upper elevations only. Follow @powderchasersteve via instagram 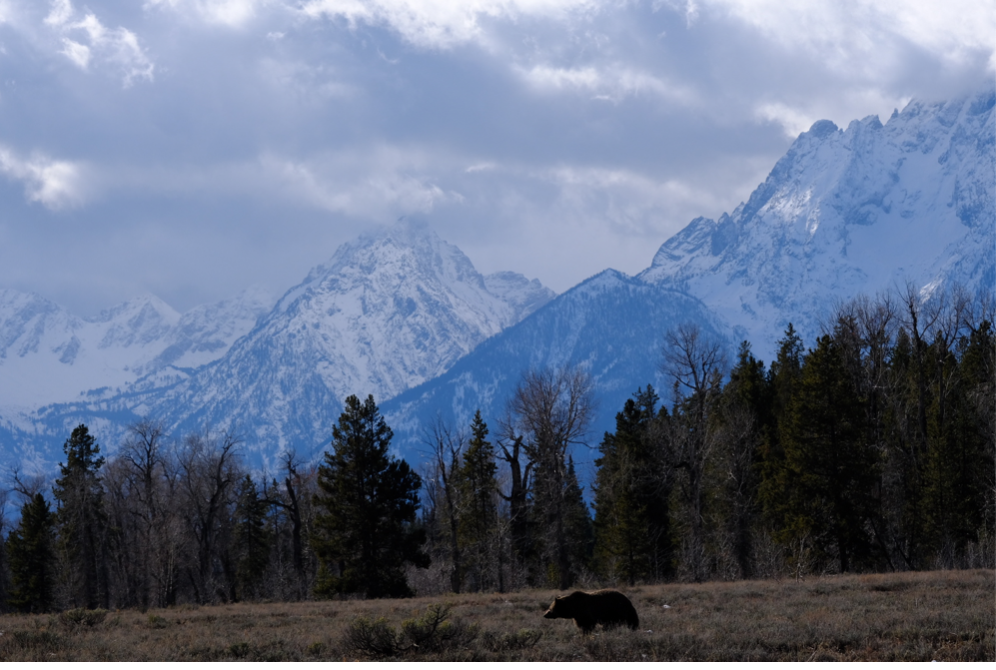 Enjoy the rest of the weekend! If you are in Canada, enjoy the POW.