Check out the latest forecast from our friends over at Powderchasers. They’re predicting significant snowfall totals in the PNW, Northern Rockies, and Northern Sierras over the next 5-7 days.

Will you be skiing powder this week? Read below to find out!

POWDER ALERT- COLDER TEMPS NEXT WEEK AND 1-3 FEET OF SNOW POSSIBLE IN SOME AREAS.

Forecast: The Powder Alert has been hoisted for what appears to be a parade of systems all aimed at the west coast. Temps will start out warm late this week with a cooling trend in the Cascades by Sunday/Monday. That cooling trend continues for most of next week. The northern Rockies, especially the central Panhandle of Idaho, West-Southern regions near Stanley, Ketchum and up to Tamarack could fare very well in the extended period. It’s possible that some resorts in the PNW, and even the higher terrain of the Rockies pick up 1-3 feet in the 5-7 day forecast.

California may also score powder (Teaser with high snow elevations this weekend) with models showing a chance for a more significant storm by Tuesday/Wednesday!  This will bear watching for Cali.

Announcement: Powderchasers will be at Shredfest in Salt Lake City this Friday and Saturday so please stop by our booth for some free swag. We are giving away tickets to this event on our social media feed (@powderchasers). Be sure to check out this great event with live bands, films, professional athletes, and other great stuff to stoke the pre winter endorphins.

Below: Idaho could score some decent amounts through mid next week. 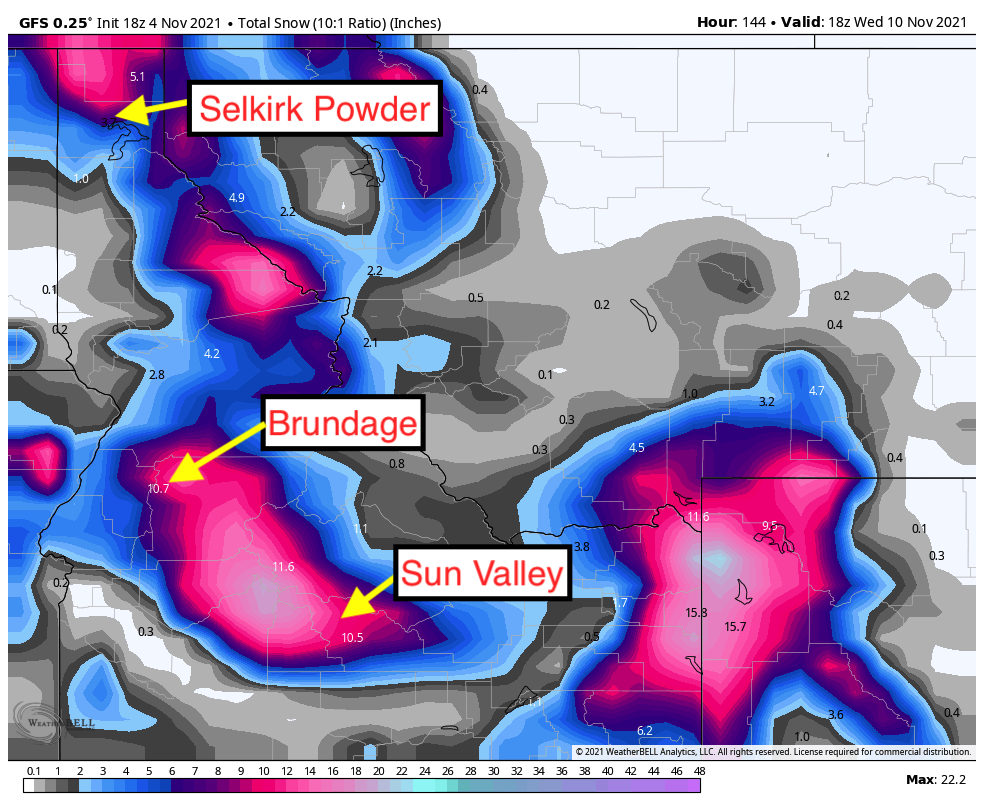 Below: Decent amounts for the Cascades of Washington and Oregon as cooler temps drop snow levels to the bases by early next week. Higher amounts are likely near Mt Baker initially (S, SW flow) before a westerly or NW flow kicks in favoring mountains further south. Oregon might see the highest amounts further north but most ranges including Bachelor should do well. 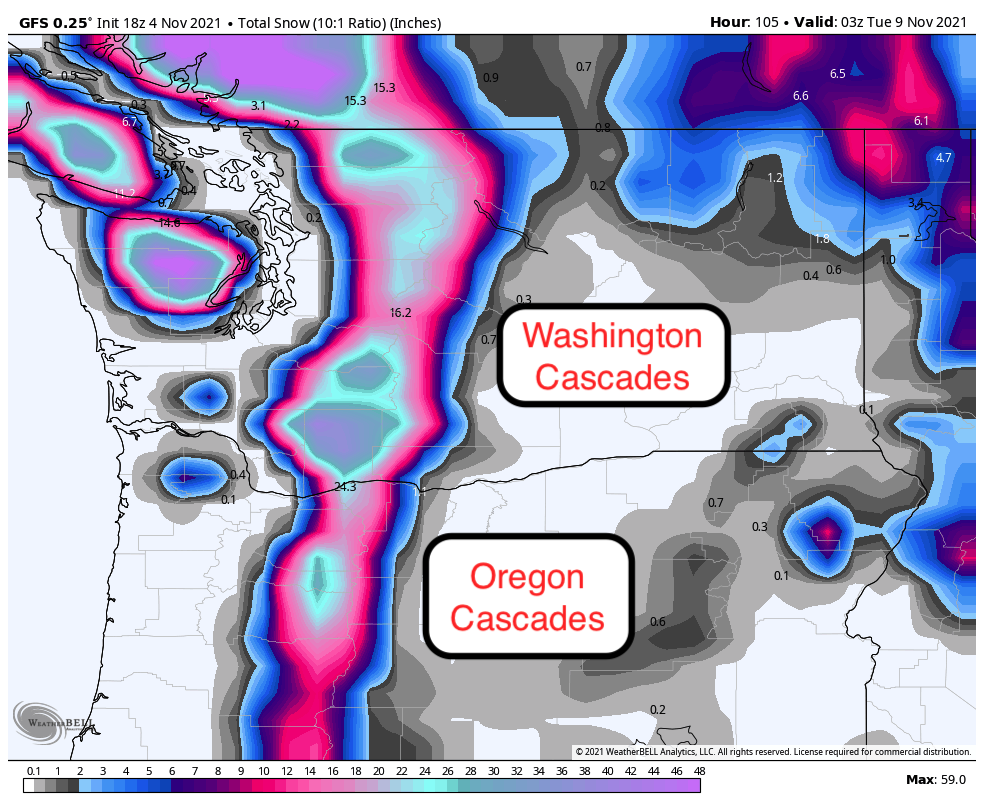 The models also agree on some decent snow totals for the Tetons mainly from late Sunday to Wednesday next week. This system will likely drop snowfall to the Valley floor especially Tuesday as temps cool. The upper terrain of the Tetons are likely to see significant snowfall next week.

Below: Total snowfall through Thursday for the Tetons, Wasatch and southern Montana. Confidence is high on snow next week, with lower confidence on amounts being this far out. The brunt of the storm might focus on Wyoming with Utah a solid wildcard. Colorado is addressed in the extended forecast. 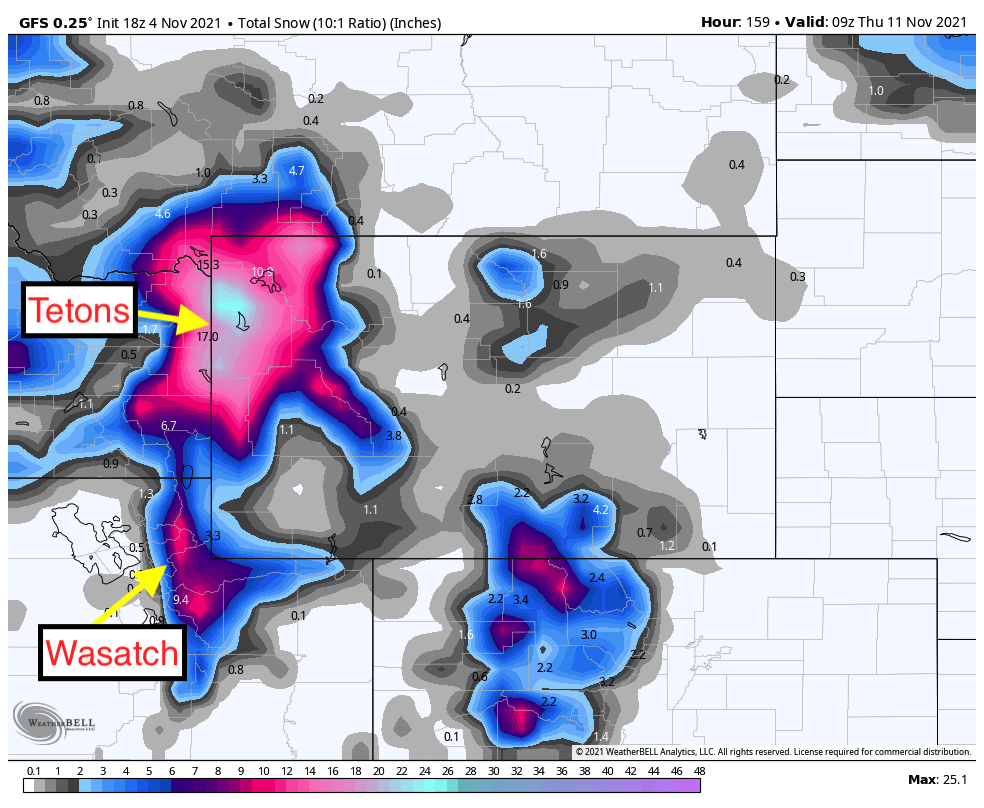 The Wasatch sits a bit south of the highest precipitation totals, however some NW or West flow could strike up some decent amounts at some point early next week especially along or north of I-80. The Cottonwoods are a strong wildcard (Will update amounts in a later forecast). Confidence is high on snowfall, but just a bit early to forecast amounts.

Elsewhere, more limited  moisture pushes north into southern Montana so it is possible Big Sky comes up with some surprises. Further north, amounts will be less, with some snow also falling in Whitefish and even around the Missoula foothills.

Extended Pow: Much of the extended forecast was addressed above. Colorado finally grabs snowfall Tuesday-Friday with an emphasis likely in the northern and central mountains. This should include the resorts along I-70, north to Steamboat, and further south towards Aspen, Leadville, and even Telluride (Northern San Juan Range). Confidence is high on snowfall next week. Confidence is low on amounts since the models will change as we get closer.

Below: This map is through Wednesday (General overview). Colorado should deepen later in the period beyond this map date (Wednesday afternoon). California looks impressive on these maps, especially the southern Sierra Range. 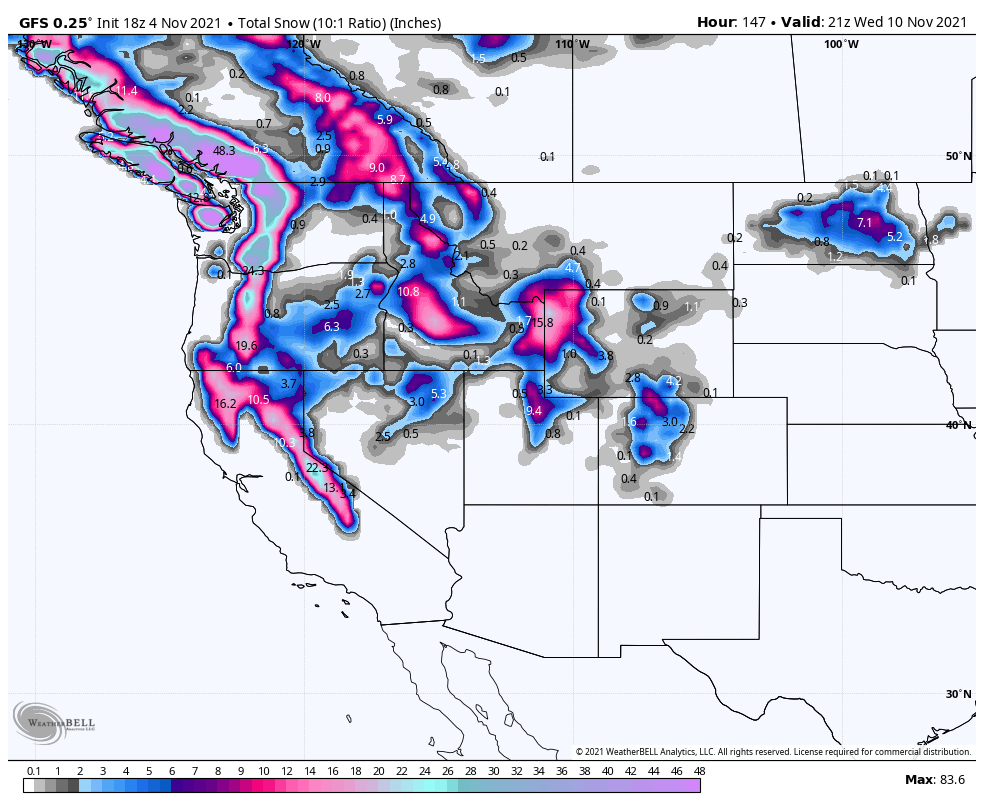