The west is about to get absolutely slammed with rain and snow over the next few days. Our friends over at Powderchasers.com have the forecast you need to get prepared, and stoked for winter at high elevations.

Check out the full forecast below!

Summary: Record amounts of moisture will be logged in California early next week, with much of the west receiving high elevation wet snow. 1st event hits this weekend with the Bomb Cyclone slamming the west by late in the weekend and early next week. Some areas nab 3-6 feet of snow.

Forecast: Both a Bomb Cyclone (Intense drop in pressure) and an Atmospheric River will slam into the west late this weekend into early next week. October records will be hit especially over California with models pumping out widespread 5-7 inches of water, with perhaps higher amounts on the peaks of the Sierra. The weekend will feature a tease before the main event with high elevation snow (8-10K). The summit of Mammoth looks to be favored initially this weekend (upper peaks). The Bomb Cyclone slams into California Sunday-Tuesday.

Cooler air filters in late Sunday/Tuesday for the Sierra where snow levels will drop to the highest mountain passes. The Sierra Range is likely to grab 4-6 feet of wet snow above 8000 feet with much lower amounts at the bases. Lake level snow is possible albeit light at some point Monday-Tuesday with a cooling trend. Avalanche danger will be on the rise rapidly at upper elevations (High moisture content snow, strong winds). Burn scar runoff, mudslides and other hazards will accompany this record setting event. This might be an event where you may want to avoid the backcountry.

Bottom Line: Initial event this weekend might set up a surprise over the summit of Mammoth, with heavy wet snow over the entire Sierra Range late Sunday-Tuesday. Cooling Sunday PM to Tuesday with brief periods of wet snow at pass levels. Epic proportions of moisture, October records, will produce deep base building snowfall but primarily mid or upper peaks.

Below: Epic proportions of wet snow (3-5 feet will fall over the highest peaks of the Sierra) 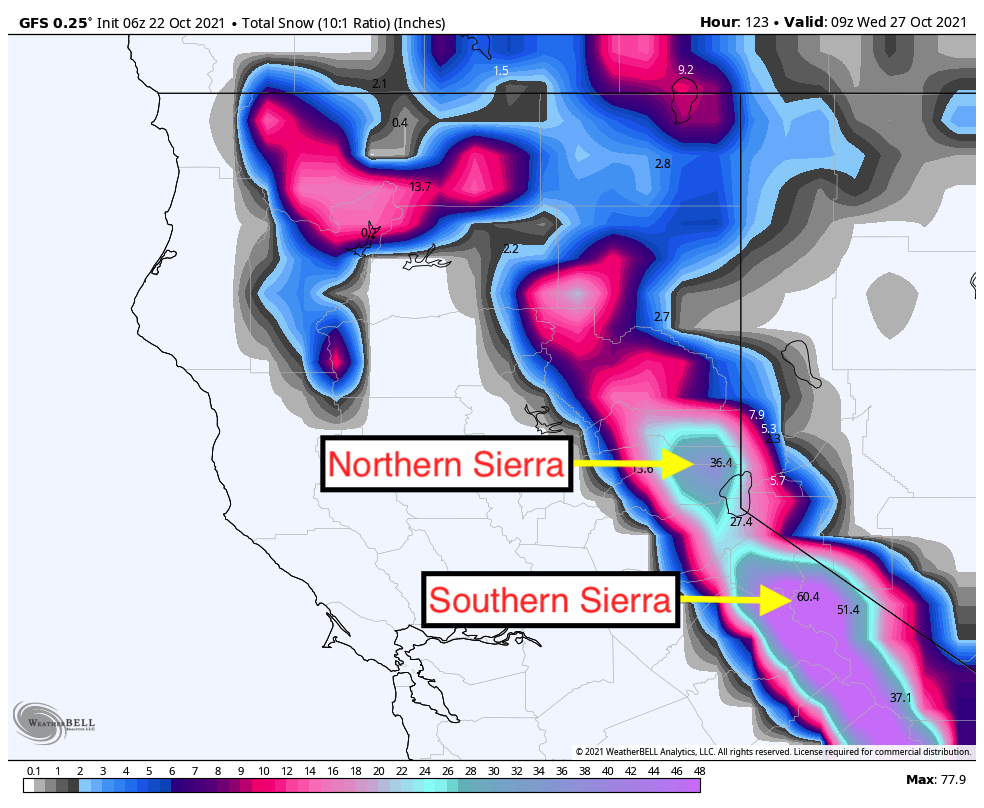 Below: @powderchasersteve got out for my first time of the season watching the sunrise over the Wasatch on Wednesday at Alta.  Photo @LukeStone 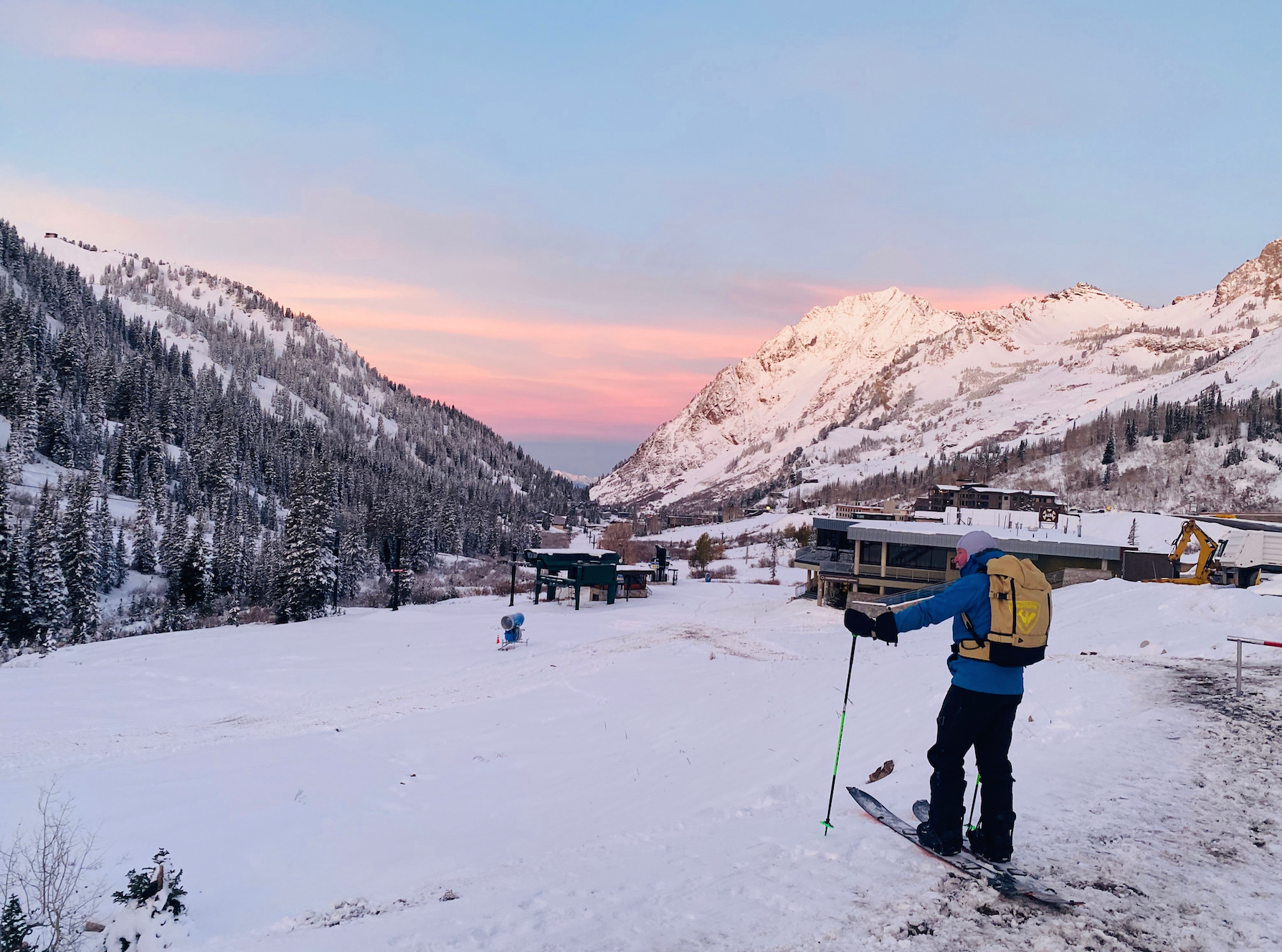 ELSEWHERE IN THE WEST

high elevation snow will be falling over the Cascades (Above 5500 feet) with temps too warm to produce any highlights other than the highest peaks. Rain will be falling at lower elevations.

Atmospheric Rivers often accompany south, southwest winds (Warm and moist) with a decent amount of moisture pumping up towards Central Idaho. Warm temps initially will keep the snow line above the valley floors until late Monday/Tuesday when winds veer West Northwest. Currently, the highest hopes of deep snow will occur over the Sawtooth range from Sun Valley and north (Hailey).  It’s possible the summit of Sun Valley pick up 1-2 feet of wet snow especially as the winds push in from the south initially (Warm and wet).

The Tetons are consistently highlighted on models for receiving copious amounts of moisture primarily Monday-Tuesday. Temps will be cold enough to drive the snow line to the Valley Floor by late Monday-early Tuesday however amounts will be light at lower elevations. The peaks of the ski areas could grab 12-18 inches of wet snow. JHMR seems favored initially with South, SW winds that eventually veer west and NW favoring Targhee on the latter portion of the event as moisture weans.

Below: We like the odds of the Sawtooth Range in Idaho and the Tetons 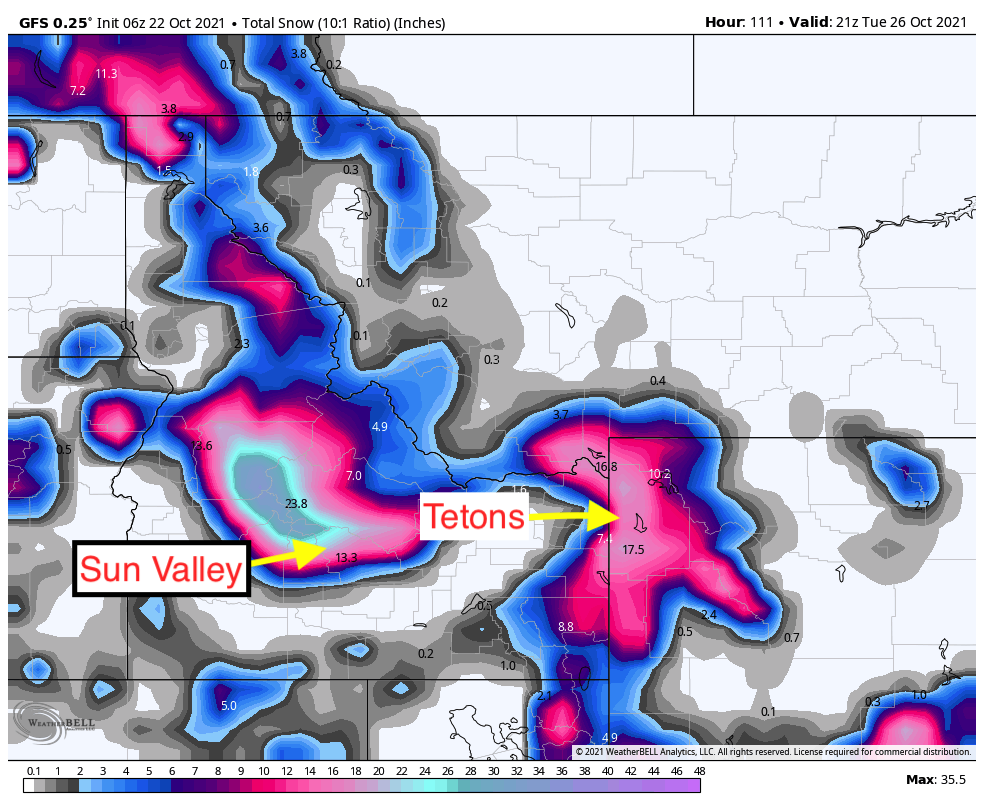 Utah is a wildcard with the models not showing consistency. While heavier moisture is falling over the Tetons a decent cold front Monday night into Tuesday should offer the best chance of snowfall for the Ski Areas. This system pushes in with SW flow initially (Might favor the Northern Wasatch range initially towards Snowbasin). West northwest flow could produce up to a foot of snow above 8,000 feet for Tuesday morning especially in the Cottonwoods. Winds will be very strong with this event. Bottom Line:  Weak storm this weekend with light snow and warm temps. Stronger system Monday into Tuesday, rapidly dropping snow levels, with a best guess of 6-12 inches of dense snow (Northern Wasatch range might outperform areas south of I-80). Lowland snow is possible by Tuesday morning with the snow level dropping to 5500 feet.

Below: University of Utah Plumes showing a widespread range of total snowfall for Alta (Tuesday) which we believe is overdone on amounts.

Finally for Colorado light snow showers for the highest peaks of the northern and central mountains this weekend will increase late Monday night and Tuesday. Models show modest amounts for areas in the northern and central mountains. Winds from the SW Monday night might favor Elks and Flattops (Aspen-towards Steamboat) initially before a westerly flow takes moisture over I-70 Tuesday. Westerly Flow could bring light to moderate snow to a widespread area of the Colorado Rockies. NW flow takes hold late in the storm which might keep snow showers going over Vail Pass, and areas of Summit County late Tuesday. Bottom Line: Moderate event for most of northern and central Colorado. Winners might end up from Aspen to Steamboat, with Summit County on the lower end of moisture. Beaver Creek is a wildcard pick. Snow will drop south towards Telluride with lesser amounts over the eastern San Juan range.

Unsettled conditions will continue over the Pacific Northwest mid to late next week. Cooler air will filter in late in the week with another trough possibly dropping over the Northern Rockies by next weekend. Be sure to check out the specials at The Tire Rack who is our official winter sponsor for wheel and winter packages.

Below: Mid next week: Low pressure centered over the PNW including northern Idaho with the central Rockies and Sierra drying out. 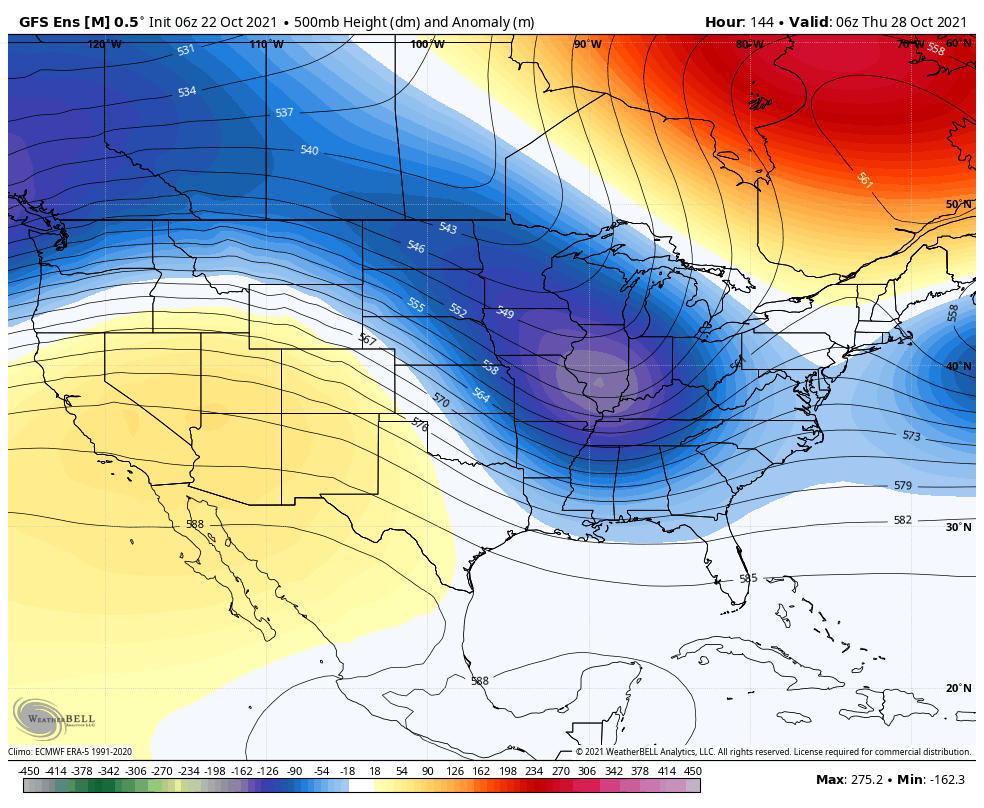 Below: Cooler air and another system might impact the northern Rockies by late next week and drop further south. 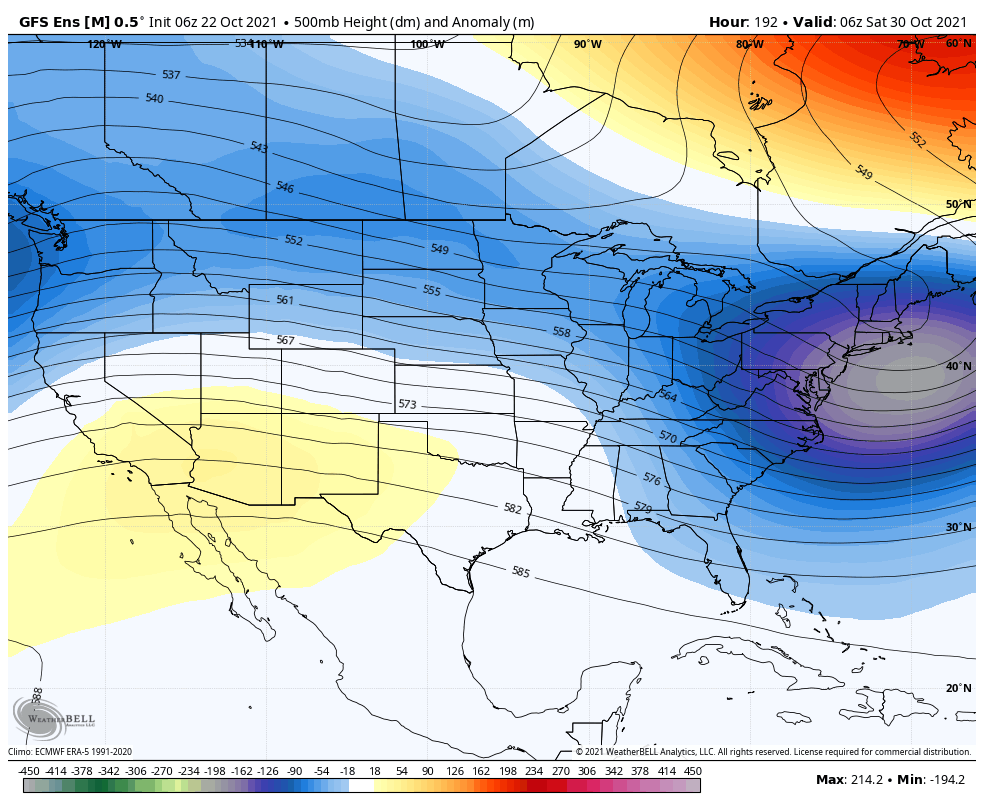 Enjoy the powder everyone! Remember, low tide, increasing avalanche conditions and stay healthy for your upcoming season. It’s only October! This is going to be a wild storm (Wind, Rain, Snow, Deepness, Mudslides, Record setting moisture for the Sierra). Please support Powderchasers with a donation or join our custom concierge *We will steer you to the deepest snow*.