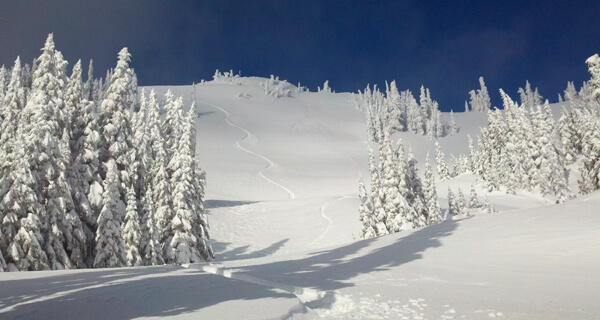 Several storms will impact the west this week, specifically Thursday night to Friday and another late Saturday to Monday. Significant snowfall is likely in the PNW, Sierra, and Rockies. Spread out everyone and chase into a wide area of the west. You could score powder almost every day through Monday.

If you are looking to escape the crowds, love powder, and want a small group Heli experience in Alaska consider these remaining seats at Alaska Backcountry Guides our endorsed partner for Partner. The only seats left are 3/15-3/21 (5 seats) and 4/26-5/2 (4 seats). Powderchasers is giving away a free Concierge Package (Mid level) good for this or next season for anyone that books with Alaska Backcountry Guides.

Going into the forecast on Tuesday I mentioned generally light snow for most mountains of Colorado, Utah, and Wyoming (2-4) with the exception of some spots in Colorado that could score 4-8 (Steamboat, Crested Butte, Aspen). National Weather had 6-12 inches for many locations but the models just did not convince me. On Wednesday morning 7 inches has fallen Steamboat and 4 inches at Crested Butte putting me pretty close in the forecast ranges. Aspen had less in the 1-2 inch range (Less than forecasted). Snow is still falling near Aspen and areas south so it’s possible they nab a few more inches on Wednesday.

The next series of storms will feature many chase options. On Thursday-Friday the Pacific Northwest could score deep blower, especially in Oregon with the southern Cascades of Washington a solid wildcard. The American Model has pushed most of the deepness into Oregon while the European model still advertises full-on deepness for much of central and southern Washington. The likely scenario that plays out will favor the southern Cascades especially Oregon for Friday morning. Snow will be falling on roadways surrounding Seattle, especially in Pierce County and areas south. Significant lowland snow is possible in Oregon (12 plus in the foothills). Plan on 12-18inches for Oregon and perhaps 5-12 for southern Washington. Ride late Thursday and early Friday (Blower). The Seattle Metro area could nab 1-4 inches depending on which model wins.

Below: The European Model (Highly Trusted) is the only run that still shows significant snow for Seattle and most of the Central and southern Cascades of Washington for Friday. The American, NAM, and others have been trending this storm further south. 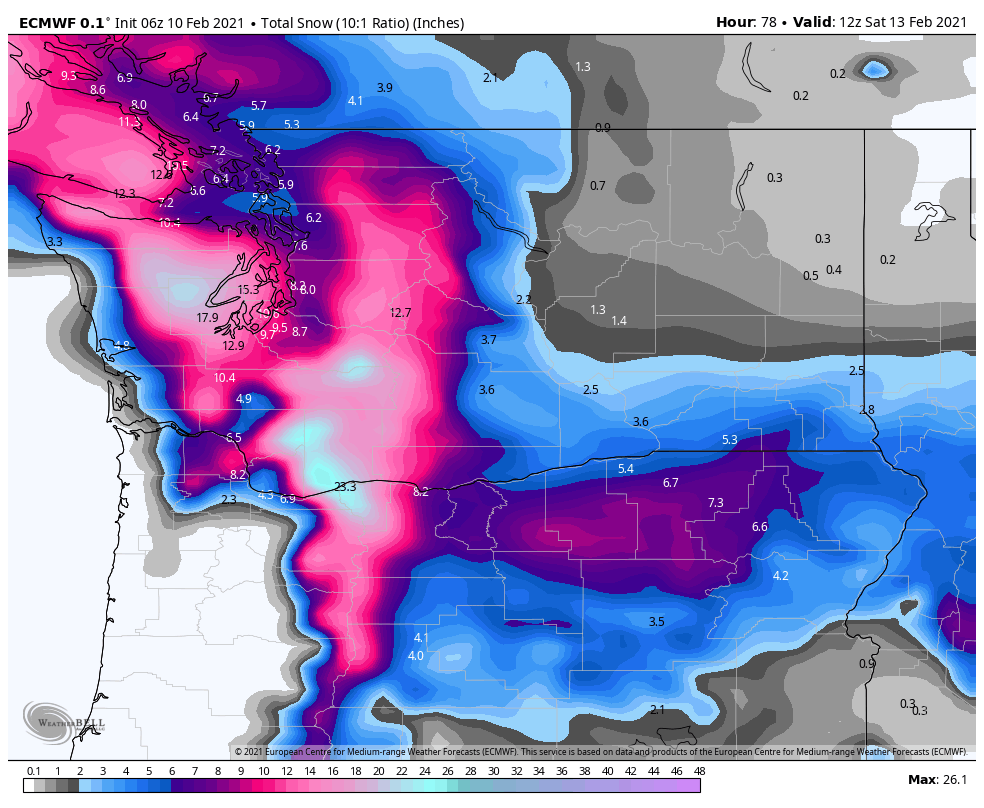 For the Rockies and Sierra, moisture in the PNW drops a good foot of pow for the Sierra Range for Friday morning (Nice timing) with strong winds Thursday decreasing on Friday. Density will be on the medium to warm side initially trending colder for Friday morning where it might still be snowing.

From here, everything pushes east with similar timing for the Rockies. Thursday night sees an increase in snowfall that continues into Friday. Western Idaho, perhaps Brundage could score in this pattern followed by the Tetons, Wasatch, and a good portion of Colorado. The models show slight favoritism to the northern or central Wasatch (Snowbasin, Powder, Beaver Mountain, Park City, Deer Valley) initially with WSW winds. Winds will eventually veer to the WNW that could benefit the Canyons side of PCMR, and most of the Cottonwoods especially Friday morning. The Tetons should land some decent amounts for Friday morning and slightly colder temps than Utah. Bottom Line: Friday will be a powder day in many area’s, and models are not in agreement for positioning (Tough call who will be deepest Friday between Wyoming, Utah, and specifically which resort). Snow reports on Friday morning might favor northern resorts in Utah where reports Friday afternoon may play catch up for areas south of I-80. Expect 8-14 inches in many areas by midday Friday for Wyoming, Utah, and western Idaho.

Below:  Friday Morning- 4800 Foot temps- Very impressive temperature spread with bitter cold readings over Montana and much warmer conditions for southern Wyoming, Utah, and western Colorado. That arctic air will move further south and west by the weekend. If you are riding in Montana expect very dangerous wind chill readings as air temps will be -22–26F at the bases! 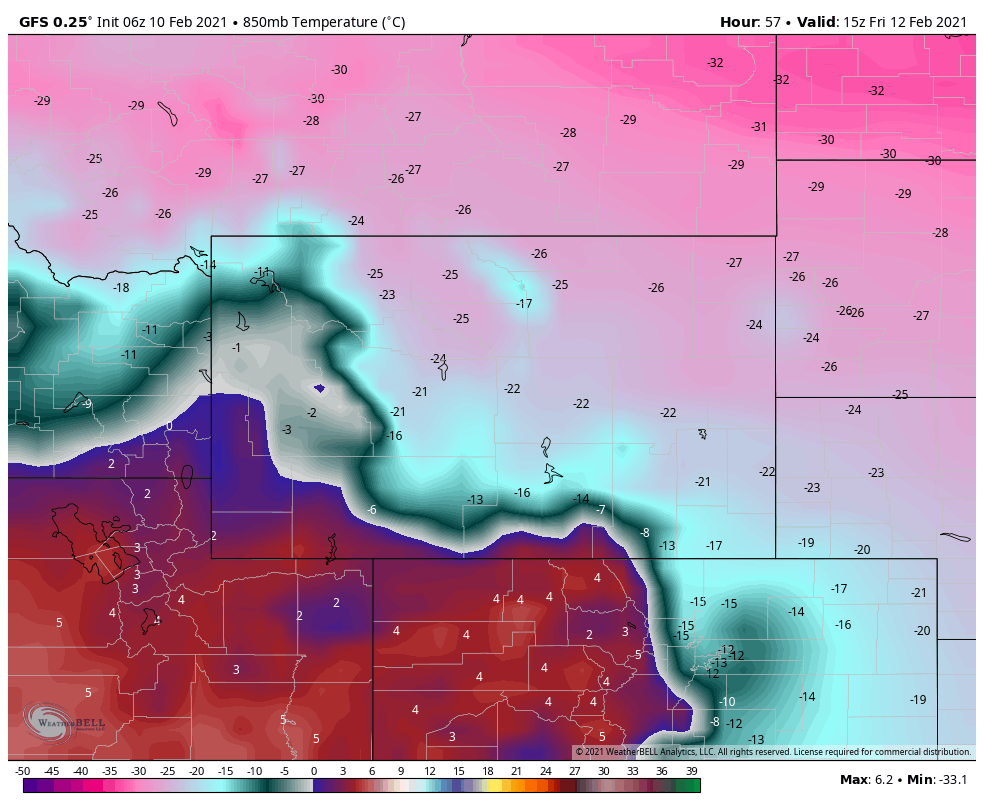 For Colorado, slightly colder temps edge into the State for Friday/Saturday with better snow ratios. Currently, the models show some snow Thursday night with stronger precipitation rates early Friday through the last chair. The favored locations will likely end up north of I-70 towards Rabbit Ears Pass, with snow dropping south towards Glenwood (Sunlight), Aspen, and Crested Butte.  Areas furthest north might score upwards of a foot of powder where spots further south in the 5-10 inch range. Further east towards Summit County will likely see moderate snow by midday Friday (3-7). Colder Temps over the Front Range east of the Divide could land some surprises near Eldora, or even Berthoud Pass (Wildcards).  The San Juan Range might not be too far behind as decaying moisture reaches Silverton, Telluride, Purgatory, and Wolf by Friday morning. Bottom Line: Storm ski fresh powder for 1st chair Friday and deeper snow by mid or late day in Colorado. Currently the further west you chase (North or south of I-70) stands the best chances of deeper snow. Snow also move into northern New Mexico for late Friday into Saturday.

A Polar Vortex moves down from the north late this weekend. Significantly colder temps will be felt over the Rockies by Sunday. Another strong system spreads into the Sierra and Pacific Northwest late this weekend. That system moves into the Sierra Saturday and takes direct aim at the Ruby Mountains in Nevada, northern Arizona, New Mexico, Wasatch Range of Utah, and a wide area of Colorado late this weekend. This is likely to spread some big numbers for the west, especially the Rockies as the system grabs very cold air and brings some deep powder to many areas. The southern resorts will be favored with moisture streaming north additionally.

Below: You can see a sharp cold front (Polar Vortex) moving down over Wyoming and as early as Saturday with Utah, and Colorado recording big drops by Sunday/Monday. Colorado seems to be in the coldest air so snow ratios on Sunday or Monday could be significant in many areas on the late weekend storm. All areas could reap deep rewards with these temps and moisture expected for areas of the Rockies.

Yet another system late this weekend slams into the Pacific Northwest which could bring another deep dump to the Cascades Sunday-Monday.

Enjoy the Powder everyone!  It’s nice to have so many choices!

Please consider a donation to support our forecasts or join our custom concierge program.