Ski areas can sometimes feel like the wild west out there.

You might see some carnivorous wildlife, be visually assaulted with a naked skier, or you just might get lucky enough and see a tragic plane crash like one of followers.

Peter S: “Before ski brakes, spring skiing, base area sitting enjoying the sun with lots of people doing the same. When I heard someone screaming SKI,SKI I looked up and there was a runaway ski headed into the base area. It ended up hitting one of man’s best friends, a dog. So sad. Will never forget!”

Matthew E: “I puked a nice long streak of red gatorade while traversing Frenchmen at Keystone to stop. Multiple people stopped and thought I was “shot” while skiing.”

Matt H: “In 70+ mph winds at Bachelor my 6 yo daughter was being blown up the runs backwards I had to pull her down the hill” Charlie S: “A dead moose at the bottom of the Kitchen Wall at Stowe with a Sugarbush lift ticket on it’s ear.”

Martin H: “On yet another deep Jay day, I had a grouse come up out of the snow between my skis n hit my buddy in the chest… good thing he’s a patroller🤣”

Geoff G: “The wing of an airplane sticking out of the snow in the backcountry from an old plane crash”

Daniel R: “Saw a plane crash on the backside of the mountain we were on and saw helicopters flying parts of the plane out the rest of the day”

Bob Z: “Shane McConkey skied by me in a Bear suit” 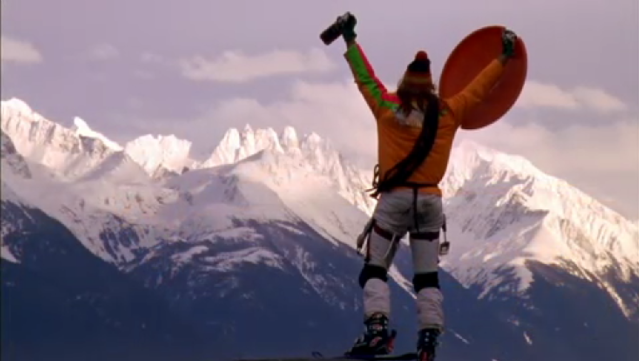 Eric J: “Bear sleeping under the chairlift. 350 racers one trail away. Two years in a row. If not mistaken. Gunstock.”

Liz C: “A lynx sitting at the top of the chair in the woods watching all the ski school groups get off on High Meadow at PCMR Robbie P. got a pic!”

Scott: “Two moose chilling on a run at Breckenridge”

BC Powder Freaks: “200 santas while on shrooms”

James C: “A wolf, with a squirrel in its mouth.”