More Powder For The PNW, Sierra, and Rockies

More Powder For The PNW, Sierra, and Rockies

There are several options this week. The trend is for several feet of snow for the Pacific Northwest with slightly cooler temps, decent dumps in the Wasatch, Tetons, and even the Sawtooth Range of Idaho

Announcement: We have partnered with our top pick for Alaska Heli Skiing owned an operated by folks we trust. Alaska Backcountry Guides offers small group high end service and more powder. They are already getting booked up so consider Alaska as a reprieve from the wild ride we have had this season. Mention Powderchasers for a special discount! You won’t go wrong with this outfit if you like powder and small groups.

Hey, it’s back to work week with the New Year! The new mode of operation has made it hard to distinguish midweek, weekends, or holidays. Will we ever return to a normal regime? I have low confidence. Powder is in the forecast once again for the west. Time to look for reservations! If you want to score very detailed weather info, specific resorts and timing of where we are chasing, join our Concierge Program. This is a good value especially if you score deep powder all season.

A vigorous storm system currently in the Cascades is going to land deep snow totals (12-15) once again on Monday for many areas. Temps are cool enough for mostly snow at the bases of with the snow level dropping during the day. Crystal as of 5 AM had 7 inches Monday morning and it is still dumping. Winds are strong and temps are near freezing at the base. Cooler temps will be found in the northern Cascades. This is a chaseable storm, but snow density is not ideal, nor are the current winds. After a brief break on Tuesday, more snow moves in for the evening through Wednesday. A warm front will bring snow levels briefly up in the southern Cascades with cooler temps, easterly flow (Pushes colder air into the mountains from the interior) found in the central Washington Zones. It’s a respectable storm and a bit cooler than the previous ones. Oregon will see lower amounts, however still respectable. The northern Idaho Panhandle, near Selkirk Powder in Sandpoint will accumulate decent quality snow for Wednesday/Thursday.

The Sierra is in the spotlight for 4-7 inches at lower elevations and 9-11 above 7,000 feet Monday/Tuesday Caveat: Strong winds! Ride powder on Tuesday. Some lifts will have wind holds on Monday.

Below: Total snowfall for the Sierra through Tuesday morning (Might favor the central or northern areas versus the south). All ranges will see snowfall with the highest amounts over 7,000 feet. 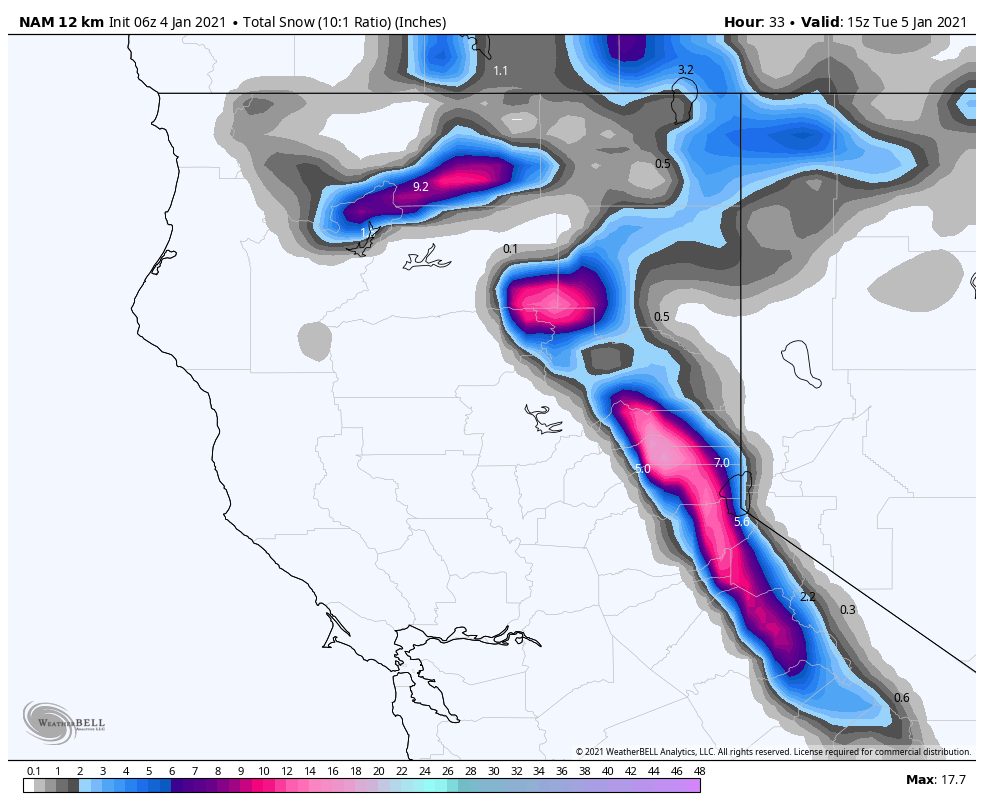 The PNW system pushes into the Rockies on Monday with winds from the SW. That will push a good fetch of snowfall into the Sawtooths with moisture then aimed east towards the Tetons and Wasatch. Late PM Monday could see some decent amounts for Sun Valley with an additional 5-10 inches for Tuesday morning (Snowfall totals in the 7-14 inch range).  The models show decent amounts for both the Tetons and Wasatch for Tuesday morning. Wyoming is likely to be in the 6-12 inch range while the Wasatch in the 5-10 inch range. In Utah, winds start from the SW favoring the northern zones Monday night (Snowbasin, Beaver Mountain) and may also favor Big Cottonwood versus LCC. Park City can sometimes do well in this pattern as well. Winds shift to the NW Tuesday morning that may enhance totals for Little Cottonwood Canyon. The issue is the atmosphere is not as moist once the winds shift (Time Height Guidance). The models generally show 5-10 inches for the Cottonwoods. The NAM 3 shows much higher amounts. I suspect most mountains in northern Utah score 4-9 inches by Tuesday morning, with perhaps 5-12 inches in Big Cottonwood and perhaps Beaver or Snowbasin. Alta could kick in with NW flow Tuesday morning but it’s a wildcard. If that happens another 3-7 inches could fall on Tuesday on top of what happens Monday night.

Below: Temps at 10K (Celsius) feet are warm initially Tuesday afternoon and evening for the Rockies (Denser snow). Temps cool on Tuesday with better quality at the tail end of the storm (Warm SW flow switches to the NW). 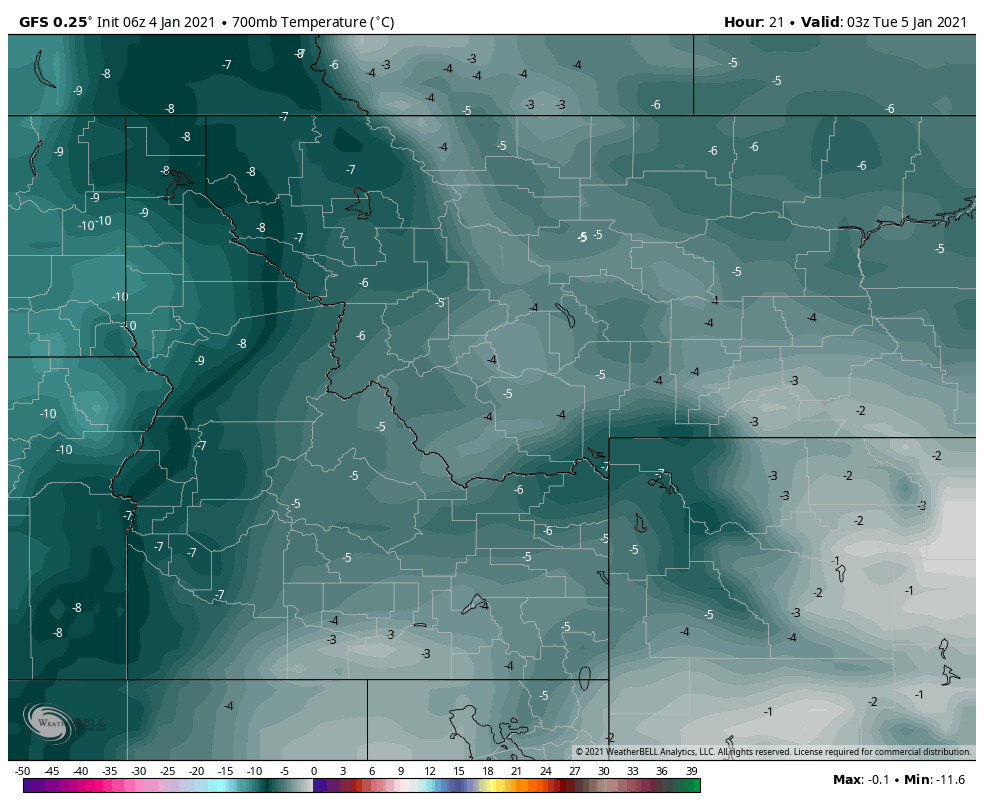 Below: Early Tuesday Morning snow totals (Additional snow will fall in some areas into Tuesday mid-morning). 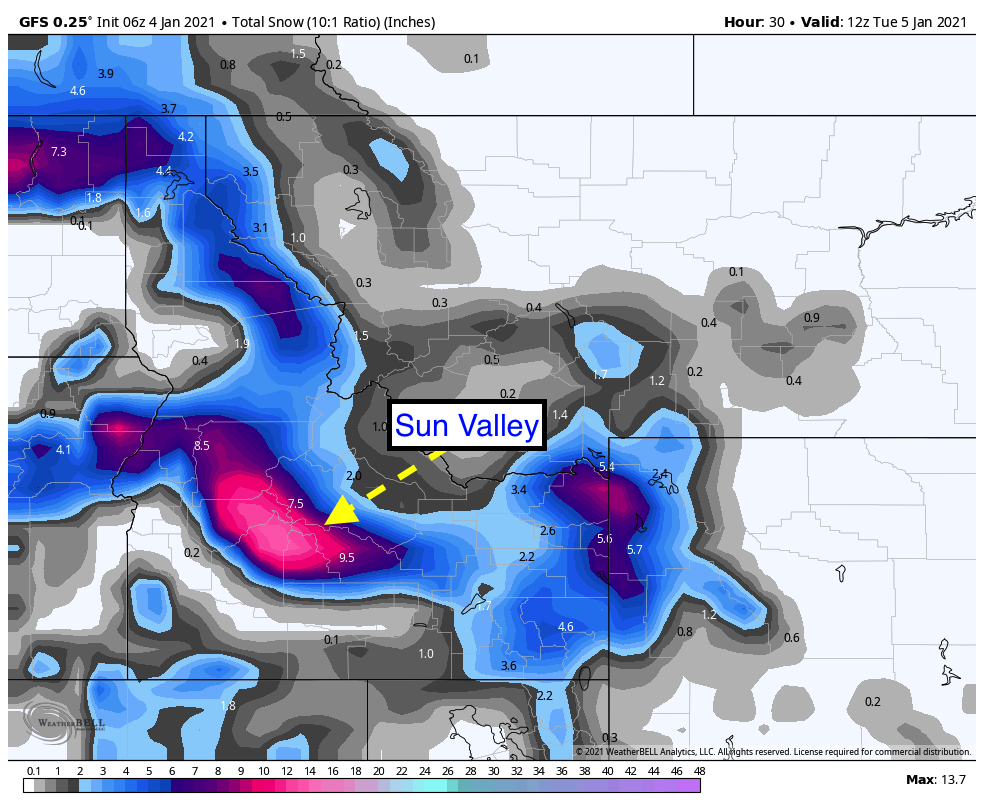 Below: Ensembles for Alta Ski Area showing a mean of 9 inches with some of the models runs showing up to 15 inches and others even less. There is lower confidence in the higher solution. 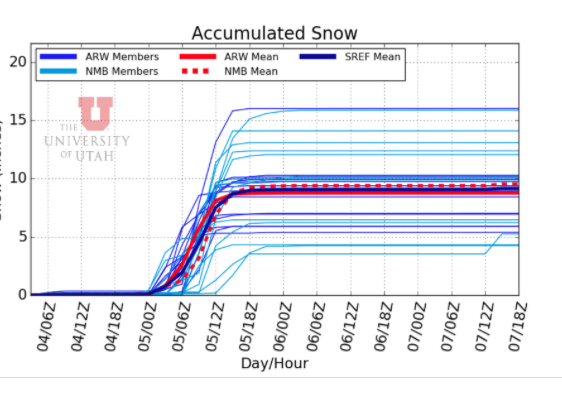 For Colorado, leftovers begin Tuesday morning. Steamboat and areas north or along I-70 are favored. This is generally going to produce 3-7 inches for many mountain locations of Colorado with one caveat. Winds shift to the NW that could kick totals higher for Steamboat, Vail Pass, and even Breckenridge. I am more bullish for areas north of I-70.

Below: Ensembles for Steamboat showing low confidence (Widely spaced lines) for anywhere from 5-12 inches Tuesday/Wednesday). This leads me to believe that there could be an uptick wildcard outside my general forecast of 3-7 inches. 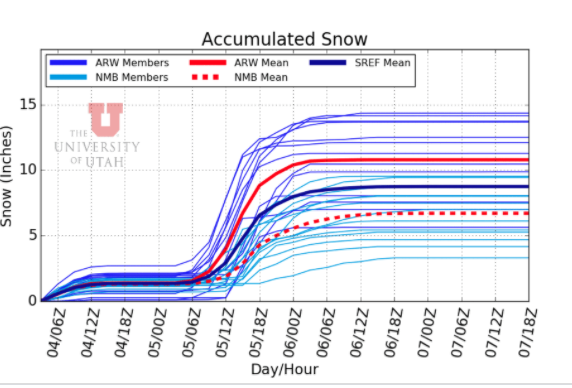 The ensembles show a continued trend for unsettled conditions in the Pacific Northwest mid to late this week. Most of these systems weaken as they move east this week favoring some snowfall for the northern Rockies. The models show a decent chance of a better storm for the Sierra and even the Rockies by the weekend.
The longer-range may put us into a ridge of high-pressure mid-month with a trend for perhaps storminess to return to the Rockies at some point around January 18th.

Below: Low-pressure Trough this upcoming weekend is likely for the west. 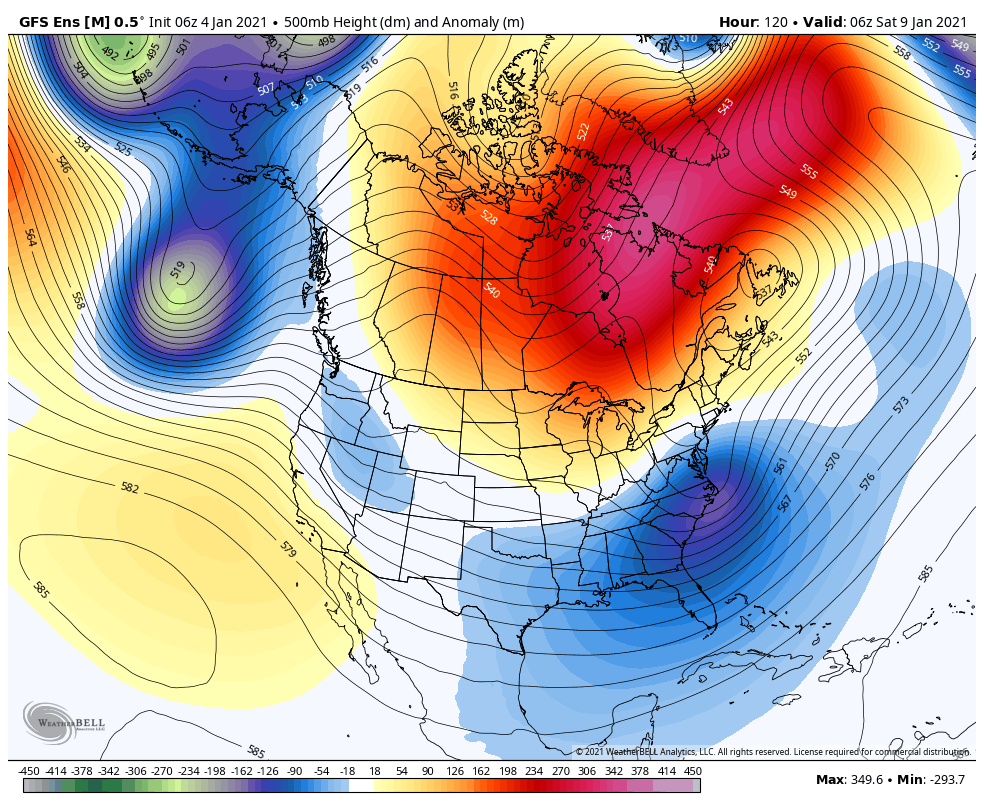 Below: We might see a ridge of high pressure in week #2 with the jet forced north into Canada. 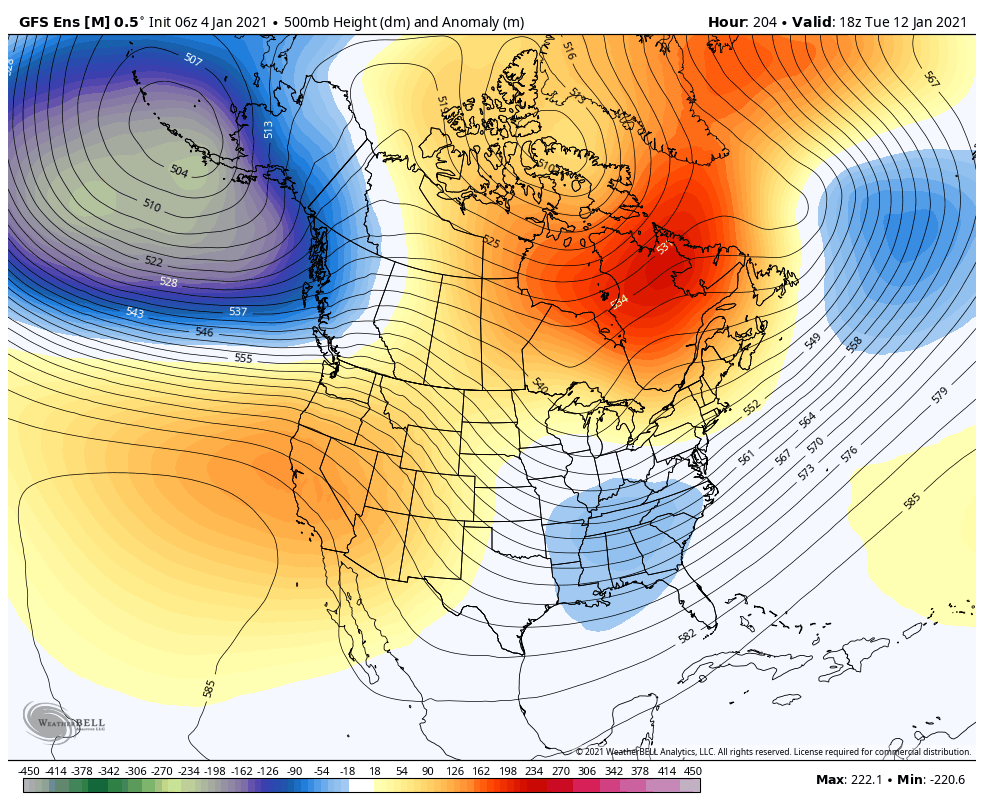 Enjoy the Powder everyone!