As one storm departs the Rockies, another is on it’s heals for mid to late this week. The departing storm nailed south-central Montana with a 29-inch dump in 48 hours. The next series of storms will favor Montana, West-Central Montana, Tetons, North-Central Colorado and to some extent the Wasatch. Significant snow will be falling by Wednesday night-Friday at many ski areas in the West.

The departing storm performed close to my update from Sunday night posted on Open Snow. Higher Dendritic Growth at lower elevations (Higher temps) created less snow for the upper Cottonwoods (4-8) and up to 20 inches plus for the benches near Salt Lake City (Sandy). Too low of a temperature zone (Below -14C) won’t formulate the same shape/size flakes and creates less deepness (Almost like tiny duds falling from the sky at the upper atmosphere).  We don’t see this happen often, as it’s a true bummer when you drive through over a foot of pow to a ski resort only to reach the base area with 4 inches.  As forecasted the northern Wasatch came in ahead with the winner in Utah being Cherry Creek 20 inches.  Powder Mountain takes the 2nd spot with 12 inches as of the first chair on Monday.  Snow continued for most of the northern Wasatch Monday morning. The big winner as highlighted on my 2 earlier posts was Red Lodge Mountain Ski area who reported 29 inches on Monday morning (Southern Montana).  They scored deep pow both Sunday and Monday.

The Colorado Mountains came up short on the eastern side of the ranges (3-5 inches) and on target for the western corridor (4-8 inches). Winds remained W/NW on the west side of the State initially and N, NE on the Eastern side.  That helped push decent totals into the Vail Valley including Beaver Creek.

The Tetons completely missed the mark with storm totals in the 5-inch range on Monday. The models still showed 8-11 inches for the Tetons even late Sunday night (HRR was at 12-15) only to wake up with 5. The GFS and Euro were less bullish Sunday night.

Snowbird is reporting 18 inches in 24 hours which I believe to be an error.  It’s a hidden fact that Snowbird takes their snow totals from Alta’s Collins stake.  That stake is at around 8 inches (Storm total). I can’t validate this report they issued this morning.

Here are a few totals from the last storm.

The next storm to impact the Rockies will deliver warmer temps (Snow at lower elevations could be a bit creamy at some ski areas) and a healthy dose of pow to a broad area of the Rockies. This will be a significant event for many ski areas.  Things get active in western Idaho (Brundage, Tamarack) Wednesday- Thursday and migrate over to central and southern Montana (Bridger and Big Sky), Tetons and the Wasatch by late Wednesday night into Thursday.  10-18 inches are likely for many of these areas by late Thursday. It’s too early to speculate on who will see the highest amounts (Looks like a fairly even spread). In Colorado, snow will be falling Thursday/Friday.  This storm fits the profile of a typical winter event with West-Northwest flow, Heavy snow along and west of the Divide peaking Thursday afternoon and night.  You will be able to ride Powder both Thursday Mid-morning-/Friday with even some freshies on Saturday.  The models are looking very hopeful for a 12-18 inch event for many ski areas favoring the central and northern Mountains.

Below: GFS and Euro are on board with a significant winter storm to impact many areas of the Rockies this week.  You can almost roll the dice and pick from western Idaho, Wyoming, Montana, Utah or Colorado.  Even better, chase from Montana to Utah and end your trip in Colorado on Friday or Saturday.

Below: The next series of storms mid to late week will usher in warmer temps for the Rockies and snow levels in the 5500-6,000 foot range.  Denser snow is likely especially at lower elevations.  The map is for Friday morning and temps in Celsius at 4800 feet. 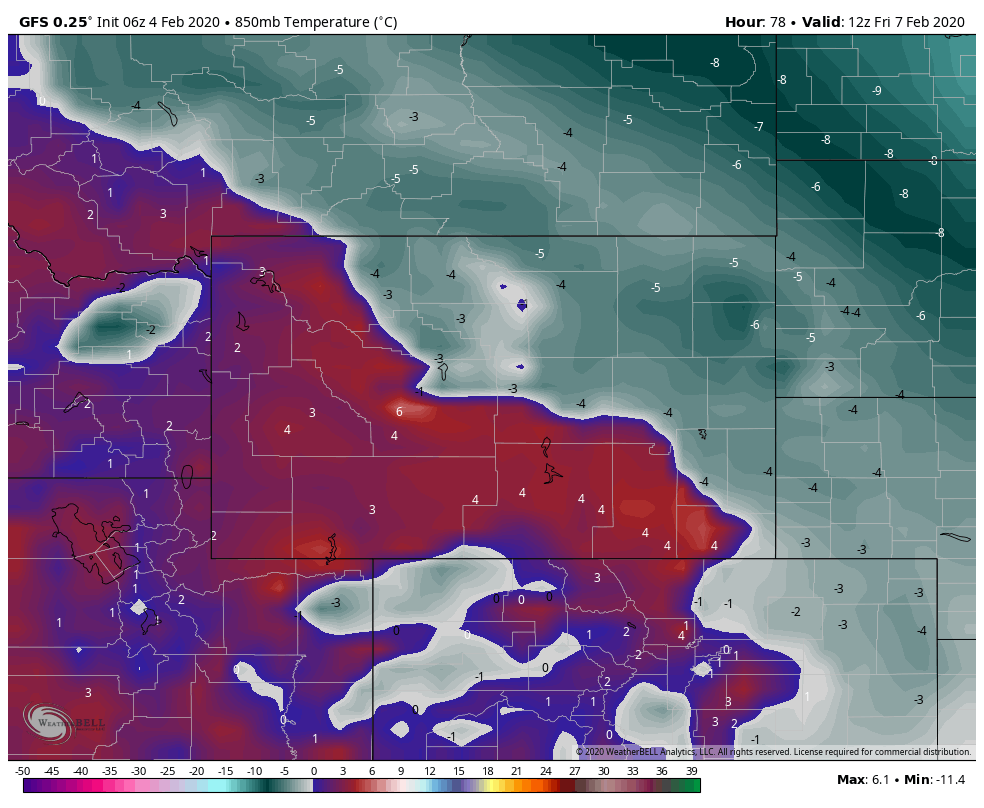 In the Northwest warm and wet conditions mid to late this week will migrate to a decent storm for the Cascades (Cooler temps) for Friday night into Saturday.  This might be a storm to chase!

Enjoy the powder everyone!  SIGN UP FOR OUR CONCIERGE PROGRAM FOR CUSTOM CHASE FORECASTS AND TO SUPPORT POWDERCHASERS.