Powder Alert! 2-3 FEET For The Rockies

Powder Alert! 2-3 FEET For The Rockies

Its time to get excited! 2 storms next week will bring strong cold fronts both Sunday night/Tuesday and again Thursday/Friday. Several feet of snow will land in the Rockies including areas that have been left short this season. Chase Monday-Friday and find deep rewards! I am not able to chase powder beyond Monday. My stomach will sink to all-time lows as I attempt to forecast each day Living Vicariously through you.

The PNW got soaked with rain over the past 24 hours. It’s in the low 40s at the base of Stevens as of 6 PM Friday (Press time).  Saturday morning will offer a glimmer of hope as temps cool to 4,000 feet (Freezing level) with light to moderate snowfall for the Cascades from Mid to upper mountain.  Stevens Pass is likely to get a convergence zone enhancing precip somewhat late AM Saturday to the evening (5-9 inches).  Is it worth chasing?  Expect frozen mank below, Cream from Saturday morning, and decent density powder by PM topping the coatings below.  Did that answer the question?  Perhaps the summit of some resorts salvages out a powder day by last chair Saturday.  Whistler is going to see 5-10 inches of wet snow above Mid Mountain with perhaps higher amounts at the summit for Saturday morning.  Inland BC including the Alberta resorts will grab moderate to perhaps heavier snow with cooler temps for Saturday.

The Rockies will score nicely next week!  The weekend is warm before a  significant cold front reaches the Tetons, Wasatch, Gallatin Ranges (Montana) late Sunday night.  Strong frontal passage will be occurring after midnight Sunday.  The Models differ slightly on the positioning. The Euro brings higher amounts to southern Montana, northern Tetons, Including Red Lodge Mountain for Monday morning (Areas we have not talked about in a while). 8-10 inches or more are likely in these locations (Higher amounts for the Wind River Range, Central Wyoming, and perhaps Red Lodge Mountain).  The GFS drops slightly higher amounts near Jackson with a bit less in Montana.  Several runs previously also showed Montana in a good scoring position.  Plan to ride Monday morning in any of these areas. Travel on Interstate 80 will be very difficult to chase on Monday. Be in position midday Sunday.

In Utah, the models are bullish for the entire Wasatch Range late Sunday night into Monday. Park City, Powder, Beaver all should be reporting 7-9 inches for first chairs Monday. Additional snow will fall during the day. The Cottonwoods may see 9-12 inches by 9 AM Monday.  Additional snow will fall during the day. Models are pushing heavy moisture into the Salt Lake Valley Monday including the Cottonwoods that will likely score higher amounts.  NW flow will keep light snow showers going into Tuesday morning. Storm totals may exceed 15-18 inches by late Monday or Tuesday.

In Colorado aim to chase mid-morning Monday to early Tuesday.  Models are complex. Western Colorado may stay in the W-NW wind direction favoring Vail Pass, Beaver Creek (West is best), Copper, including western sections of the I-70 corridor.  NE flow over the Front Range will favor Rocky Mountain National Park and the Front Range Foothills. It’s possible that very different totals land between just 10-20 miles apart between eastern and western Summit. depending purely on the wind, orographics, and the intensity of the bands that set up over I-70. It’s too early to speculate details.  The southern sections of Colorado are also highlighted on the model runs for the eastern San Juan range (Wolf Creek).  They may see 4-8 inches by late Monday.  Other spots in Colorado will range from 7-13 inches for Tuesday morning (Early speculation that is likely to be adjusted).

Below: University of Utah ensemble runs NAEFS which are often overdone, showing an average of 12-15 inches for Berthoud Pass by late Monday.  Lots of discrepancies still exist on these lines (Fairly wide-spaced) and we are too far out to pull the plumes from the short term SREF (Less overdone). 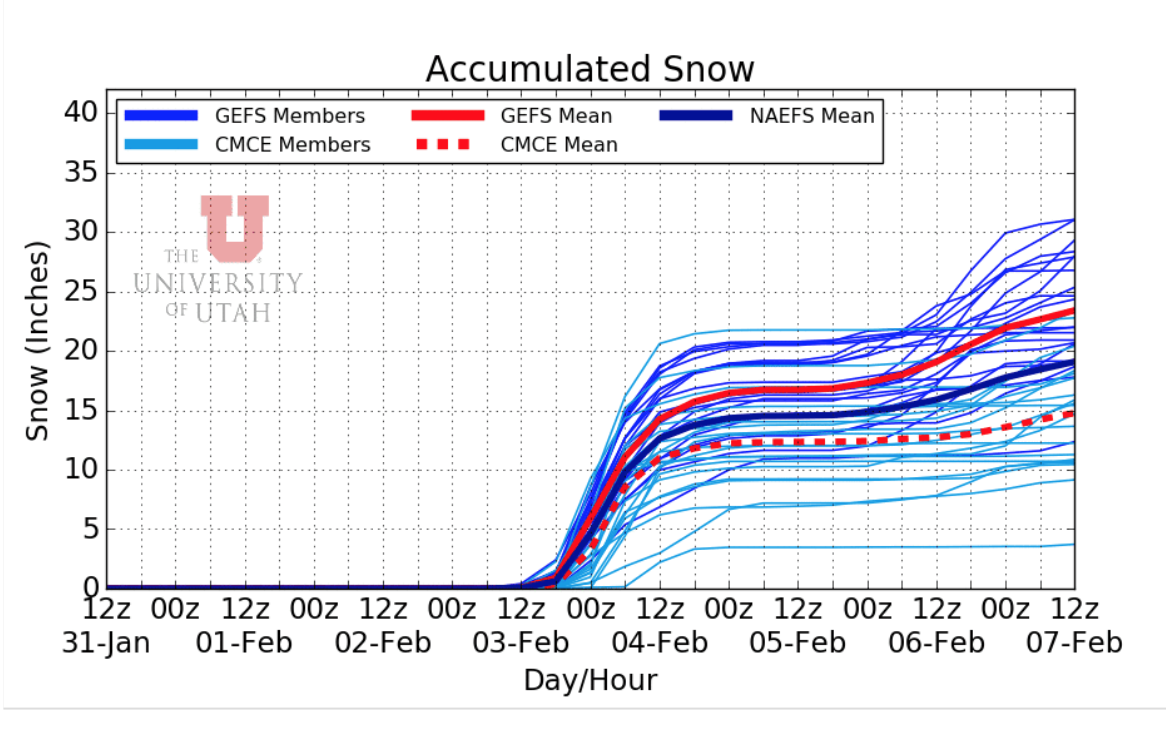 Below:  Same data as above but shown for Vail Pass (Widespread lines from 5-14 inches by late Monday) 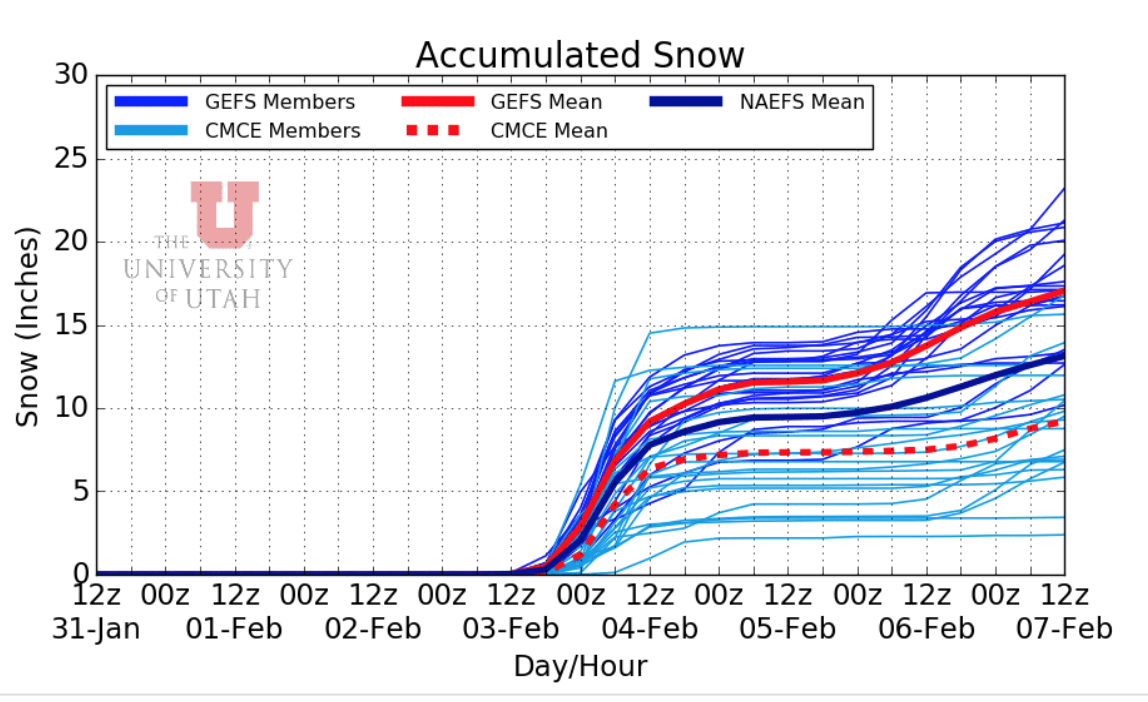 While the short term forecast is exciting, the long term brings a second and deeper short wave trough through much of the northern Rockies late Wednesday to Friday.  Moderate to heavy snow is likely for the southern Panhandle of Idaho through Montana (Montana Snowbowl is in scoring position) midweek.  The pattern will shift south into the Tetons and Wasatch by Thursday morning and into Colorado Thursday AM to Friday AM.  Significant snow is likely to favor many resorts. Widespread totals on storm #2 will range from 1-2 feet.

Below:  Total snowfall through Friday (Includes the early and late-week storm).  Very appreciable amounts in a widespread area of the Rockies. 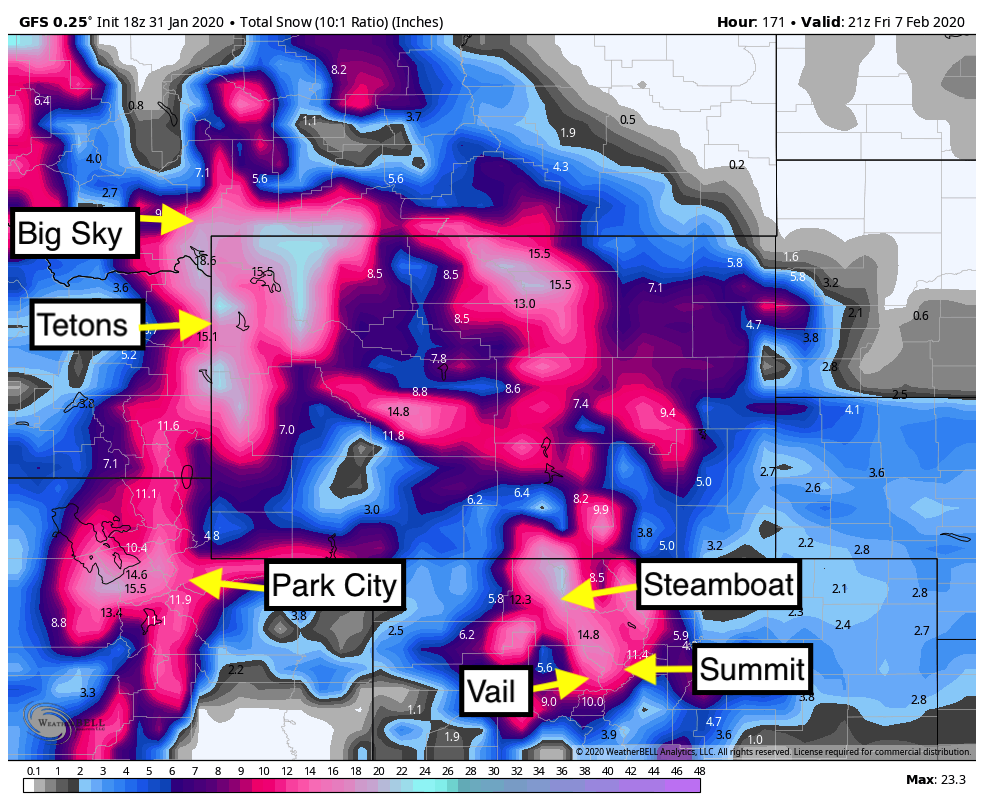 Please support us by signing up for the custom concierge program (We will send you to the deepest snow).