Where Will Santa Be Scoring Faceshots on Christmas?

Where Will Santa Be Scoring Faceshots on Christmas?

Snow is falling lightly in the Sierra Monday morning with up to 9 inches at lower elevations overnight for Mammoth (Telemetry), and 7 inches further north to Squaw (Telemetry). The bulk of moisture has dropped into southern California where heavy rain is falling. That system will swoop into the 4 corners with steady light to moderate snow bringing powder for XMAS EVE and XMAS day for many ski areas. Another system further north is going to graze the Tetons with some freshies. Your best odds for pow are the southern Sierra, 4 corners, and perhaps the Tetons in the next 2-3 days. Arizona is included!

Light snow is going to continue in the Sierra today with an additional 1-3 inches for many areas. Slightly higher amounts are possible towards Mammoth as the bulk of moisture has passed south and to the west of most ski areas. It’s possible that Big Bear is scoring higher amounts closer to the metro areas. Yet, another wave of perhaps heavier snow may move in as the lifts are closing Monday bringing another round of light or moderate amounts for Tuesday morning (2-5).  In all total, most ski areas in the Sierra should exceed a foot of good quality powder for snowfall that includes the Monday morning report through Tuesday. Light snow will continue into Tuesday (Dry density). Look for new openings in areas that may have closed early on Sunday.

That system takes a southern route over Arizona where 5-10 inches will fall in the higher peaks around Flagstaff late Monday through Tuesday. Snow will be falling as far south near Tuscon where Mount Lemmon could also see 5-10 inches. The Snowbowl will be relatively deep by last chair Tuesday.

The trend for the week is for continued waves of moderate events for Arizona bringing an additional 6-9 inches to the Arizona Snowbowl in several periods this week. It appears that both Wednesday and perhaps Friday will both be decent powder days, however, snow will continue to fall with few breaks in between each wave.  There might not be any single 12-inch event but the sum totals will be in the 12-20 inch range by Friday. Snow continues to build all week. You can ride pow Tuesday/Wednesday/Thursday and Friday in the dessert Southwest.

In Utah, your deepest powder will be found in the southern regions towards Eagle Point and Brian Head Tuesday morning through Wednesday (5-11 inches).  Some moisture will stream north into the Wasatch under SW flow that might favor Big Cottonwood or even the Park City mountains late Tuesday/Wednesday. There is some enhancement on the models noted in the Wasatch range late Tuesday so it’s possible that some sneak up amounts develop further north into Snowbasin and even towards the Idaho border near Beaver Mountain by Wednesday morning.  Amounts are going to be light (3-6) but with colder air and higher snow ratios, it’s possible that slightly higher amounts fall, especially in the Cottonwoods for Wednesday morning.  Meanwhile further north in the Teton Range, a separate piece of energy meanders over the Jackson Valley favoring areas in the National Park and Yellowstone. It’s likely that light to moderate refreshing happens Monday night into Tuesday with 3-6 inches of snow for the summits of JHMR and Targhee. Yellowstone and areas north to the Montana border may see higher amounts.

Below: Total snowfall through late Tuesday (XMAS EVE) favoring southern Utah and most of Arizona. 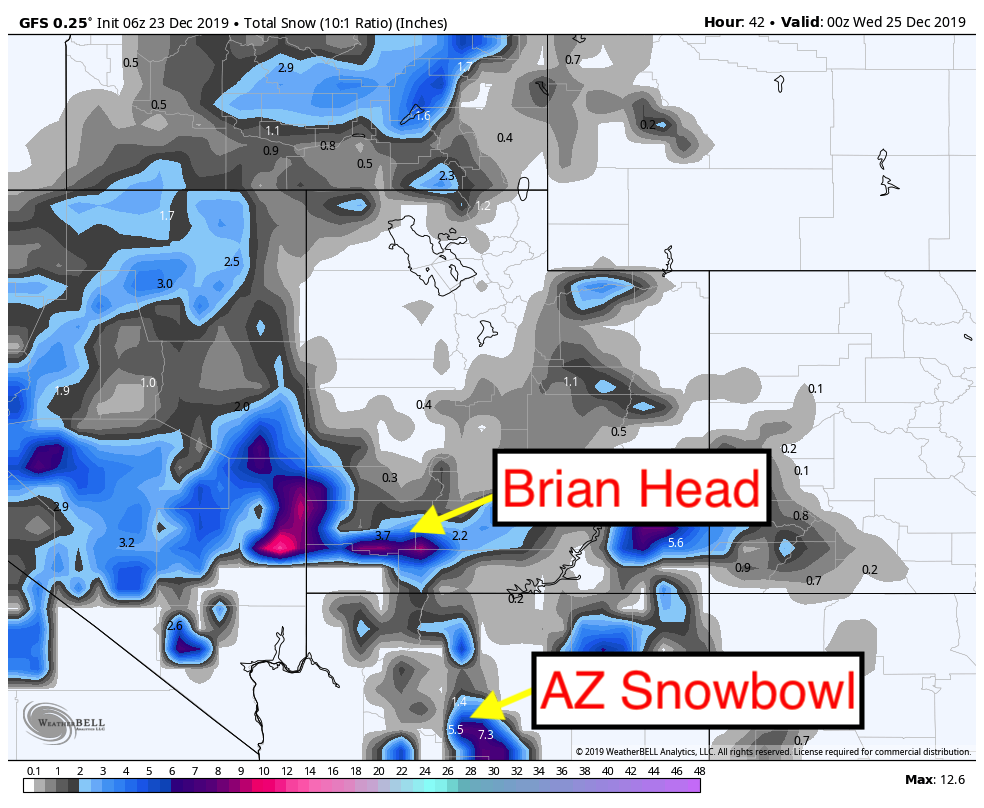 In Colorado, if you jonsing for pow, consider the 4 corners for XMAS Day. Wolf Creek, Purgatory, and Silverton are all in the targets for 5-10 inches of pow. Light snow is likely favoring the western side of I-70 towards Aspen or further north to Steamboat (2-4).

Below: XMAS Day pow for the 4 corners of favoring Colorado with lighter snow for New Mexico. 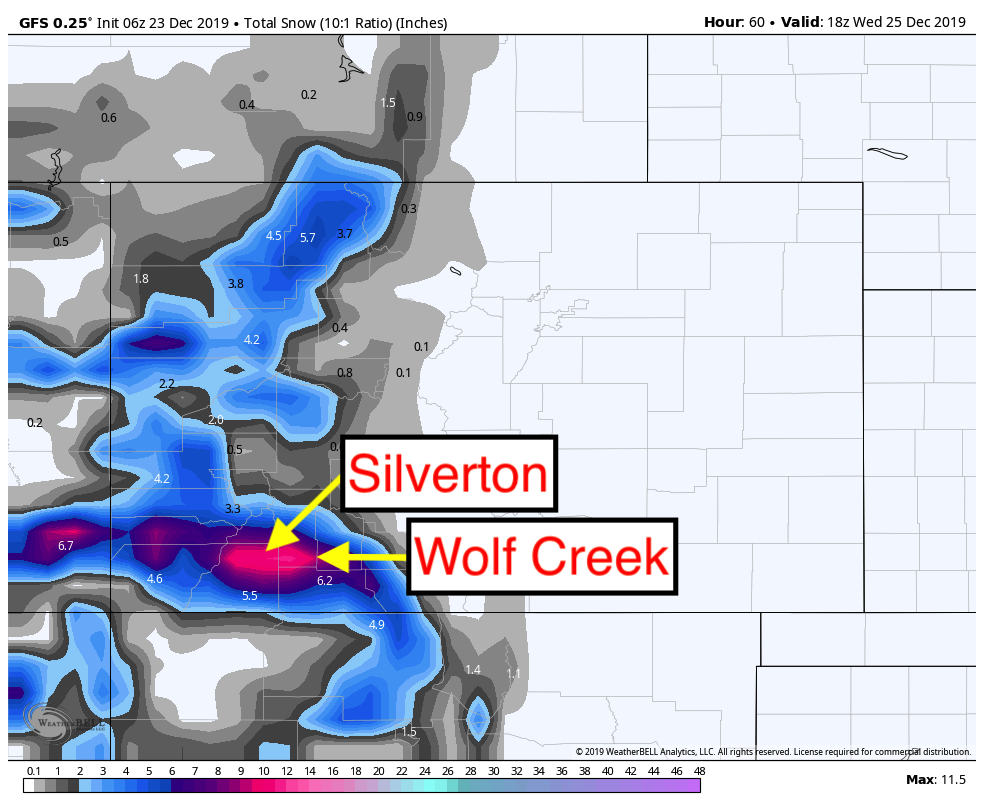 BOTTOM LINE SANTA:    Santa will have no issues skirting over the Sierra this week with fresh snow, even at Pass levels.  The Pacific Northwest saw mainly rain at lower elevations so some slowdowns will likely as his skegs drag sparks over the Cascade passes (He will likely take upper elevation routes where several feet of snow just fell).  As he approaches the Tetons he will glide into Jackson. Folks in the southwest will see presents early, as Santa makes his way down to Arizona, southern Utah, and Colorado. His Elfs will be soaking up faceshots in the southwest. Unfortunately, it’s a dry ride through the Midwest and New England as he finishes up delivering presents early XMAS morning.  Darn- Santa is going to miss a dump in New Mexico late this week!

The extended range brings another push of moisture to the southern 4 corners Friday/Saturday.  AZ will once again be targeted for another round of moderate of heavy snowfall.  That system might push into New Mexico with a good push of snowfall for northern areas extending up into SE Colorado by Saturday.  It’s possible that Taos, Ski Santa Fe, and others may score by this time period.

The timeframe after the weekend into next week brings a return to dry weather for the Sierra and Rockies with models hinting at a very wet period for the northern coastal regions of BC (Favors northern BC), Alaska, and perhaps the interior of BC. Some significant snowfall is likely in these areas.

Below: The ensembles bring an unsettled pattern for the northern areas favoring Alaska, and the northern portions of British Columbia (Coastal and inland). 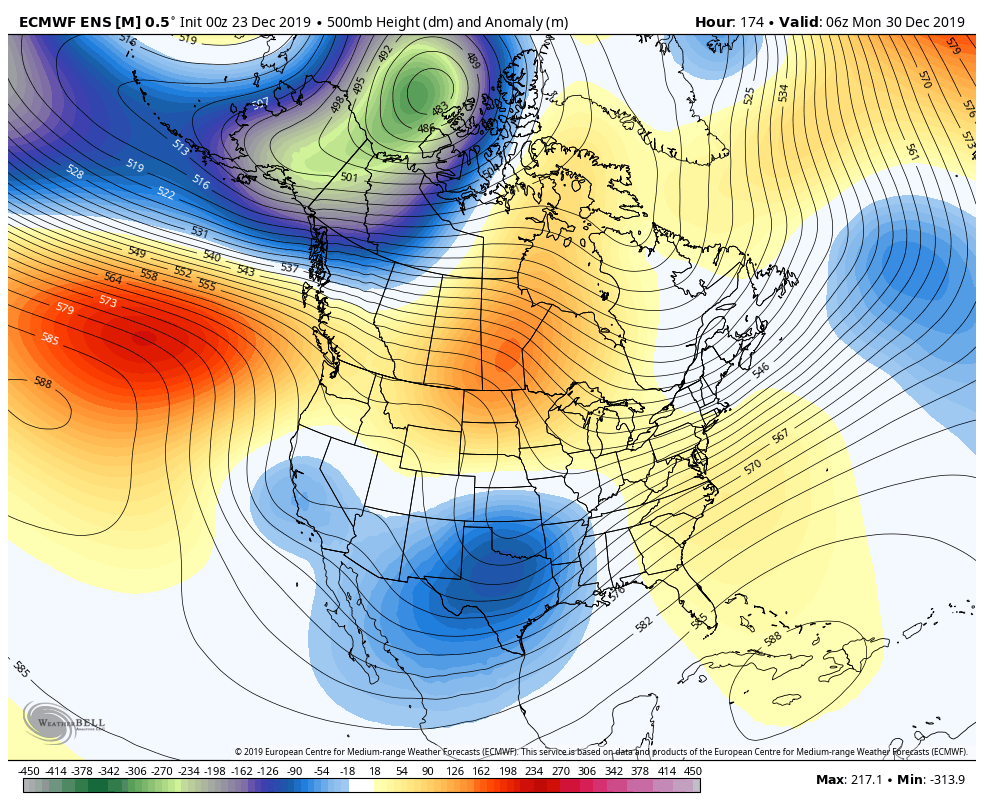 Enjoy the Holiday everyone!  Please support our sponsors and consider our donation or concierge program for custom powder forecasts (Never miss a powder day).