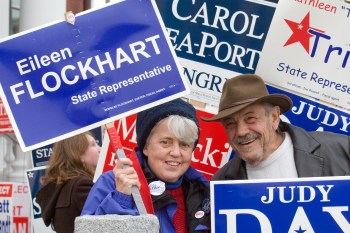 Jackson skier, liquor store clerk, and Seattle Seahawks superfan William Houston spent yesterday evening like he would any other Monday night during the fall. He watched football, drank beer, and ate wings with his friends at The Bird before Seattle locked down a 5-2-1 record– a victory that was apparently worth sacrificing this year’s general election result.

According to the Jackson Hole Tribune, Houston told reporters from his couch on Kelly street this morning that he got, “pretty tuned-up last night” and would not be making it to the polls today to cast his vote.

“The only place I’m headed today is the bathroom,” said the ski bum with a look of anguish on his face. “I haven’t voted since Obama’s first term and after last night, it looks like I’ll be waiting another 4 years.”

Previously, Houston voted for the Democratic ticket when Obama/Biden faced off against the McCain/Palin ticket in 2008. Yet 8 years later, the ski bum has apparently lost his appetite for voting.

“I mean, if this election mattered– like actually mattered, maybe I’d drag myself to the polling center down the street. Either way, the election was bought and paid for last November– just ask Bernie Sanders.” – William Houston, Liquor Store Clerk/Ski Bum/D.C. Insider

It was at this point that Houston headed to the bathroom, leaving reporters on a musty couch that had been picked up via the local non-profit– Habitat for Humanity some 6 years earlier.

Mr. Houston described himself as “unable” to cast a vote | Photo Credit: DieselDemon

After almost a half hour, Houston reemerged from the bathroom mid speech, “I mean if I had requested a mail in ballot, I could have gotten Trevor to drop it off on his way to work.” But that too, he said was too taxing. “If I’m going to vote legit, I’d have to check on all the candidates and who has time for that… Also where in the hell would I find these assholes’ stance on legalizing marijuana in Wyoming.

When asked if he would watch the election results and exit poll coverage this evening, Houston replied, “yeah, I mean… there’s no playoff baseball going on– so why not?”